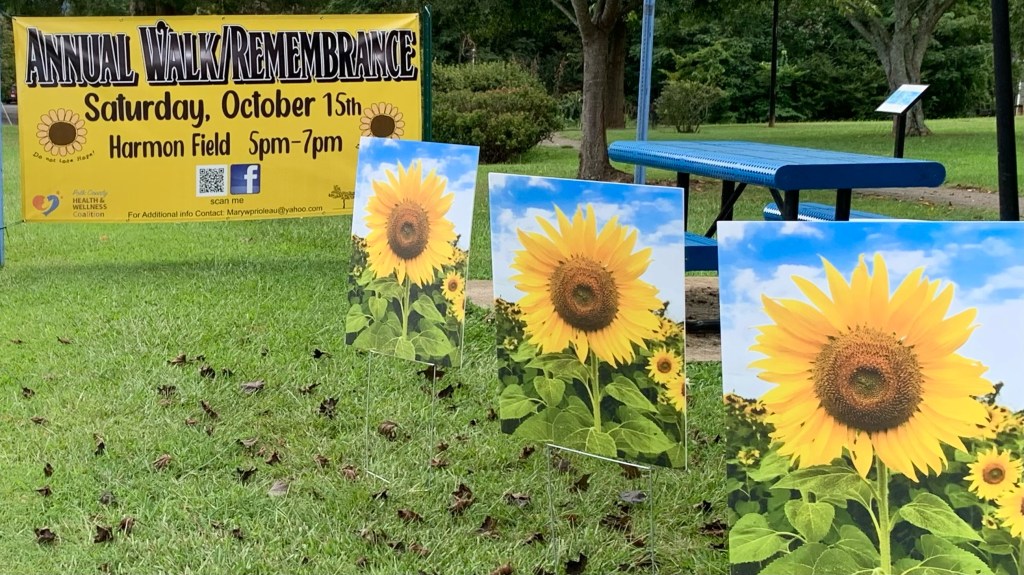 Sunflower banners at Stearns Park are “planted” to raise awareness of suicide, overdoses, and mental health issues in Polk County and across the country. (Photos submitted by Mary Prioleau)

Stearns Park in Columbus is once again filled with sunflowers. But in this case, they are on display to mark a sad milestone in American life.

According to Mary Prioleau, “there are 140 sunflowers reflective of daily ‘lost potential’ in the United States alongside a banner with 132 lives lost due to mental health issues inclusive of suicide and overdose.”

The numbers fluctuate, she says, and there’s not enough room at Stearns Park to display a sunflower for the actual daily losses in the US.

Data from 2021 reflects 126 suicides and 207 overdoses daily, Prioleau says, adding that Polk is the top county in North Carolina with mental health-related deaths.

The Community Health Assessment again, for the third year, has ranked mental health as the number one issue in Polk County.

This display is funded by Polk County Community Foundation as a collaborative effort between the Polk Health and Wellness Coalition and Polk County Sheriff’s Office in support of the ‘Do Not Lose Hope’ movement.

The goal of the ‘Do Not Lose Hope’ movement is to end the stigmas associated with mental health.

On Saturday, Oct. 15, the 8th Annual Walk/Remembrance will be held at Harmon Field from 5-7 p.m.

Prioleau, Remembrance organizer, says that as an added bonus, St. Luke’s Senior Services will be hosting a Fall Family Fest from 4-6 pm in the same location. Helpful resources will be on site. Further information will be released soon.

Sunflower banners at Stearns Park are “planted” to raise awareness of suicide, overdoses, and mental health issues in Polk County and across the country. (Photos submitted by Mary Prioleau)