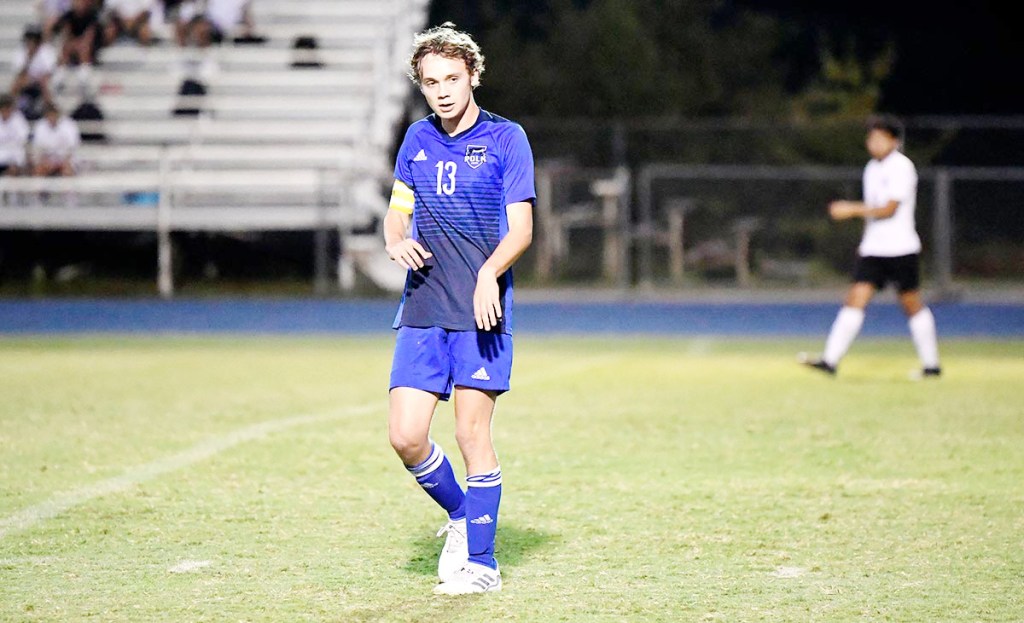 Nights such as Monday reaffirm what all connected to Polk County’s soccer program believe – victories are soon to be had.

True, the Wolverines fell 4-1 to a Patton squad that many expect to sit atop the Mountain Foothills 7 Conference by season’s end. The Panthers (8-1, 1-0) scored twice in each half to leave G.M. Tennant Stadium with a victory in hand.

But Polk County (0-6, 0-1) notched two season firsts – goal and lead – and might well have been positioned for an upset save for two lapses on corner kicks in the second half that became Patton tallies.

“One thing we’ve got to work on is challenging corners,” said Polk County head coach Matt Corn. “The guy basically walked in and we didn’t go out and challenge him.

“But I’m very proud of them. They play with so much heart and effort. I keep telling them that with the hard work and performing like that, it will produce something.”

That effort did produce a Wolverine goal in the 20th minute, Elliot Whiteside taking a bending free kick from some 40 yards out that missed a cutting teammate in the penalty area, but took one bounce and skipped into the upper left corner of the net, giving Polk a 1-0 advantage.

Goalkeeper Cade Bright was peppered all night with Patton shots and turned aside nearly all. Bright had a flurry in the 10th minute during which he deflected away three straight blasts, then also turned aside repeated attempts in the 14th minute.

Patton, though, finally slipped two shots past Bright in the closing minutes of the half, goals by Alex Buckner and Abraham Miguel after both found open space deep in Polk’s end.

Bright stopped a Patton penalty kick early in the second half to keep the margin at one goal, but the Wolverines could never get an equalizer, and Buckner turned those two corner kicks into successful scoring headers twice in the final 15 minutes for the final margin.

The end result, though, frustrated Corn but did not disappoint him.

“It’s coming along. I’m seeing a lot of progress,” he said. “It’s just going to take some time.”

Polk next returns to action on Wednesday, traveling to Hendersonville for another conference match.