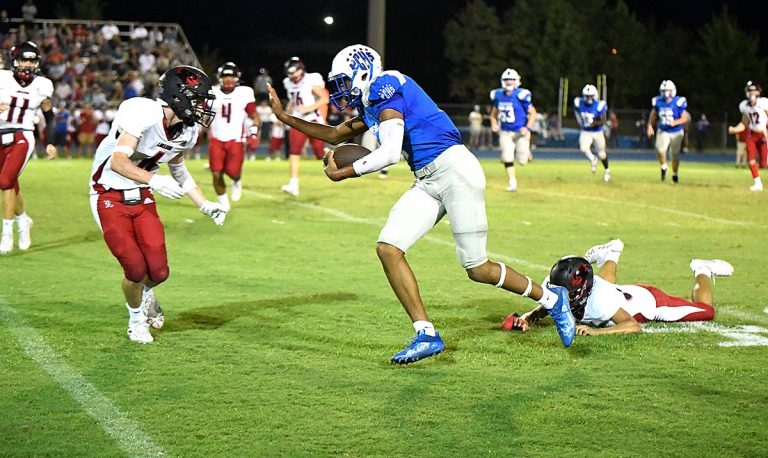 If you’re going to renew a rivalry, might as well have a record-setting night in the process.

It had been five years since Landrum and Polk County last met on the football field, and the Cardinals perhaps left G.M. Tennant Stadium on Friday evening wishing the interval had been six. The Wolverines racked up almost 550 yards of total offense in rolling to a 49-7 victory in the 30th meeting in the series between the neighboring programs.

The 42-point margin of victory matched Polk’s highest in the series, equalling the 42-0 gap in the 2008 matchup. Landrum played without leading rusher Colton Link and Polk had starters sidelined as well, but the remaining Wolverines delivered ample highlights:

Antonio Simpson set a school record for most yards receiving in a game, catching six passes for 224 yards and two scores. That broke Richard McEntyre’s mark of 221 set in 1996 against Landrum. Simpson also had a fumble recovery.

Casey Beiler threw for a career-high 325 yards, finishing 10-of-17 with three touchdowns.

Freshman Lorenzo Sanchez entered the game late, made a tackle on a pass reception, stripped the receiver of the ball and then recovered the fumble. Lawson Carter and Weaver also recovered two of Landrum’s four fumbles.

Not a bad debut for Polk County’s newest set of uniforms, which arrived Friday morning following weeks of delays.

“Those babies are 1-0,” said Polk County head coach Bruce Ollis of the jerseys.

“This is what our football team needed. Last week’s loss (40-26 to West Henderson) was tough on this football team. We went through a lot of adversity over the week, and to come together like this is quite a good feat. It shows me that we’ve got a bunch of tough guys, because we were hard on them this week. We worked them hard and they came out on top and played well.”

Landrum fumbled on its first drive, leading to a short Polk possession ended in Weaver’s 18-yard scoring scamper. The Cardinals then had a golden chance to tie the game early in the second period, recovering a Polk fumble at the Wolverine 14, but Polk immediately forced a Landrum turnover, with Weaver recovering the bobble at the 15.

On Polk’s next play, Simpson ran a pass route toward the outside of the field, veered back inside and pulled away from the Landrum secondary. Beiler hit him in stride and Simpson outran a defender to complete the 85-yard scoring play, with Logan Nodine’s extra point making it 14-0 with 9:55 left in the half.

The Wolverines drove 80 yards to score on their next possession, the highlight a 49-yard Beiler-to-Simpson pass that led to Weaver’s 21-yard scoring run. Simpson then recovered another Landrum fumble at midfield with 2:45 remaining, and Polk drove for another score, Beiler tossing a 5-yard strike to Vincent Twitty with 22 seconds left in the half, putting Polk up 28-0.

Polk continued to pile up big plays in the final two quarters. A Weaver 57-yard run set up Karlen McEntyre’s 4-yard touchdown run. Weaver turned a swing pass into a 71-yard play to set up Beiler’s 20-yard touchdown pass to Simpson, the junior outleaping a Landrum defender in the end zone to catch the lobbed throw. Sanchez’s takeaway set up Weaver’s final carry, a 48-yard touchdown run on a fourth-and-three play with 4:08 remaining.

“It was our goal to establish a running game tonight,” Ollis said. “We had a mission that (Weaver) could go for 200 yards tonight, and that happened. We caught the ball well, too. Tony Simpson made some incredible catches, touchdowns and balls thrown in all places.

“None of these guys had ever played (against Landrum). We had (alumnus and former player) Justin Simpson talk to them before the ball game, and he told them about the tradition of playing Landrum and the tradition of Polk County football. I think that meant a lot.”

Landrum’s lone score came midway through the third period, the Cardinals driving 47 yards in nine plays, with Poore hitting a 13-yard strike to Marc Baker in the back of the end zone.

The win ends Polk County’s non-conference schedule, with the Wolverines set to host Patton next Friday in their Mountain Foothills 7 Conference opener.