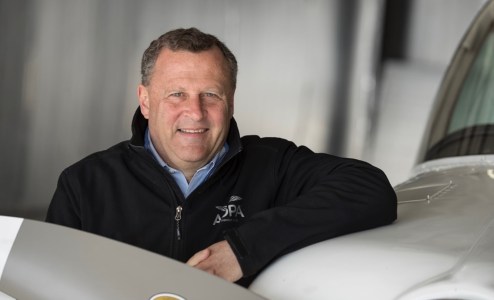 Hedges worked as an advocate for aviation at the Aircraft Owners and Pilots Association (AOPA) for over a decade, serving first as its director of media relations and then in the office of government affairs and advocacy, managing the southern region of the nation. He had a fierce passion for general aviation, reflected in his tireless airport and pilot advocacy work.

“Steve was a fighter and a gentleman with a quiet and determined passion to protect and promote general aviation. While he loved to fly, aviation was second to his love for his wife, Rebecca, and their four children,” said AOPA Senior Vice President of Government Affairs and Advocacy Jim Coon. “Whether it was communicating the importance of general aviation or navigating the halls of state houses and city councils, or meeting with local airport communities and residents, Steve took a collaborative approach to resolve issues, and he did it all with his signature sense of humor and humility.”

After graduating from the University of Iowa in 1982, Hedges landed a job as a reporter at the Greenville News where his reporting caught the eye of editors at the Miami Herald. They brought him on board in 1984. Working out of a bunker-like outpost in Tamarack, one of the Herald’s many bureaus in Broward County, he distinguished himself with a series of stories about John Lomelo, then the mayor of Sunrise, Fla., who was under investigation by the FBI for corruption. Mining a key FBI agent and an FBI informant, Steve produced a series of stories that not only illuminated what the FBI was probing but also uncovered other Lomelo irregularities that had not come to light. Lomelo was convicted and imprisoned in 1985 on federal charges.

In 1988, Hedges got a call from Brian Duffy, who had worked with Hedges at the Herald but had moved on to be the deputy national editor at U.S. News & World Report. Duffy asked Hedges to join the team and he jumped at the chance. Hedges loved international reporting and covered the 1990 Persian Gulf War on Iraq’s border with Turkey and Syria. He traveled to Paris and London to interview diplomats about the war in Bosnia and exposed America’s fecklessness with regard to intervention in that miserable conflict.

During his decade at the magazine, Hedges covered a wide range of national security, domestic, and foreign affairs stories, including reporting from Europe, the Balkans, the Middle East, and South America. He won the prestigious Overseas Press Club Award for a July 1991 cover story that labeled Iraqi Leader Saddam Hussein “The World’s Most Dangerous Man” just one month before Iraq invaded Kuwait, launching the first Gulf War.

Being a private pilot, Hedges’ keenest interest lay in aviation stories, especially investigating airplane accidents. He exposed the flaws in de-icing equipment that led to an American Eagle commuter plane crash in 1994 and investigated the cargo-hold fire that brought down a ValuJet DC-9, killing 110 people, in May 1996. In September of that year, U.S. News published Hedges’ cover story titled “Illegal in Iowa” which exposed an underground railroad of Mexican immigrants imported by meatpacking plants for low-paying and dangerous jobs. The cover is on display in an exhibit on immigration at the National Museum of American History in Washington, D.C.

In 1998 Hedges joined the investigative team at the Chicago Tribune. Working a wide-ranging beat, he exposed the unscrupulous market in human tissue. He was part of a team of reporters that won the Pulitzer Prize in 2001 for coverage of aviation system failures at Chicago’s O’Hare International Airport. He anchored the paper’s coverage of the war in Iraq and covered food policy, exposing numerous food safety, marketing, and agricultural issues. Following the Tribune, Hedges had his own consulting firm and advised the Embassy of Sri Lanka in Washington, D.C. on public policy matters.

A celebration of Hedges’ life will be held on Saturday, October 1, 2022 (service time will be announced at a later date).

In lieu of flowers, the family asks that donations be made to the Preston Robert Tisch Brain Tumor Center at Duke University for brain cancer research or to the AOPA Foundation to support flight training scholarships.