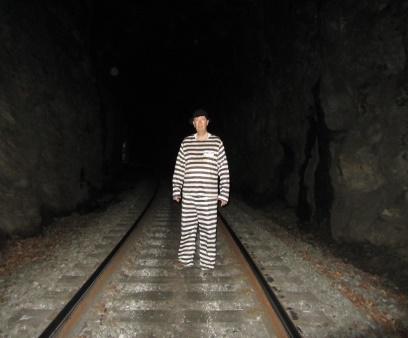 Marion, N.C May Stephen Little has developed a one-man performance illustrating the daily life and experiences of the imprisoned men who hammered their way up Saluda Grade.

Additionally, Steve is an author and railroad historian and has developed a one-man performance illustrating the daily life and experiences of the imprisoned men who hammered their way up Saluda Grade and through the Swannanoa Gap in the late 1800”s.

Residents of Western North Carolina may not be aware that convicted felons played a large role in opening the Blue Ridge Mountains to the rest of the country through their work bringing the railroads into this region. Steve Little recreates the thoughts, words and emotions of the anonymous men tasked with conquering the second oldest mountain range in the world.

In July 2020, Steve co-founded with Dr. Dan Pierce, a history professor at UNC Asheville and a published author, an organization (The RAIL Memorial Project Inc) that has brought recognition to the mostly Black prisoners from the N.C. State Penitentiary who were forced under severe and brutal conditions to construct the Mountain Division of the Western North Carolina Railroad, 1875-1879. On this topic, he was interviewed in 2020 in an Emmy-nominated program by anchor-reporter Tim Boyum of Spectrum News in Raleigh, N.C.

Donning the traditional black and white stripes of the prison laborers, Stephen Little brings his one-man historical interpretation of the “railroad convict” to the Saluda Historic Depot and Museum for the monthly Friday Train Tales on September 16 at 7:00 p.m. Doors open at 6:30, and admission, as always, is free.