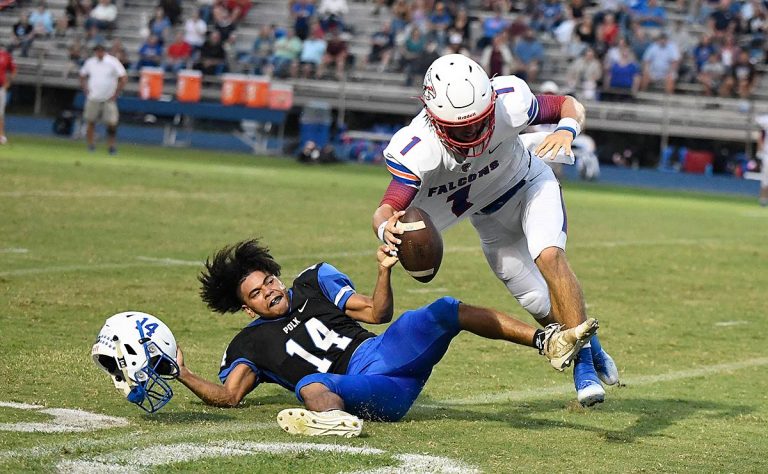 Polk County’s Keaundrae Green soars to knock away a West Henderson pass during the first half of Friday’s game.

“We’ve had running clocks in both games,” someone noted. “This one should be much more exciting.”

A long, warm evening in Tennant Stadium definitely never lacked for excitement, with West Henderson scoring three times in the fourth quarter to rally for a 40-26 victory over Polk County.

The night began on a high for Polk (1-2), which took an early lead and celebrated senior Angus Weaver becoming the school’s career rushing leader on a first-quarter carry. But the undefeated Falcons (3-0) refused to play the accomodating guest as Lucas Kachilo threw four touchdown passes and ran for two more scores to spark West’s win.

Polk scored three touchdowns in a span of four offensive plays to take a 21-7 advanatge in the second quarter, and it appeared the Wolverines might have no problems matching the Falcons’ high-octane offense.

But after that scoring flurry, Polk would only get points from a safety and a field goal, having one other touchdown negated by a penalty and failing to convert a couple of other opportunities. That would eventually doom the Wolverines’ chances in the final 12 minutes.

“We really played so well early,” said Polk County head coach Bruce Ollis. “We were oppotunistic and made some big plays. But we had a couple of scores called back due to penalties and that certainly hurt us. We gave up some big plays on third and fourth downs that wound up biting us a little bit.

“This one hurts more than last week because I felt like we played a lot harder, and I think our players hurt a little more because of it.” 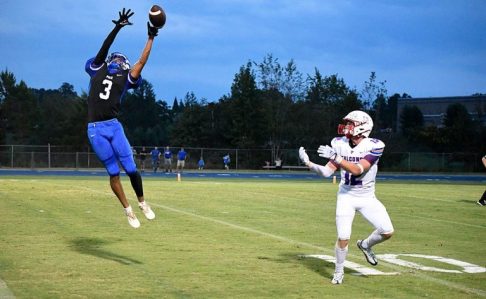 Polk County’s Keaundrae Green soars to knock away a West Henderson pass during the first half of Friday’s game.

Polk got two points on a safety thanks to a bad snap on West’s end. The canceled score left the Wolverines up 23-19 at halftime.

Polk had first-and-goal at the 8 on its first drive of the third quarter, but had to settle for a 20-yard Nodine field goal for what proved to be its final points.

But while the ensuing minutes and result did not prove to be what Polk hoped, say this for the Wolverines – they were in position to win late in the fourth quarter against a larger school that dressed almost twice as many players. With rival Landrum coming to Tennant Stadium next week, that’s something on which Polk can build and point to with pride in the days ahead.

“They call it Labor Day for a reason. You got to show up and go to work and that’s what we’ll do,” Ollis said. “We did a lot of good tonight. Just got to do a little bit more and a little bit better.

‘I hope the fans will hang in there with us. The Wolverines will come back, I’ll assure you.”