Wolverines hope to rebound against Falcons in TV tilt 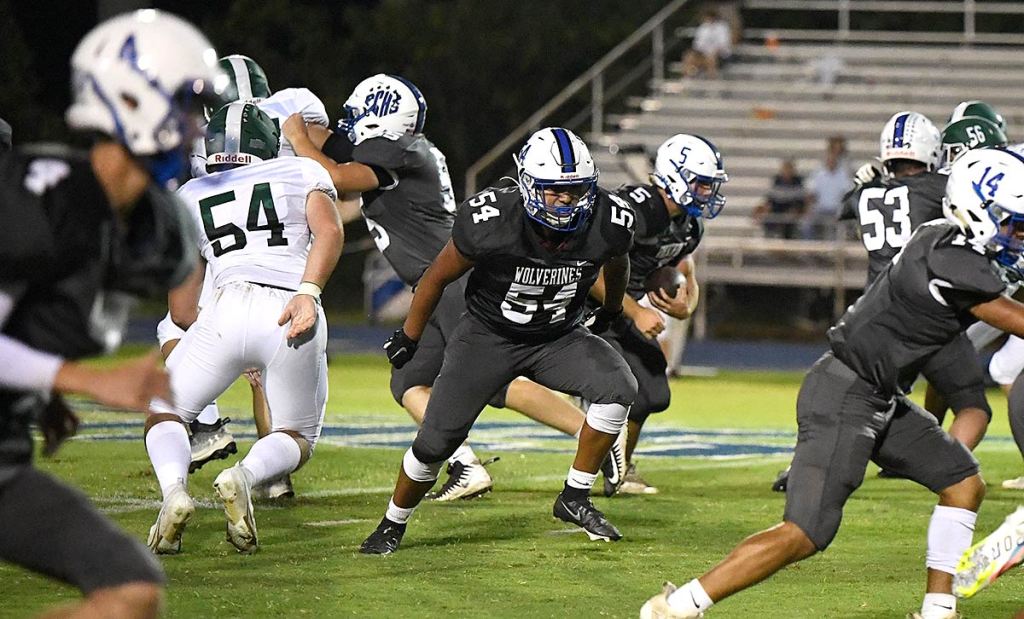 Polk County's Obed Najera (54) is a key part of the Wolverines' offensive line.

“It’s one of those FIDO games,” said Polk County head coach Bruce Ollis. “You rectify the mistakes, but you forget it and drive on. Go on to the next game and don’t perseverate on it.”

That next game offers ample challenge to occupy the Wolverines’ attention. Undefeated West Henderson visits G.M. Tennant Stadium for a 7:30 p.m. kickoff, the game is also being shown live locally on WMYA-TV as well as streamed on NFHS Network.

Polk (1-1) has played several games on WMYA in recent seasons, enough that Ollis isn’t worried about the broadcast serving as a distraction. Nor does he expect Angus Weaver’s pending school record to be a problem; Weaver needs just 13 yards to become the school’s all-time leading rusher, surpassing Jamal Tanner’s record of 3,221 yards.

“There’s more stuff to do leading up to (the TV game), interviews and sending stats and giving depth charts and all these kind of things that we’re prescribed to do,” Ollis said. “But once the game starts, I don’t think anybody thinks about it from a player or coach standpoint.

“My offensive line coach, Dustin Fry, talked about Angus’s situation and the fact that, ‘hey men, we’ve got a chance to have the leading rusher in the history of the school that you blocked for. And some of you guys have blocked for him for three years.’ From Angus’ standpoint, he’s not that worried about it. It doesn’t seem to phase him. I’m certainly sure he’ll be proud of that moment and and we’ll all celebrate just for a minute and then go right back to work.”

West Henderson enters with a high-octane offense that racked up almost 400 total yards in last week’s 34-20 win over Hendersonville. The Falcons have Western North Carolina’s top passer in Lucas Kachilo (32-47, 563 yards, 7 TDs) and top receiver in Truitt Manuel (13-232-3). Junior running back Carson Dimsdale has 266 yards and a score in the first two games.

“Kachilo is averaging about 280 yards a game throwing the football. That’s pretty strong in any league and any level,” Ollis said. “Then they’ve got a running back in Dimsdale who’s averaging 133 yards rushing. I’m not a math major, but that’s over 400 yards offense right there. And then the receiver, Manuel, has caught 13 balls and is averaging 116 yards a game. They’ve kind of got a three-headed monster.

“We’ll have to have an answer for that. Our pass rush will need to improve some, and we’ll have to contain better. We didn’t contain well against Christ School and that hurt us. (Kachilo) is a heady kid. He wants to throw first, but he can also make a little chicken salad and run the football. So we have to be cognizant of that and keep him the pocket and play great coverage in the secondary.”

West Henderson comes in with two victories that have spirits soaring. Polk County returns to Tennant Stadium after last week’s 39-7 setback. The Wolverines will need to rebound to check the Falcons’ momentum.

“They look like a very confident team on film against Hendersonville,” Ollis said of West. “I don’t know how long it’s been since they beat the Bearcats, but that’s a huge win when any of those schools in Henderson County beats Hendersonville. That’s a big deal.

“We went over there last year and it was a very competitive game (Polk won 26-14). COVID kind of got us a little bit, and Angus was our quarterback. They had some guys out, too, and it was a tough, hard-fought game. I expect the same type of game right at our place. One of the great things is that we’re at home again, and I believe this will be their first road game. Getting on the road is a different experience, so hopefully that’ll give us an advantage.”