A foot in the doorway? 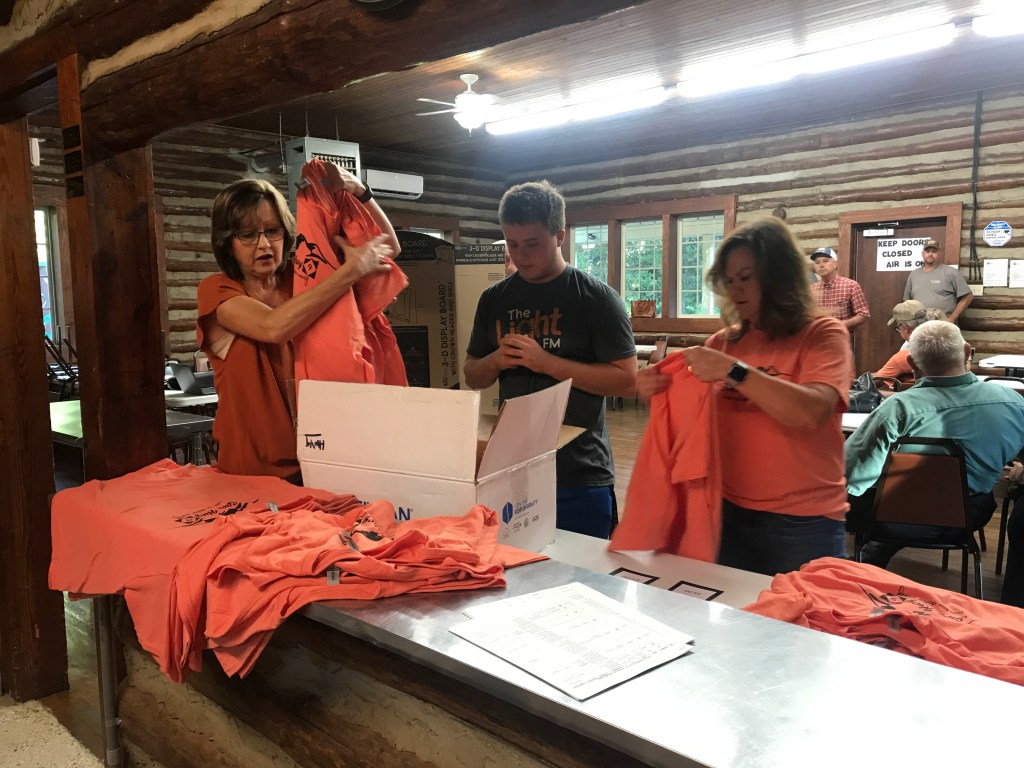 Community members opposed to the state’s plans to widen a 2.7-mile stretch of Hwy. 9 in Polk County say they have more questions than answers about the NCDOT’s reasons for pursuing the $12.2 million project.

In Division 14 Engineer Andrew Buchanan’s presentation to county commissioners on June 20, he stated that the purpose of the widening is to “enhance safety and improve traffic flow.” The 2.7-mile project starts at the NC 108/Hwy. 9 intersection and ends at the Hwy. 9/US 74 intersection. 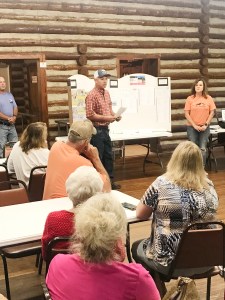 With maps and data obtained from the NCDOT and Foothills Regional Planning Commission on displays behind them, Mitch Pack, left, and Karen Pack, right, spoke on the effects a widened Hwy. 9 would have on a rural community. (Photo by Claire Sachse)

Karen Pack says that she’s heard and read several reasons for the state’s plans to widen the road  – everything from safety, to having 6 feet of recovery lane for people to swerve to pass cars, to including a bike lane as part of an “Overmountain Greenway Bike Trail.”

She wonders whether the Tryon International Equestrian Center’s owners, when they purchased the Lodge on Lake Lure in 2015, might also have had some influence on the decision. And she questions why the project calls for 6-foot-wide shoulders. Other than I-26, she says, there are no other existing roads or planned projects in the county calling for shoulders that wide.

The state has been misleading when citing accidents as a reason for the project, and she can debunk the state’s figures, she says. Between 2012 and 2017, there were 36 accidents with one fatality on that stretch of Hwy. 9, according to state figures she obtained. Nine of the accidents were at the NC 108 and US 74 intersections. Of the other 27 accidents, one fatality occurred in a police pursuit and the other accidents involved animals, left turns, fixed objects and rear ends.

“Taking into account the 3,000 average daily vehicles traveling this section, multiplied by 365 days of the year, this gives you 1,095,000 cars per year. The percentage of a car having an accident on this section, using an average of 6 incidents per year, is 0.0005 percent which seems miniscule,” she says.

Rumble strips were installed in 2016, and she says the state claims they are aiding in crash reduction in western North Carolina by 39-40 percent.

A less expensive and more impactful way to gain safety on this stretch of road, she argues, is for the speed limit to be lowered from 55 to 45, for signs to be reinstalled marking the speed limit, blind spots, hills and turn offs, and for law enforcement to step up their presence.

One by one, Mitch Pack detailed how each property would be affected. In one landowner’s case, the highway will come within 10 feet of his front porch. In another case, the highway will delete a well and septic tank, leaving the homeowner with nowhere to relocate both due to the property’s location in a flood plain. And in many cases, landowners would lose hillsides and slopes, as construction would require cubic feet of dirt removal.

Karen Pack shared a story about a resident who had their property appraised recently. They learned that they will lose $120,000 to $130,000 in property value due to the road’s proposed widened borders.

Many attendees spoke about the stated $12.2 million cost being out of touch with the reality of inflation, availability of construction materials, and high utility relocation costs.

Several residents added their concerns about having a possible bike lane included in the project, saying that when the road is widened, motorists will tend to drive even faster than they do already.

“They can call it a bike lane if they want, but once they pave it, they can do whatever they want,” said Phillip McAbee. “Put a center lane in. Put two lanes on the outside. Or make it four lanes. I think they’re trying to soft pedal a four-lane road.”

Ray Gasperson, whose property is on Hwy. 9 in Green Creek, said the state is looking 20 years ahead with this project. “Are they buying enough right of way so that when the day comes when they do make a four-lane road, they’ve got it? It’s there. It’s obvious,” he said.

He added that he recommends the board of commissioners pass a resolution opposing the project, much like they did when Duke Energy proposed building transmission lines through the county in 2015. Henderson and Buncombe counties followed Polk’s lead in passing similar resolutions, and ultimately the project was halted.

“Our little section is just a foot in the doorway,” said Karen Pack, motioning to the table displaying maps of the Foothills Regional Comprehensive Transportation Plan and a working list of NCDOT’s projects for Polk County, “because it’s planned to go all the way to the South Carolina state line and all the way to the Rutherford County line on [Hwy.] 9.”

McAbee invited audience members to come to two upcoming meetings to demonstrate their opposition to the project. The first is the Polk County Commissioner meeting, Tuesday, September 6 at 5 p.m. in the Womack Building in Columbus. The second is a forum sponsored by NCDOT to be held Thursday, September 22, 5-7 p.m. at Polk Central Elementary School.

Orange T-shirts will be available for purchase for $8 and $10, and attendees are asked to wear them to show support, or to hold orange signs.

“We need numbers [to show up],” McAbee said, to demonstrate to commissioners and NCDOT that the opposition is large.

An online petition at Change.org called “Stop the Hwy 9 Widening Project” has 961 signatures as of press time. Additionally, there is a petition circulating that will be sent to Governor Roy Cooper. To request a copy, contact Karen Pack at ktpack@windstream.net.

“This is a fight for everybody in the county,” said Karen Pack, “whether you’re a resident along any part of Hwy. 9, or as county taxpayers, or as someone who drives on Hwy. 9.”