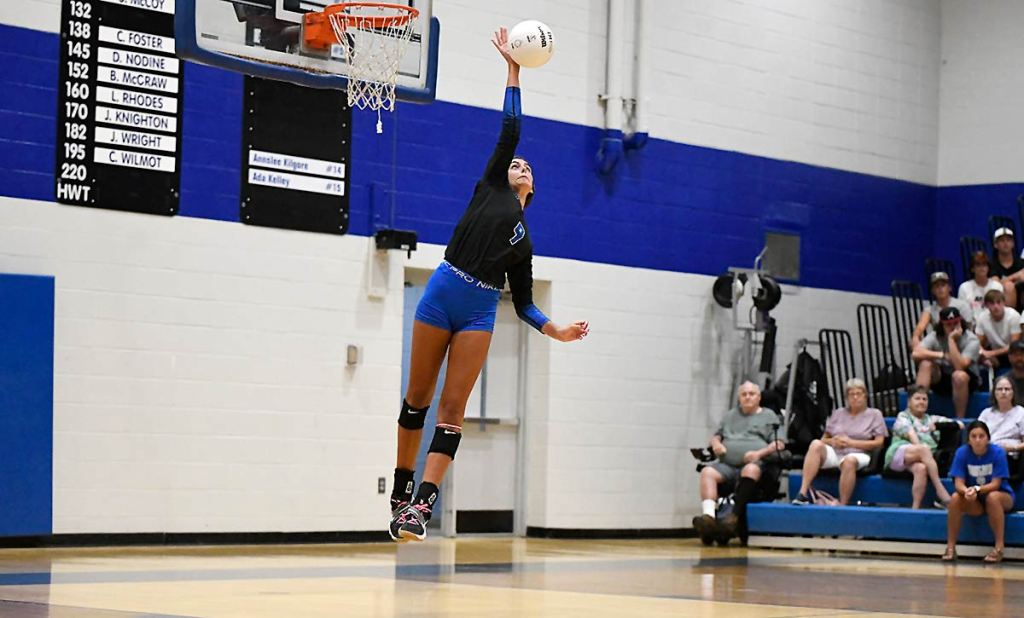 It’s just one of 12 conference games, and the Mountain Foothills 7 Conference isn’t exactly a league full of pushovers.

That said, Polk County’s league debut Tuesday delivered a message that the Wolverines are likely going to be a factor in the conference race.

An outstanding defensive effort helped fuel the Wolverines’ 25-12, 25-14, 25-17 victory over previously undefeated Patton in the MF7 opener for both squads at Polk.

Polk County (7-1, 1-0) set the tone for the match from the first point – an emphatic Morgan Yoder kill. But it was defensively where the Wolverines were at their most energetic, blocking several early Patton attacks and digging those that did slip through.

Polk opened a 10-5 lead, then moved to 15-7 on two Ada Kelley kills and two Yoder blocks. The Wolverines closed the set with another 10-5 spurt, with Sophia Overholt and Elena Carroll delivering successive kills to close the set.

The Wolverines reeled off seven straight points early in the second set, that run including a pair of blocks and another big Yoder kill, to take a 10-4 advantage. A 7-2 run that included kills by Overholt and Mia Bradley pushed the lead to 20-10, and the Wolverines closed the set on a long point that included three digs by Yoder, indicative of just how well Polk played defense throughout the evening.

“We played well,” said Polk County head coach Molly Hill. “There are obviously little things like tips over and other things on defense that we’ve got to work on, but we blocked well. We’re big at the net, so that’s a plus.

“Then I thought, in return, that when we did get those balls up and those tips up, we played really strong in our hitting game and at the net.”

A knee injury to setter Zaelea Eller seemed to slow Polk’s enthusiasm a bit in the third set as the two teams largely swapped points for some time. The Wolverines began to gain some life late, especially with Eller returning to the court, and steadily pulled away, ending the match on an Amberlyn Scruggs ace, a Yoder kill and another Scruggs ace.

“I feel like our energy was up and down tonight,” Hill said. “Zaelea hurt her knee and we didn’t know what was going on. Mia really stepped up in that second set.”

There’s little rest for the weary – Polk County will travel Thursday to Hendersonville to face a Bearcat squad that defeated R-S Central on Tuesday.

“I told them before the game that this is how we’re going to jump-start conference. We’ve got to get it done and I thought they did that,” Hill said. “I keep telling them that these are the games that are exciting and are going to make us better.

“Now we’ve got to get ready for Thursday.”