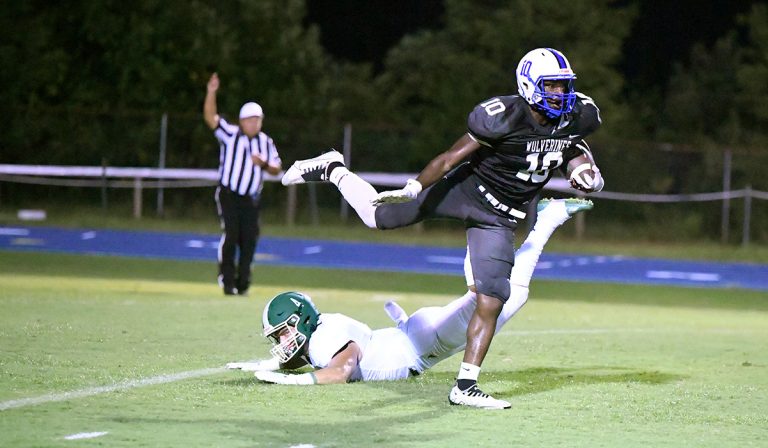 The Christ School quarterback threw for three touchdowns and ran for another Friday as the Greenies spoiled Polk County’s home opener, handing the Wolverines a 39-7 setback in G.M. Tennant Stadium.

Inclement weather in the area pushed the kickoff to almost 8:30 p.m., but the delay didn’t seem to affect Mauney, the former East Rutherford standout. He threw for 156 yards and rushed for 114, including a 70-yard ramble in the first period for the game’s opening score.

Christ School (1-1) added two more touchdowns in the second period to take a 20-0 lead at the half, then scored twice more in the opening five minutes of the third period for a 33-0 advantage.

The private school Greenies looked markedly improved from last week’s 10-6 loss to Charlotte Latin. Yet Polk County (1-1) had its chances early, moving inside the Greenie 40 on each of its first three possessions. One of those ended in a near-miss on a pass into the end zone, the others on downs and a punt. A score on any of those drives might have led to the evening unfolding in a different manner.

“We had some opportunties early on offense to punch the ball in,” said Polk County head coach Bruce Ollis. “We missed a few tackles defensively in the secondary and the quarterback has a big run.

“We got outplayed a little bit, and that happens in football. And we challenged our players after the game to come back Monday and let’s get better. That includes the coaches.” 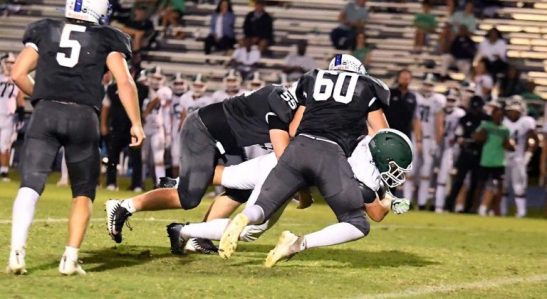 Polk finally got on the scoreboard in the third period with its best drive of the night, an eight-play, 65-yard effort that ended with Karlen McEntyre’s 4-yard scoring run. The Wolverines were largely stymied much of the evening, though, by Christ School’s defensive front, which repeatedly harassed quarterback Casey Beiler and helped hold the Wolverines to 129 total yards.

“A learning experience for all of us,” Ollis said. “We lost to a good football team tonight and we’ll certainly bounce back.

“The touchdown that we scored near the end was against their first-team defense. We looked like the football team that we looked like last Friday. We just didn’t do it but that one time.”

A bad snap on Polk’s opening play of the third period gave the Greenies the ball at the Wolverine 14, and Mauney’s 13-yard scramble set up a Brown 1-yard scoring plunge. Conley then snared a 30-yard touchdown reception to give Christ School a 33-0 lead with 6:58 left in the third period.

Mauney followed McEntyre’s score with a 9-yard toss to Conley to complete the scoring.

Polk County’s Angus Weaver finished with 128 yards rushing on 20 carries to pace the Wolverine attack. Mauney ran for 114 yards on five carries and Conley had 100 yards receiving on five receptions for Christ School.

The Wolverines continue their four-game homestand next Friday, hosting West Henderson in a game that will be shown live locally on WMYA-TV.