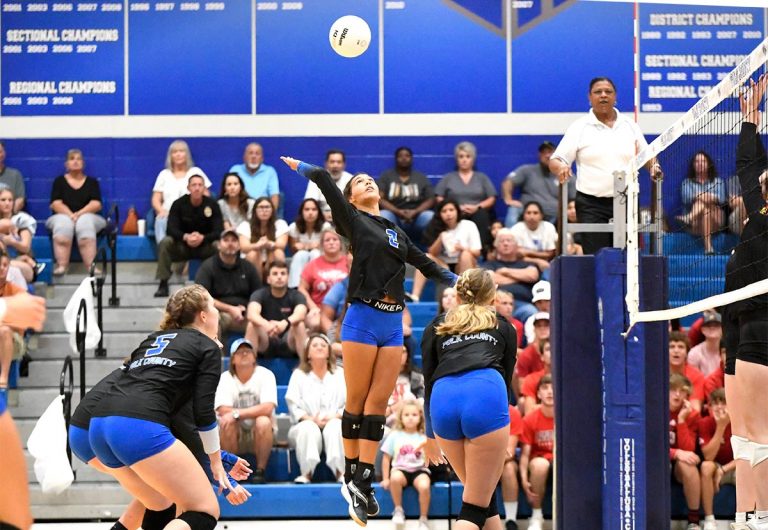 Polk County couldn’t have asked for a better week to prepare for the start of its conference schedule.

Nor a better way to end it.

The Wolverines romped Thursday to a straight-set win over Landrum, sweeping the Cardinals before a enthusiastic home crowd in the first meeting between the Thermal Belt rivals since 2017.

“Big week,” said Polk County head coach Molly Hill. “We had three big games, and I told them that all of those schools are much bigger than you and those are huge wins. I told them, you’re there, your skill level is there.

As they’ve done all week, the Wolverines attacked well and also blunted much of Landrum’s offense. The third set proved the tightest of the night, with the Cardinals rallying from an early deficit and grabbing an 18-17 lead.

The Wolverines evened the score, then took a 19-18 lead on a Morgan Yoder kill, part of a run of seven straight Polk points that moved Polk to match point. A serving error gave Landrum a brief respite, but Sophia Overholt’s kill on the next point ended proceedings.

Yoder and Overholt each had 10 kills, with Elena Carroll adding four. Amberlyn Scruggs and Zaelea Eller each finished with 13 assists.

Polk travels Monday to A.C. Reynolds before returning home Tuesday to face Patton in the Mountain Foothills 7 Conference opener for both schools. The Panthers will enter with a 5-0 mark.

Hill hopes Polk’s strong early-season play will provide a boost entering what should be a very competitive conference schedule.

“Last year, with us being so young, we started off playing these bigger schools and we weren’t getting wins,” Hill said. “I tried to take those losses and make them into a learning situation for us.

“So I’m grateful for this year for there being more wins and more positives. It’s boosting their confidence, and I hope we can continue that.”