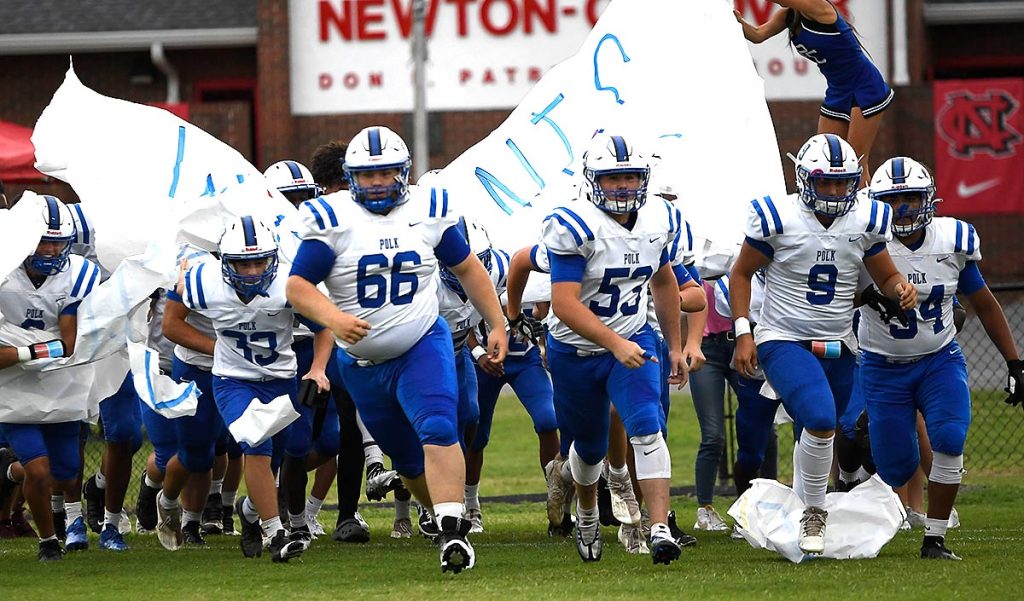 The private school Greenies will visit Polk County for the first time since 1989 on Friday, serving as the Wolverines’ opponent for their home opener in a 7:30 p.m. kickoff in G.M. Tennant Stadium. The game will also be shown live on NFHS Network.

The opener should be a good on-field test for a Polk County squad coming off a 42-28 victory at Newton-Conover. The Greenies dropped a 10-6 decision to Charlotte Latin last week in their home and season opener.

It will also be an experience perhaps only similar in recent years to Polk’s 2018 encounter with National Christian Academy in terms of facing a team able to bring in players from a wide geographic area.

“I told our players it’s a cultural event, to a certain degree,” said Polk County head coach Bruce Ollis. “We’re excited about playing a team like Christ School. They’ve got a great program and great tradition. I think they’ve been playing football there for about 100 years.

“It’s going to be a big challenge for us.”

Wide receiver/defensive back Zach Myers has committed to North Carolina State. Linebacker Cayden Jones has been ranked one of the top juniors in the nation by ESPN and has numerous Division I offers. Defensive end Eythan Serrano was ranked last season as one of the top linemen in Texas.

The Greenies also feature a couple of local standouts – senior quarterback Tray Mauney played at East Rutherford and threw for more than 250 yards in a 2019 loss to Polk County while receiver/defensive back Khalil Conley moved from Asheville High prior to this season and reclassified into the Class of 2024.

“They spread the field and throw the ball,” Ollis said. “We’ve got to press the quarterback some. He’s a big, tall, strong kid. They’ll also slide (Conley) in back there. He’s their running quarterback, but he can throw the ball, too. He does a great job for them at free safety and at receiver.

“They do have vertical speed. They’re not quite as big up front as Newton-Conover, but they’re more athletic. We’ll have to deal with that athleticism.”

“(Harrison and Jones) are very talented players. They just run,” Ollis said. “They’re very instinctive and they don’t stay blocked, which is what you’ve got to do to be a pretty good defensive player.”

Polk will look to continue some of the offensive success it had last week with a ground game that racked up 104 yards on 28 carries and a passing attack that accounted for 167 yards and four touchdowns. Antonio Simpson caught eight passes for 133 yards and a score and also had 10 tackles and two sacks on defense.

“Tony Simpson had a great game,” Ollis said. “I told Tony that as a result, you’re going to receive a lot of extra attention. Because of that, other people will be open, and that’s a tribute to you.”

Ollis hopes to see Tennant Stadium packed with Polk fans as the Wolverines begin a four-game homestand. The 1989 encounter with Christ School marks the only time the Greenies have played in Polk County, with the teams’ rematch in 1990 the last meeting in the series.

“It’s great to be home,” said Ollis, as Polk has played its last five games on the road dating back to last season. “We’re hoping we get a big crowd. . . and get all the old Wolverine fans to show up and be part of what we’re doing.”