Are warbles driving your squirrels nuts? 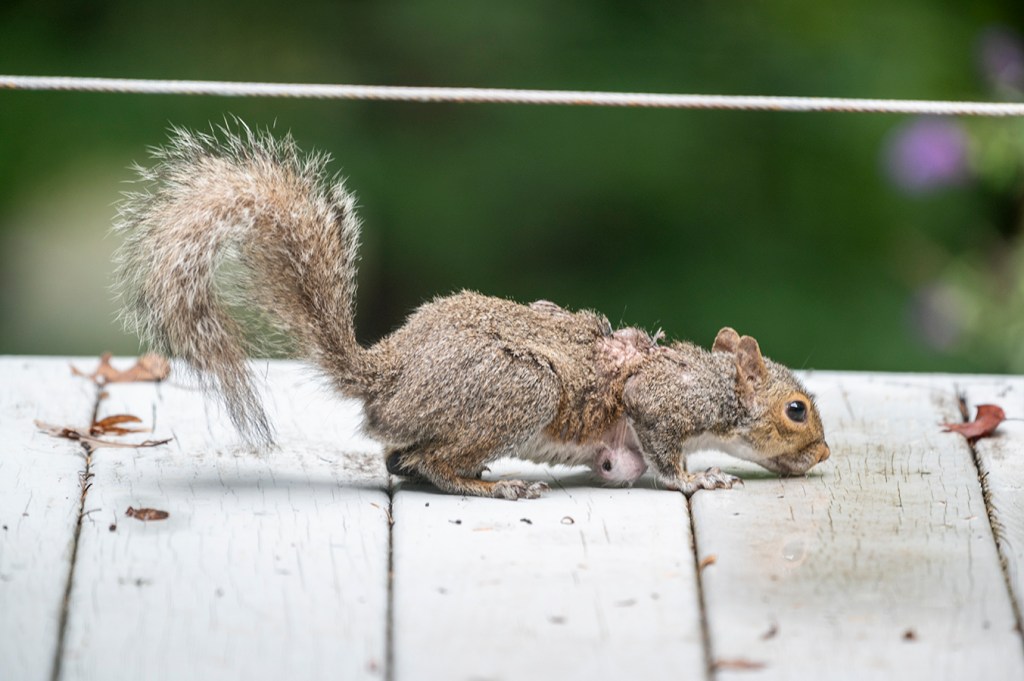 A squirrel with a case of the “warbles” or “wolves” goes about its business despite playing host to bot fly larvae that can burrow under and infect the skin of the squirrel this time of year. (Photo by Terry Brown / Tryon Daily Bulletin)

FOOTHILLS – If your squirrels are looking a bit nightmarish these days, they could just be suffering a bad case of the warbles. Also known as “wolves” the heinous, cancerous-looking lumps can transform a sweet and innocent-looking squirrel into something fresh out of a horror movie.

Squirrels with the freakish-looking lumps are actually playing host to the larvae of the bot fly, Cuterebra emasculator Fitch. The bot fly will lay its eggs where squirrels are known to travel. When the eggs hatch in late summer and early fall, the small larvae hop a ride on the unsuspecting squirrel and burrow underneath the skin where it will remain for three-to-four weeks feasting on fluids – but not the blood – from the squirrel’s body. As it does so, large lumps will form, usually around the squirrel’s arms, shoulders, and back.

When the larvae mature, the lumps form holes from which they will emerge and fall to the ground where they will winter beneath the surface of the ground in its pupal stage and emerge as an adult bot fly in the spring. As hideous as the squirrel looks while being preyed upon by the bot fly larvae, they are rarely affected by their guests and return to normal-looking squirrels once the metamorphosis has subsided, said Andrea Shipley, a mammalogist with the North Carolina Wildlife Resources Commission.

“Bot fly growths are normal and like any external parasite, bot fly populations can go through a boom or bust and if you’re seeing many squirrels with bot fly growths it’s likely that they’re having a local boom,” said Shipley. “Our statewide squirrel populations are healthy and stable, so a localized bot fly boom and increased infection rate will not impact the statewide population.”

And while squirrels may be the most recognizable hosts in these parts, the bot fly is also known to prey on chipmunks, rabbits and other rodents, as well. With these animals populating areas that often have both human and pet traffic in proximity, of course, a concern would be whether or not this is transmissible to humans and/or pets.

“The tree squirrel bot fly is not transmissible to humans or pets, it’s specific to tree squirrel species in North America,” said Shipley.

“There is a human botfly that occurs in Central and South America but thankfully we don’t have that problem here,” said Ayolane Halusky, a naturalist and owner of Earth Kinship, an ecotourism company specializing in nature education and unique outdoor adventures. Halusky cautioned that pets who might have an open wound could still be susceptible, though rare, if they came into contact with the parasite.

The good news, said Halusky, is by the end of October, the bot fly infestations will have completed their cycle and the squirrels will return to their normal cute selves where they’ll be in full swing with their annual nut gathering and preparations for winter.