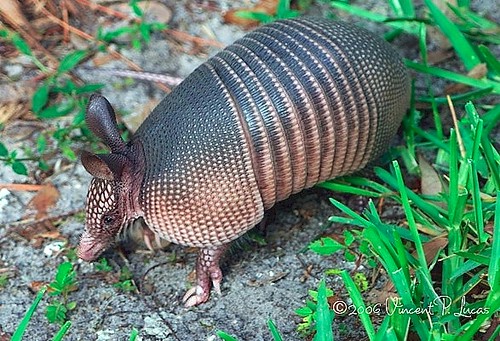 Nine-banded Armadillo (Photo by leppyone, licensed under CC BY 2.0.)

Are armadillos found in WNC? Sure enough! The Nine-banded Armadillo (Dasypus novemcinctus), a unique mammal native to Central and South America, first appeared in North Carolina in the late 2000s and has been seen more frequently in the region over the past few years.

Of the 20 species of armadillo throughout the Americas, the Nine-banded Armadillo is the only species found in the southeastern United States. Armadillos are the only mammal that has a shell, which is made of hardened skin plates. In Spanish, armadillo means “little armored ones.”  The Nine-banded Armadillo’s name is derived from the 7-11 bands across their midsection. They have a scaly tail, long deer-like ears, and a long pig-like snout. They were first recorded in Texas in 1849.

The Nine-banded Armadillo is a solitary animal that has adapted to many habitats including scrubland, grasslands, pine forests, salt marshes, and deciduous forests. Their habitat needs are dependent on precipitation levels and winter temperatures, and because they make burrows, armadillos prefer clay or sandy soils. They are mainly nocturnal and have poor vision but a great sense of smell. Once they sniff out their prey of grubs, insects, and other invertebrates, they capture them using their long, sticky, and flexible tongue.

The Nine-banded Armadillo has numerous natural predators including feral hogs, dogs, black bears, coyotes, bobcats, and raccoons, and their nocturnal habits of feeding on invertebrates make them susceptible to being struck by motor vehicles at night.  If approached, an armadillo protects itself by running through thick brush. They can defend themselves by releasing a foul-smelling spray, and when frightened, they can jump straight up several feet! The Nine-banded Armadillo can climb fences, but they are not known to climb trees. They can also swim, and they have been known to walk on the bottom of a lake while holding their breath!

The North Carolina Wildlife Commission is interested in knowing about your observations of the Nine-banded Armadillo. If you believe you have seen an armadillo, please contact the NC Wildlife Helpline at 866-318-2401 or e-mail wildlifehelpline@ncwildlife.org.

Conserving Carolina, your local land trust, is dedicated to protecting and stewarding land and water resources vital to our natural heritage and quality of life and to fostering appreciation and understanding of the natural world. For more info visit, www.conservingcarolina.org.