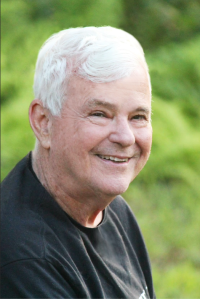 Columbus– Gilbert Whitney Bourgeois, 82, of Columbus, NC, died on August 18, 2022, with family at his side. Born February 16, 1940, in Baton Rouge, Louisiana, he proudly called that area home for most of his life. In 2016, he moved to North Carolina to be closer to family.  Whitney graduated from Catholic High in 1958 and from LSU with an Undergraduate and a master’s degree in Forestry. He also served as a First Lieutenant in the US Army while stationed at Fort Sill, Oklahoma. His professional life was spent at a paper mill in Saint Francisville, Louisiana where he worked for 30 years. Subsequently, he started his own landscaping business and provided expert lawn care for his clients. A true Louisianan sportsman, he loved to hunt and fish in his leisure time.
Whitney was preceded in death by his parents, Wilford Benedict Williams Bourgeois and Valerie E. Bourgeois, and his sister Barbara Cecile Hart. He is survived by his son and daughter-in-law, Bret Whitney Bourgeois and Stacey Bourgeois of Saluda, North Carolina; daughter and son-in-law, Danielle Bourgeois Weber and Brian Weber of College Grove, Tennessee; daughter Kelly Bourgeois of College Grove, Tennessee; three grandchildren, Andrew and Nicholas Weber, both of College Grove, Tennessee, and Jacques Whitney Bourgeois of Saluda, North Carolina.
The funeral Mass will be celebrated by Father Jason Christian on Saturday, August 27, at 11:00 AM at St. John the Baptist Catholic Church, Tryon, North Carolina (with a preceding Rosary to be prayed at 10:30 a.m.). Interment will take place in Greenoaks Cemetery, Baton Rouge, Louisiana on a future date to be announced. The family kindly requests flowers be reserved for the Baton Rouge burial.