“No Boiling Springs in Mill Spring” 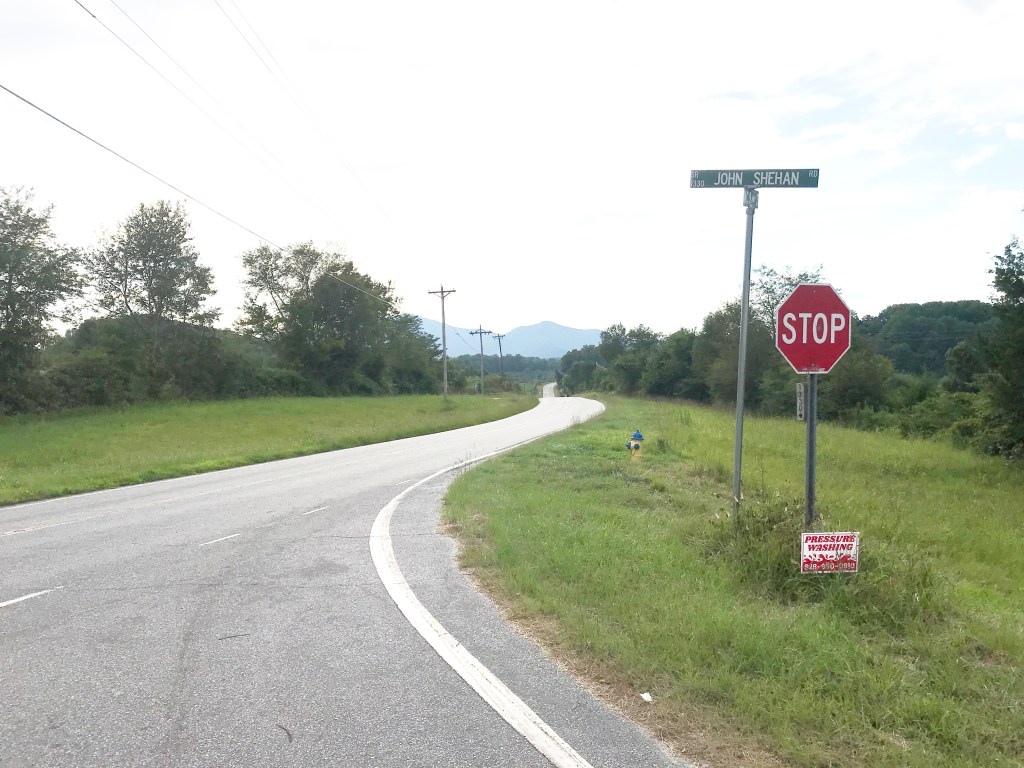 A view of Hwy. 9 north towards Mill Spring.

Monday’s county commission meeting was dominated by discussion of the state’s plans for the widening of Hwy. 9, with commissioners and Hwy. 9 property owners unanimously voicing concerns, questions, and opposition.

Polk County Commissioners met August 15 and heard from a dozen property owners whose land will be affected by the road’s widening. Chairman Tommy Melton said he had visited with several landowners at their properties prior to Monday’s commission meeting and heard frustration about how the road widening will impact their homes negatively and usher in unwanted change on a rural stretch of road.

In June, Andrew Buchanan, assistant division proposal engineer with NCDOT, presented details of the $12.2 million road widening plan to commissioners. The plan for the 2.7-mile portion of Hwy. 9, from NC 108 to US 74, calls for widening both travel lanes from 10 feet to 12 feet, and adding 6-foot-wide paved shoulders, 12-inch rumble strips, and turn lanes at Polk Central Elementary School.

Right of way acquisition began in July. Utility relocation is slated to begin in October 2023, and construction will begin in fall of 2024.

At that June 20 meeting, Buchanan said that the NCDOT would schedule a public meeting to address residents’ questions and concerns. That meeting has been scheduled for Thursday, Sept. 22 at Polk Central Elementary School from 5-7 p.m.

Phillip McAbee says he is the fifth generation to live on his property on Hwy. 9, and by his count there are 48 landowners along that 2.7 mile stretch of road. Polk’s property records show that in many cases extended families live beside each other, with familiar names like Pack, Walker, Hyder, McAbee, Ruff, Waldrop and Moss, to name a few.

“The DOT took a bite they couldn’t swallow when they tried to widen Hwy. 108,” McAbee said, referencing the state’s attempt to three-lane Hwy. 108 between Tryon and Columbus which was defeated in 2018. “Three thousand property owners fought it. It concerns me when I hear that it is on us, that we’re the only ones that can stop it, because there’s only 48 of us.”

Former Polk commissioner Ray Gasperson also voiced strong opposition. A property owner with Hwy. 9 frontage in Green Creek, outside the scope of this project, Gasperson said that if the DOT does this project, “it will prove to be the template for what happens going south to the state line and going north up to Lake Lure.”

“I can guarantee that is what is going to happen.” He also suggested commissioners take a “strong step” by passing a resolution in opposition.

McAbee also asked that residents north of the Hwy. 108/Hwy. 9 crossroads, and south of the US  74/Hwy. 9 intersection consider joining the 48 landowners in their resistance to the state’s plans and show up at the meeting on Sept. 22.

Mitch Pack said that this project is just a start. “If they get their foot in the door on this, their idea is to take it all the way to Lake Lure. That’s the way this is going.”

He added, “We don’t want a Boiling Springs in Mill Spring.”

What is wide enough?

Most of the speakers expressed that a 2-foot widening was acceptable, but did not see a reason to widen the road further.

“I can understand possibly 2 feet,” said Melton, “but I can’t understand 6 feet, 8 feet, 12 feet. I cannot understand that … I don’t know any member of this board of commissioners that understands that.”

Commissioner Myron Yoder said that he is not for a 6-foot shoulder. He was contacted by a business owner who said that the project would take out part of his parking lot.

Cindy Van Wyk said she called the DOT and asked for the purpose of the 6-foot shoulder, and they were unable to provide an answer. Amy Ruff said she was alright with a 2-foot shoulder but any more than that and the project would take out her well and septic tank.

“The Mosses,” McAbee said, “they can’t even plant a flower in their front yard because the [survey] stake is leaning against their house.”

Many speakers questioned the state’s reasons for pursuing the project in the first place and the necessity for spending $12.2 million on an unwanted project when there are other more urgent road improvements that could be made elsewhere in the county.

Pack asked how this project is feasible at a time of high inflation, high fuel costs, and the high cost of construction materials like gravel. Citing a looming recession, he said “this doesn’t seem a logical or practical way to spend money in Polk County. There are other projects that need work.”

Joan Waldrop said the DOT “won’t clean up the roads that need it,” and “they should put money into fixing the roads instead of taking people’s land away from them.”

Pack said that one of the state’s given reasons for the widening was to enhance safety. He suggested that the speed limit be dropped from 55 to 45 mph. Commissioner Melton agreed that 55 mph is too fast, and he would look into lowering the speed limit.

Tony Dale, a 26-year resident, said, “follow the money and watch how incrementalism works to effect these changes in communities. You see it all over the place. I can promise you there are big bucks going into someone’s pockets right now who have plans. You open this up and get enough traffic going through, you can open up all kinds of larger businesses. I don’t think that’s what we want here.”

Commissioner Melton stated that he has a meeting planned with Rep. Jake Johnson on Aug. 25 to take him to meet with landowners on Hwy. 9. Johnson, he said, is going to talk to the DOT and “try and do everything he can to minimize this.” Citizens wishing to have Johnson and Melton meet with them on Aug. 25 are asked to contact Melton at the county office.

In looking forward to the Sept. 22 meeting with NCDOT, Commissioner Overholt said that “we need energy from everyone that lives on Hwy. 9, not just that section.”

Commissioner Beiler said, “It’s going to take a whole lot more people than are in this room to stop it. Talk to your neighbors, your sister, your brother, aunt, people you go to church with. Bring people that are concerned about this community out to that meeting. The outcry from the citizens is the only thing that gets Raleigh’s attention. We need to pack that room. Anyone that cares about this community needs to be out there that evening.”

Amanda Pack McCallister has started a petition on Change.org called “Stop the Hwy 9 Widening Project,” and as of press time had collected over 400 signatures.

“With this proposal many people stand to lose yards, pasture land, and possibly their entire homes. On all of the landowners’ properties, fences, water lines, and powerlines will have to be moved and natural habitats will be disturbed. This is also a major safety issue, as many homes will have to endure not being able to use their yards as the highway will quite literally be at their front door. This project will also greatly devalue property,” McCallister writes.