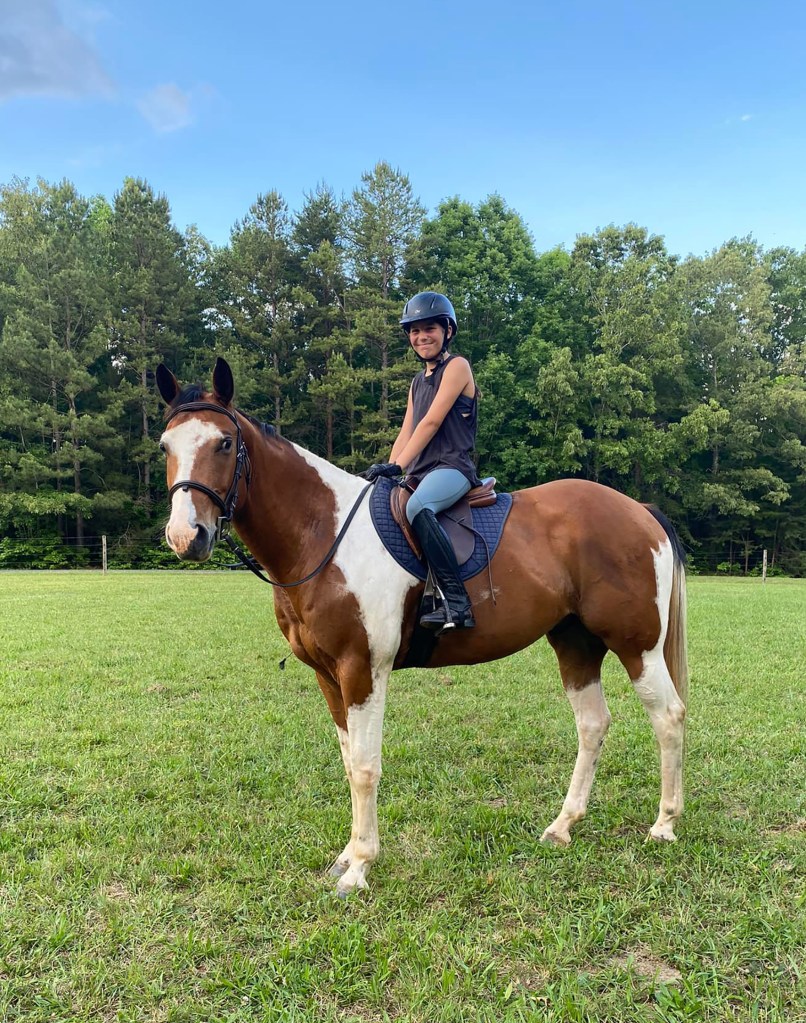 Paige Bassett, trying Morgan, to see if he is her perfect match.

One of the first colts saved by HERD, Daniel Morgan, we named after the famous American Revolutionary War hero who fought on January 17, 1781, near the town of Cowpens, South Carolina. The battle was a turning point in history for the American Revolution. Today in the heart of downtown Spartanburg, on Morgan Square, one can visit a bronze masterpiece of Daniel Morgan. The statue was erected in 1881. The renowned sculptor John Quincy Adams Ward created it. The monument commemorates his valor and victory at the Battle of Cowpens. Morgan was one of the most respected battlefield tacticians of the American Revolutionary War of 1775–1783.

It is a quirky connection, but a HERD Board member, Elaine Freeman, assisted in raising the funds needed to restore the bronze statue. This good deed has enabled Daniel Morgan, adorned in backcountry buckskin and commanding sword, to gaze over the square for more generations of historians to enjoy.

Our equine Daniel Morgan had clever tactics of his own as well. At the tender age of six months old, in March 2016, he found himself separated from his mother. He was sold to the highest bidder at an auction in Vale, NC, and came into a crowded, dirty cattle yard in Green Creek. The buyer had discovered a new business while the cow market was soft. He was acquiring cheaply priced horses, or those listed as free to a good home, in the local newspapers. Once he built a load of 50 to 60 horses, he shipped them in livestock trailers to Oklahoma. From there, they were transported to a terrible fate in Mexico. Any equine age six months and older is fair game to go to slaughter across the border.

Young Morgan was easy to spot in the livestock yard as he was wearing a tight orange woven halter. He had wisely befriended a black and white spotted saddle horse in the same pen. She kept the larger bullies away from him. With her mothering nature, it was clear to us she had recently weaned a foal of her own. Her milk bag was still present.

My mistress, Heather Freeman, was at the lot to pick up a severely injured paint gelding we later named Cherokee when she spied Morgan and his protector. She inquired about the price for both the tobiano paint colt, Morgan, and the spotted saddle mare. Heather promised to be back with her horse trailer and funds to buy them later in the afternoon.

The mare came to be known as Lois Lane, as she joined our first HERD rescue horse, Superman, after quarantine. Morgan would in turn grow up just down the lane at Kim and Christen Oliver’s Edge Brewing Rescue Barn. The use of this facility was donated to HERD, to provide new incoming equines with a place to grow up and receive training.

Morgan enjoyed his adolescence with other youngsters at the Edge Barn, including the flashy palomino, Oro, and the black Arabian cross colt, Stanley. Both were a bit older and left HERD ahead of Morgan to become consistent winners at horse shows and dressage events. 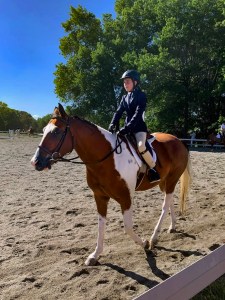 Paige Bassett and Morgan have a clear connection

Make no mistake about Morgan’s talents. He is a smart horse, no question about it. He has a way of looking right through you if you are not being honest with him. He accepts your undivided attention when you are within his inner circle. He is athletic, capable, and brave. He also needs a rider who can keep him busy as he enjoys new challenges.

Once Morgan had two plus years of groundwork under his girth and was backed to ride, a local family adopted him.  He found himself in the ribbons alos, like his former stable mates. He exceled at hunter’s paces. However, his owner decided she needed a horse with more experience for young children to enjoy. Morgan returned to HERD.

Next, the handsome young paint gelding tried his hooves at fox hunting. Jenny Lamb, who was responsible for the fox hunters where Morgan went to live in Athena, Georgia, loved him. However, he was too forward a horse on the hunt field for the novice riders at the barn she managed. They leased mounts for the hunting season and did not ride year-round. So once again, Morgan returned to us. A woman located near Charlotte thought he might be a good dressage mount for her. She took lessons with her trainer on Morgan; his movement was excellent, but alas, he was not her ideal horse.

Morgan was a bit too clever. He has a very distinctive, big personality. He is an in-your-pocket kind of horse, and still a playful youngster at heart. 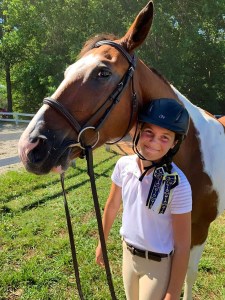 Paige Bassett at her first competition with Morgan

What Morgan needed was a young rider who was as bold,  clever and game-on for new challenges. This was clearly what the young horse enjoyed. Foster trainer Beth Harrill agreed to take the handsome gelding back under her wing. She took him to an eventing weekend, and he was brave and performed well at every obstacle on the cross-country course, in the dressage ring, and at the stadium jumping effort.

She asked herself if she should hold on to him and compete him for a while since  he is so talented.  A young horse, with enormous talent and a good mind, Morgan is easy to manage if his rider focuses on him. When one demands his presence and asks for an exceptional performance, the rider must give him undivided attention.

Then, a wonderful turn of events happened in June. The Bassett family in Summerfield, SC, was looking for a quality eventing prospect for their daughter Paige. Morgan had the looks, ability, and gusto to be a worthy match for their talented young equestrian. The two new partners had an instant connection.

We all have our hooves and legs crossed that savvy Morgan has finally found his perfect match. May Morgan be Paige’s southern hero for years to come, as they stride their way to the championships. 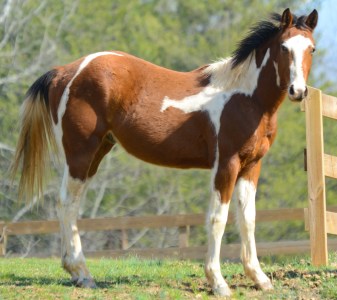 Morgan growing up in HERD