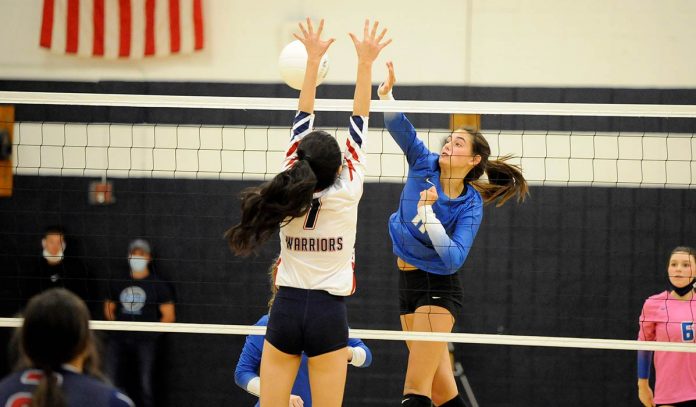 Take a look at the 2022 roster for Polk County’s volleyball squad and you’ll be forgiven for thinking it’s an outdated copy. This year’s Wolverines, who begin their regular season Tuesday at East Henderson, are almost an exact mirror of last year’s squad, with only two seniors lost to graduation.

Experience abounds, and Hill hopes that familiarity can breed a drive toward the top of the Mountain Foothills 7 Conference and a rebound from last season’s 11-14 record, the first sub-.500 mark of her coaching tenure at Polk.

“Last year we were so young, we had so many freshman starters and lots of freshmen and sophomores on the court at one time.” Hill said. “This year, they’re more used to each other. They’ve established that player and teammate relationship. And I think it will just be better, going into it with more confidence.”

Hill talks often about her young players building confidence, and she’s hoping the experience of last year can fuel that. There is little question about the talent level on the roster – Polk County recently earned a three-set split with perennial area power West Henderson in its preseason scrimmage.

The talent and experience is also beginning to show on the court this preseason in practice as Hill has been able to install more sophisticated attacks and run those at a higher pace.

“We’re only two weeks in, and already in practice, we’re working on faster offense things, more high-tech plays, just being more comfortable with what we know we can do,” Hill said. “Our setters are really stepping up and running the offense, communicating with the hitters.

“It’s been fun to practice those things, and when they get it, they get so excited because they’re like, hey, I can do that. So it’s been fun to see that and it’s still early.”

The setters directing the offense include senior Amberlyn Scruggs and junior Zaelea Eller. They’ll look to tee up kill attempts for a group that includes senior Elysia Smith, playing middle hitter, juniors Elena Carroll and Ada Kelley on the outside and sophomores Morgan Yoder (the returning all-conference selection), Sophia Overholt and Mia Bradley.

“I still call them my little freshmen, but they’re sophomores now,” Hill said of that frontline trio, each of whom started last season. “At one point, we have all three of them on the front row, and that’s one of our best rotations. It’s just dominating – they’re all three huge and jump so high.”

Senior Ella Waldman returns for a third season at libero and will be joined in the back line by defensive specialists and fellow seniors Lisa Jones, Jocelynn Ramirez and Annslee Kilgore.

Hill begins her ninth season at Polk County with a record of 142-53, with last year’s 14 losses matching the total for the previous three seasons combined. She calls the 2021 campaign a “good learning experience” for her young squad.

“Last year it was just hard to get them over that mental hump,” she said. “We’ve really been talking about that this year, just staying mentally strong and confident/ Yes, we are young, but we are right there and we are just as big and just as strong.

“We’ve talked about focusing on the team and the we of the team and not the I. We can’t think about ourselves right now, we’ve got to think about what’s going to be best for the team, or what I need to do for my teammates for this game, for this specific instance. Last year was hard, it was hard and difficult. But it was definitely something that we can take this year and, I call them we problems, these are we problems we can fix.”

A trio of Mountain Foothills 7 rivals – Brevard, Patton, R-S Central – each won at least 17 games last year, with Hendersonville at 13-9 and second in the league race. Brevard also returns its core lineup, including conference defensive player of the year Abby Pace, and is expected to be the team to beat, with Patton having to replace league player of the year Kenady Roper, now at Appalachian State, and R-S lining up without standout Makenzi Searcy, now at UNC Asheville.