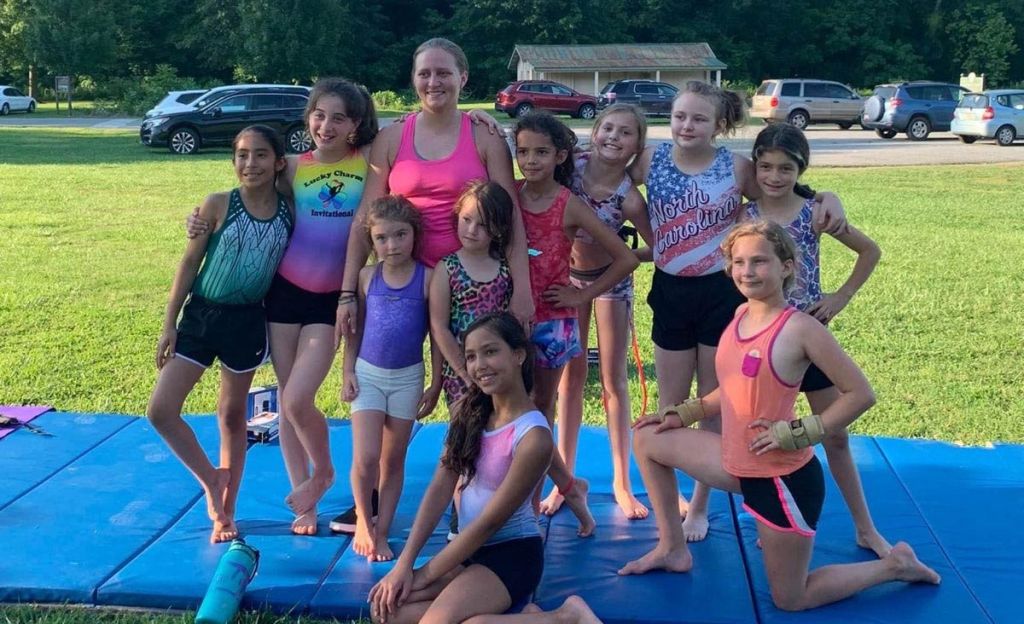 Jessica Sizemore has already been working with local gymnasts as a coach for the past two years.

First as a gymnast, then as a coach, Jessica Sizemore has spent large portions of her life in Tryon’s Foothills Gymnastics Academy.

Now she’ll be there even more often – as the gym’s operator.

When longtime owner and coach Jana Williamson announced plans to close Foothills Gymnastics and return to her native Czech Republic, Sizemore knew immediately that she wanted to open her own gym in FGA’s space. That’s what has transpired as Sizemore Gymnastics Academy is settling into the location on Academy Street in Tryon, with a grand opening set for August 13.

Sizemore and former FGA gymnasts have been hard at work painting and preparing for SGA’s debut.

“I am just beyond grateful to be able to train gymnasts in a gym that I spent a lot of time in as a child and again as an adult,” Sizemore said. “Where I have many memories that I am excited to share with them.

“I am also amazed that while I was in a transitional phase, many of the gymnasts would come to a park to continue to train with me and work hard all through the summer. On top of that, they still went to Nationals and became national champions.”

Sizemore, who has been coaching at FGA for the past two years, sees opening her gym in Tryon as both a natural progression to a gymnastics career spanning almost 30 years and a tribute to one of the coaches who helped shape her journey in the sport.

“I was part of Jana’s first competitive team in 1995,” she said. “I came here with my coach, Goetz Glitscher, who helped open the gym and start the legacy of Foothills Gymnastics.

“When he was asked to coach the 1996 Switzerland Olympic team, he took me to Kozeev’s World of Gymnastics (near Spartanburg). I can’t credit one coach as my inspiration as I had many fantastic coaches through my gymnastics career.”

Sizemore has already begun thinking about ways to expand the programs offered at SGA. In addition to the standard gymnastic sessions, she plans to offer Mommy and Me classes, recreational classes, boot camps and parkour.

She also definitely plans to continue the competition teams that have seen much success throughout the Carolinas and beyond in recent years.

“More inclusivity and creating a boys team, which has never been done in this area before,” she said of her goals for SGA. “Also, one day in the future, creating college-level, elite-level or, who knows, one day an Olympian gymnast.

“Really whatever direction the gymnast wants to go, I want to support that and make it possible. I want to promote a sisterhood and brotherhood that will last a lifetime.”

SGA’s grand opening will begin August 13 at 9 a.m., with plans for the day including games, door prizes, an hour of free gym time and demonstrations by some of SGA’s current national champions.

Sizemore is also offering half-off registration until August 13 and will typically be at the gym each day from 9 a.m. until 7 p.m. until the opening.

“Everyone is welcome, no matter age or experience,” Sizemore said. “I have huge plans for my gymnasts to give back to the community.

“Stay tuned. SGA is about to do big things and make a huge impact.”