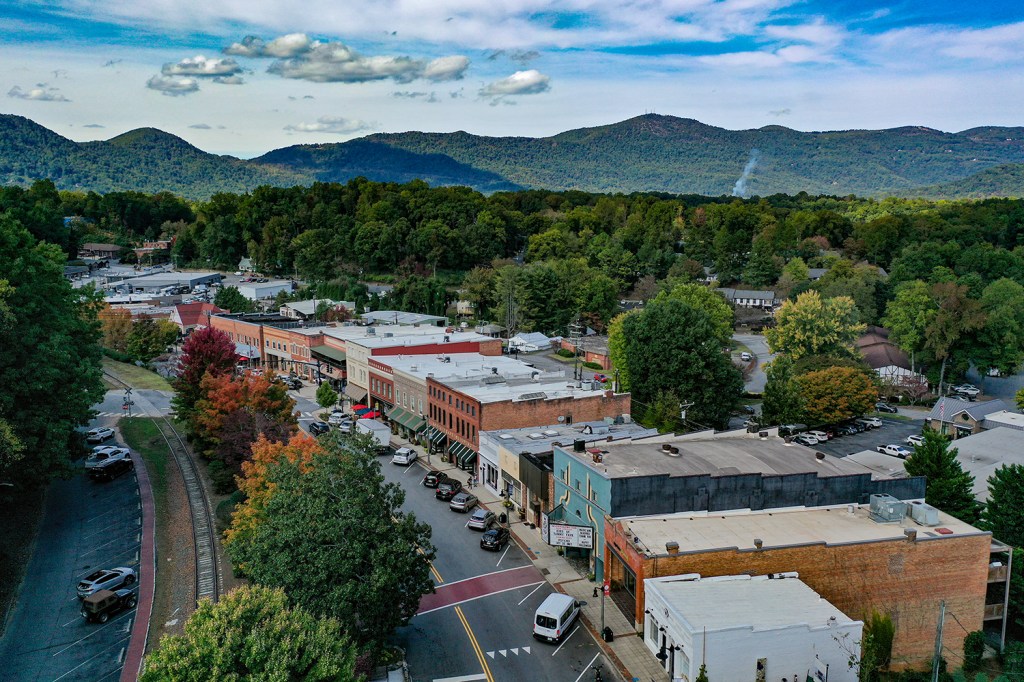 After several fits and starts through the years, the “idle” W line of the Norfolk Southern railway has drawn a new and fresh breath of air if a consortium of nonprofit organizations can work their way through hurdles thicker than kudzu and steeper than the Saluda Grade itself. The coalition of non-profits – Upstate Forever, PAL, and Conserving Carolina – have joined together as the Saluda Grade Partners, with intentions to transform the unused rail line into a vibrant trail corridor. 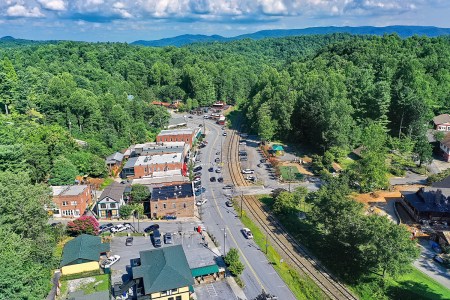 The Saluda Grade Rail-to-Trail trailheads would begin in Zirconia, N.C., and stretch 31 miles south to Inman, S.C., passing through the towns of Saluda and Tryon, as well as Landrum, Gramling and Campobello. The coalition envisions the trail as a multi-use path, beckoning people outdoors for walking, running, biking, adaptive mobility, and other compatible modes of recreation and travel.

The group has stressed the first hurdle to conquer is coming to terms with Norfolk Southern on purchasing the railway. Norfolk Southern Media Relations Manager Connor Spielman would not provide any information on the railway’s strategic assets out of respect for the inquiring party, but the South Carolina legislature has already appropriated $5 million dollars towards the 16-mile South Carolina section of the trail.

Conserving Carolina Executive Director Kieran Roe said negotiating the purchase would be just one cog in a long process to bring the project to fruition. Roe has had much success as the leader of Conserving Carolina, where their stated mission is to protect, preserve and inspire appreciation of the natural world. The organization has protected more than 47,000 acres of mountains, foothills, rivers and farms while creating new parks, trails and greenways for outdoor enthusiasts in Western North Carolina. He believes the Saluda Grade Rail-to-Trail would be a win-win for the communities and businesses along the railway and especially for those looking to experience this part of the region that is more challenging to get to because of terrain and access issues.

“We’ve been in promising conversations with Norfolk Southern and we understand they are interested in selling,” said Roe of the railway built in the 1870s with a 5-percent grade, making it the steepest mainline railway in the United States. It has been out of operation since 2001. “We will plan to use a combination of private funding, and public state and federal dollars to help secure the railway and to develop it with input from the communities along the trail.” 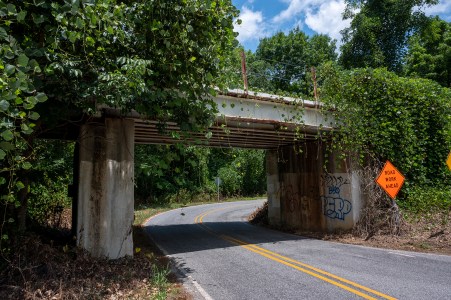 While the cost associated with the Saluda Grade Trail is steep, the economic benefits from the trail will be a significant windfall for the communities along the route, according to an economic impact study conducted by Clemson University. The study predicts communities will see a direct economic benefit of $27-30 million per year with an anticipated 282-313 new jobs created by the trail, including initial construction, ongoing maintenance of the trail, new businesses and development, and expenditures at those businesses by patrons and visitors along the trail corridor.

There have been inquiries in the past about developing the railway into a recreational trail, most recently in 2010 and again in 2017, but opposition from residents quieted interest at that time. One of those who spoke loudly against any development of the abandoned railway was Tryon resident Joyce Kimpton. She has lived in her home for more than 40 years and her property abuts the railway in her backyard. 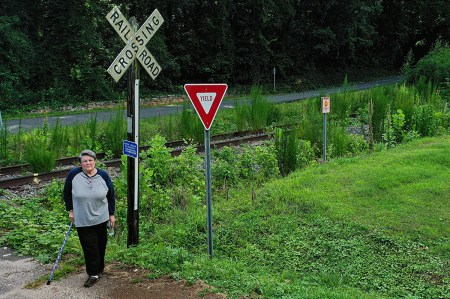 Tryon resident Joyce Kimpton is opposed to the Saluda Grade Trail running through the back of her property.
Aerial Photo by Cher Brown / Tryon Daily Bulletin

Kimpton has concerns that developing the railway into a recreational trail system will only bring an unwanted nuisance into her life. She said there are vagrants, bears, coyotes, druggies, overgrown vegetation and rodents on the railway now. She said a recreational trail would only increase her worries about trespassers, trash, overnight campers and disrupting the peacefulness of her neighborhood.

“For 30 of the 40 plus years I’ve lived here we’ve fought kudzu, wisteria, trees and rats that were on our property because the railroad does not maintain. They’ve not had a train on these tracks in years. They don’t do anything to the track unless I raise Cain – and I have,” said Kimpton standing near the dormant railroad crossing and overgrown railway at the back of her property. “Once complete, it would be a liability on the town which means my taxes are going up. I don’t want nor can I afford that. I just don’t want it in my backyard.” 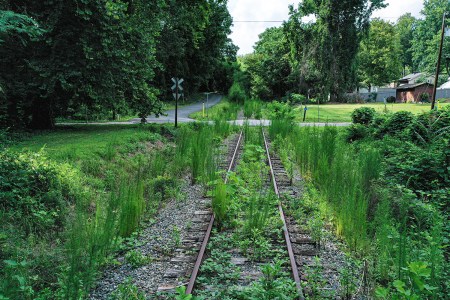 Tryon resident Joyce Kimpton is opposed to the Saluda Grade Trail running through the back of her property.
Aerial Photo by Cher Brown / Tryon Daily Bulletin

Kimpton also voiced her concerns regarding the issues of maintaining the trail, as well as shoddy phone service in the mountains, and emergency response which again, ultimately adds up to more property taxes coming out of her pockets. She said she is standing firm in her opposition.

“There are a lot of people who are concerned and don’t want the trail, but they don’t speak out because they’re afraid they’ll upset their neighbors or the people they do business with,” Kimpton said. She also stated there are several folks who are looking for original documents, they believe, showing their property lines going to the center of the railway. She questioned how Norfolk Southern can sell a right of way. “How can they sell something they don’t even own for millions of dollars?”

Upstate Forever Executive Director Andrea Cooper said there’s no way to ever have full consensus on a project, particularly one stretching 31 miles through multiple communities and two states, but she believes as they go through the process, the overall attitude of residents will be positive.

“We’re in the very early stages of this project, so it’s hard to say exactly what kind of reactions we’ll encounter, although on the whole people seem very excited about the idea of a trail,” Cooper said in a statement. “Our partners who’ve undertaken these kinds of trails say there’s typically some pushback at the beginning, but after a short while, the trail becomes seen as a beloved community amenity.”

One community that has already embraced rail-to-trail success is Travelers Rest, S.C. The Prisma Health Swamp Rabbit Trail runs smack-dab through the center of town and both residents and businesses could not be happier, according to Mayor Brandy Amidon.

“For us and our present-day success, the catalyst has been the Swamp Rabbit Trail,” said Amidon who described the trail as a linear park that runs through the heart of Travelers Rest. “It’s beautiful and safe. You see families, you have people on bikes, walking, and pushing strollers. You see people on rollerblades, and we have a couple of guys who ride unicycles, which is quite a sight to see when you’re walking or driving through downtown.”

She said the 19.9-mile trail is for everyone, and it has connected Travelers Rest with Greenville in a very special way that was not there before. Growing up in the area, Amidon said she never thought of Greenville as a tourist destination, but as mayor, she now sees how tourists want to experience the shops and restaurants of the big city while also experiencing the outlying areas of the region, and the trail has provided a unique connection between the two.

Campobello Mayor Jason Shamis cited Travelers Rest as a reason why he feels Campobello and all the communities along the proposed Saluda Grade Trail would benefit from its development.

“From a community standpoint, as well as my own opinion, I think it’s a great thing,” said Shamis. “The Swamp Rabbit Trail has done nothing but bring positive results to that community and I think it could do the same for Campobello.” 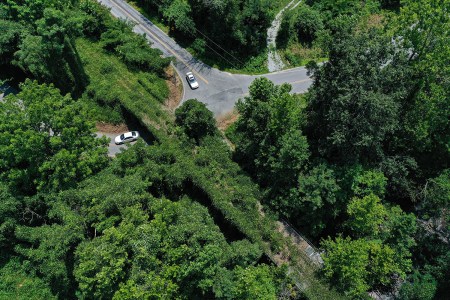 Shamis said the only apprehension he had was safety for those on the trail. He said he was not opposed to call boxes, camera systems or even having police patrols on bikes or segways to respond quickly if the need arises. He also stated the organizations looking to develop the trail have the experience and expertise to address these concerns as the trail becomes reality.

Landrum has already adopted the concept of a rail-to-trail project as part of their 2017 Envision Landrum Master Plan, according to Rich Caplin, city administrator for Landrum. He said Landrum has been onboard with ways to further develop their downtown area into a more pedestrian and bike-friendly area and the Saluda Grade Trail would complement their plans for future downtown development.

“The comments we’ve heard from residents regarding our Master Plan have only been supportive,” Caplin said.

In a statement from the Tryon Downtown Development Association, President Rodger Walker said the central part of their mission is their commitment to downtown revitalization through economic development. 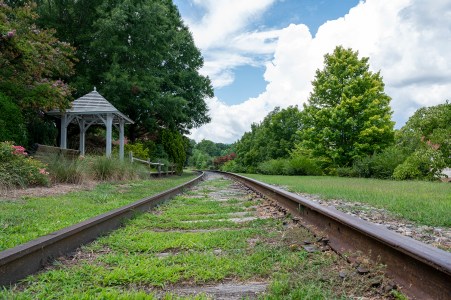 “We are excited about the opportunities the new rail-to-trail project will bring to our downtown businesses, and to new businesses that will locate downtown to serve the outdoor enthusiast who will be attracted to Tryon to experience the trail,” said Walker who pointed to Conserving Carolina’s release announcing the project. He said rail trails have a powerful track record as drivers of economic growth for small towns and rural communities. “We agree with Conserving Carolina that this rail-to-trail project will be a game changer and an amazing win-win for our communities!”