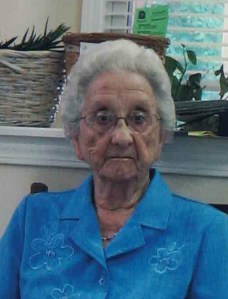 Affectionally known as “Aunt Pete”, “ Ms. Pete” or just “Pete “, she was the daughter of the late Thomas and Rosa Lee Raines Henderson.  She was the widow of the late Eddie Lee Brown and the Late Renzo Jones.

Aliscia was the oldest Member of Morgan Chapel Baptist Church, having turned over her life to Christ at the age of 12.  She worked many years at Mullins Cleaners in Landrum as a Seamstress.  She continued to alterations out of her home until her mid 90’s.

Surviving are her two Step-Daughters, Margaret Jackson Gosnell and Linda Jones Mills (William) of Columbus, and one Step-Son Ray Jones (Velma) of Green Creek.  Aliscia was also predeceased by an adopted son, Larry Brown, and a sister Naomi Henderson Walker.

In lieu of flowers, memorials should be made to the charity of one’s choice.

An online register is available at mcfarlandfuneralchapel.com