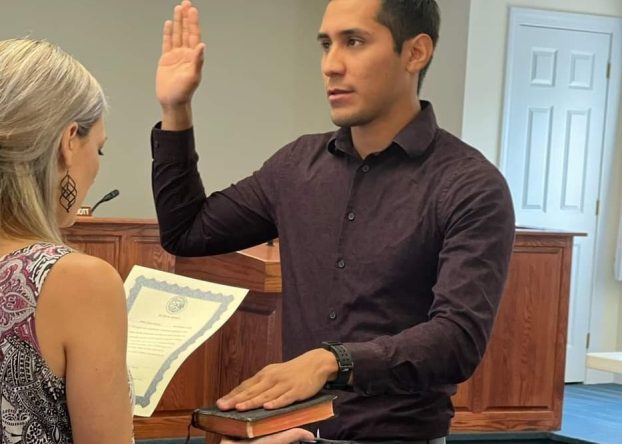 COLUMBUS– On Tuesday, July 12, Columbus Police Department welcomed Officer Julio Chavez to their ranks when he was sworn in by Chief Hamby and other officials.

Chavez says he was inspired to pursue a law enforcement career by witnessing how crime affects society and seeing how many people’s lives were damaged emotionally and physically by crime. His goals are to be able to help those in need and to be able to give back to the community in which he grew up.

With all of his siblings being involved in law enforcement, Officer Chavez looks to learn from and be motivated by his siblings as well as other police officers in the community, especially those within the Columbus Police Department.

“I applied for the Columbus Police Department because of the higher standard they are held to. The Columbus Police Department lives up to the definition of honor, integrity, courage, and public trust. I hope to live up to the high standards set by the officers before me. There is no better feeling than being able to serve the citizens of Columbus,” said Officer Chavez after being sworn in.