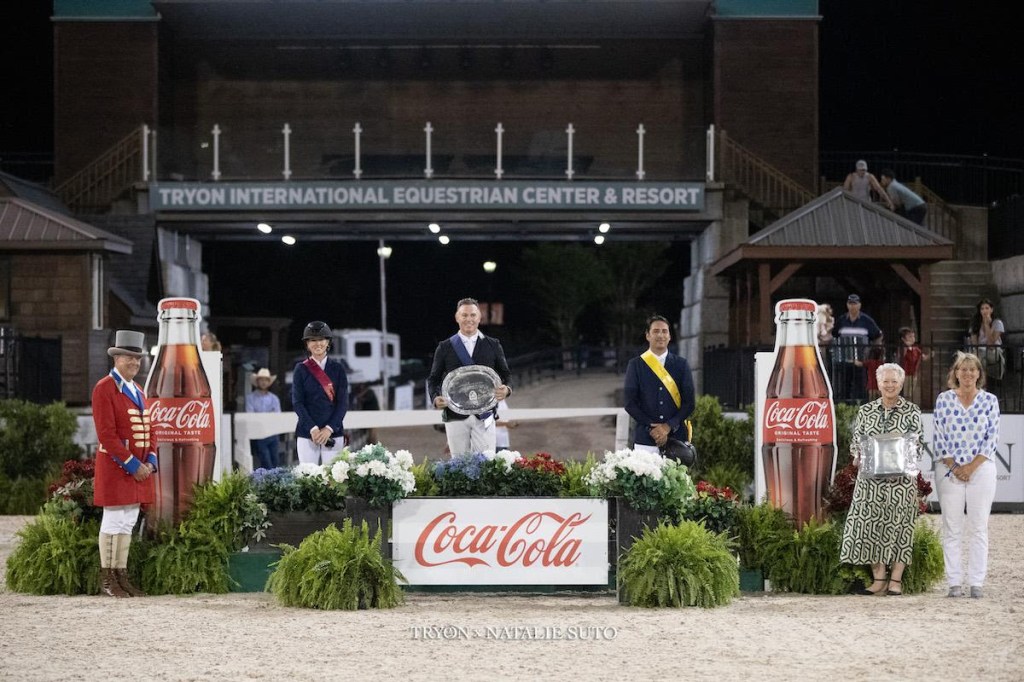 Mill Spring – Sharn Wordley (NZL) and Valentine Car floated to the win in Tryon Stadium, claiming the $139,000 Coca-Cola® Grand Prix CSI 3* win in a time of 31.42 seconds. Jacqueline Ruyle (USA) and her own San Chano, 2011 Oldenburg gelding (Sandro Boy x Chacco-Blue), cleared the jump-off course in 32.14 to take the reserve ribbon, while Luiz Francisco de Azevedo (BRA) and Nashville, the 2011 Oldenburg gelding (Sandro Boy x Chacco-Blue), rounded out the podium in a time of 32.57 seconds.

Thirty entries filtered through the first-round course design set by Alan Wade (IRL), with eleven pairs qualifying for the jump-off. Wordley and the 2009 Warmblood gelding (Son of Juan Car x Galiani CH) topped the class in style, even with the partnership being fairly new.

“He won the qualifier as well; he’s a fairly new horse for me,” said Wordley. “ I got him in the winter from Fernando Cardenas, who bred the horse. I just got him at the beginning of the year, and I just got to know him now where I feel like we have a partnership.”

For his jump-off strategy, Wordley said his goal was to simply go fast. “I saw Luiz go and he was quick; he did all the numbers I was going to do. So, I had to at least go as fast as him. So, I did the same numbers as him but my horse is just a bit of a faster mover. That was about all I could do; there was maybe one less to the last but I didn’t want to risk it.”

“It’s great to be here in Tryon as always,” Wordley concluded, “I jumped here at the very first show they ever did and I’ll be back again in two weeks’ time.”

Tryon Summer 4 continues through Sunday, July 10, with the $25,000 Tryon Resort Grand Prix. The competition is free and open to the public, also live-streamed. Saturday Night Lights presented by Tryon Horse & Home continues all Saturdays in July with additional dates throughout the summer. To learn more, visit www.Tryon.com/thisweek.

Submitted by Connelly Grant and Sarah Madden for TIEC