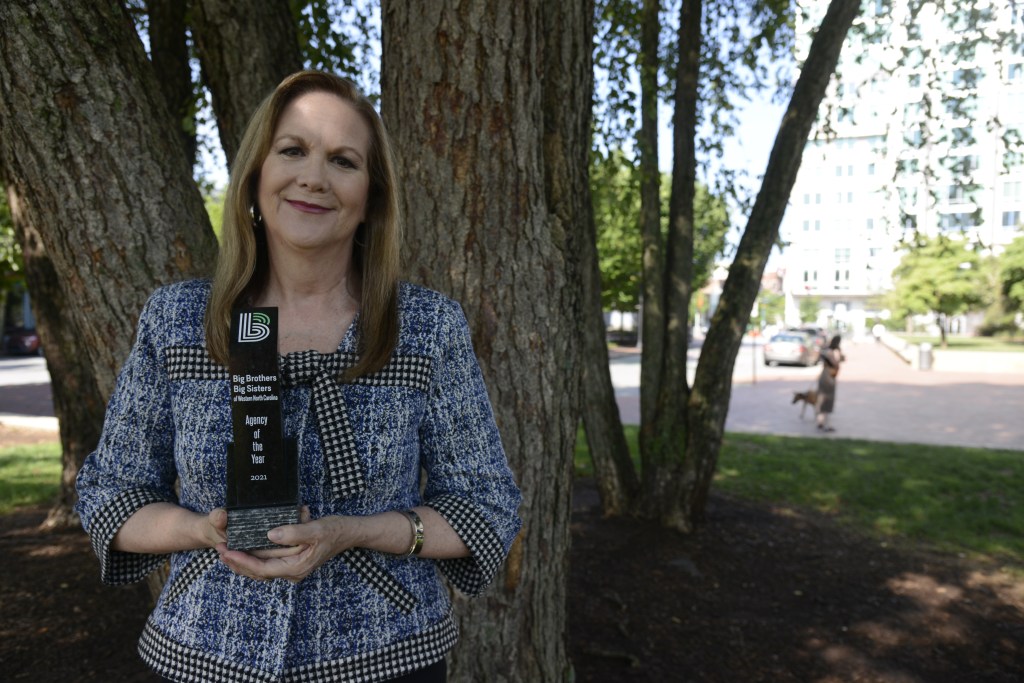 Debbie Charlton, board chairman of BBBS of Western North Carolina, helped guide work that led the organization to win this national award (Photo courtesy of BBBSWNC).

The honor, announced at BBBSA’s national meeting this month in Indianapolis, honors BBBSWNC for its “extraordinary commitment to innovation and creativity,” the national office said. Through the award, BBBSA recognizes agencies whose dedication and achievements have significantly furthered its mission of inspiring young people’s passions and empowering them to achieve success in life and career.

Led by CEO Lelia Duncan, BBBS of Western North Carolina (www.bbbswnc.org) created new and ambitious programs aimed at supporting the BBBS community throughout the challenges faced over the last several years. The Asheville-based agency, which coordinates BBBS support in 18 of North Carolina’s westernmost counties, worked tirelessly to serve not only its “Littles,” but their families as well. BBBSWNC demonstrated resilience during the pandemic, the national office said, not only by increasing financial reserves, but also by doubling its service area.

One of its major accomplishments was establishing a partnership with the Eastern Band of the Cherokee Indians. Through “exciting, fresh programming” like Club Summit and Success 360, the agency laid a strong foundation for youth to grow and learn in diverse platforms, while continuing to empower its members during turbulent times, BBBSA said.

“We are thrilled that we and our partners – Bigs, Littles, parents, guardians, sponsors, and community allies – have been recognized as the 2021 SMA National Agency of the Year for our commitment to the children and youth of Western North Carolina,” Duncan said. “National recognition of this sort inspires us to continue elevating our efforts to help every child in the mountain counties achieve their potential and promise through mentorship.”

“It is my absolute pleasure to celebrate our agencies across the nation that have shown extraordinary dedication to not only their organization, but to supporting their local communities as well,” says Artis Stevens, President and CEO of Big Brothers Big Sisters of America. “We thank Big Brothers Big Sisters of Western North Carolina for their continued power in mentorship and dedication, and the vigorous impact they have on their community.”

The awards ceremony was held in Indianapolis, Indiana, during Big Brothers Big Sisters of America’s annual “Bigger Together” National Conference, supported by Comcast/NBCUniversal and Centene. Nearly 3,000 in-person and virtual attendees from across the country joined to celebrate this year’s Agency of the Year awardees.