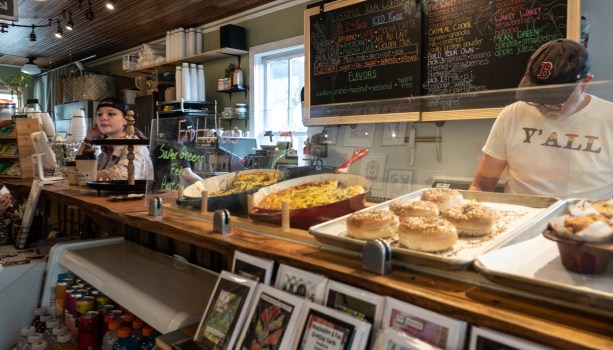 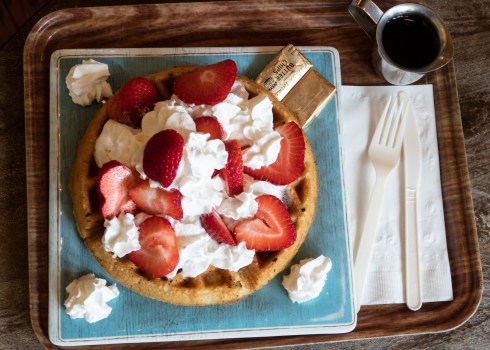 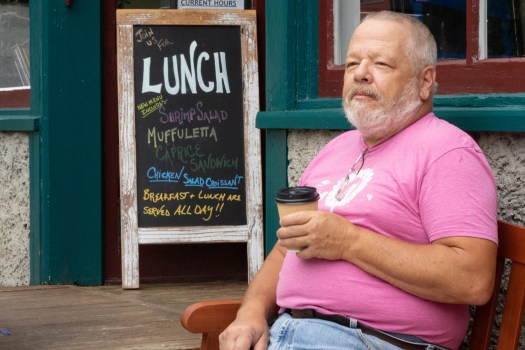 “The Wakey Monkey is community. It’s where you see your friends, where you’re treated like friends, and where wonderful coffee and good food are embraced by great people.” - Greg Bryant, local regular patron since day one 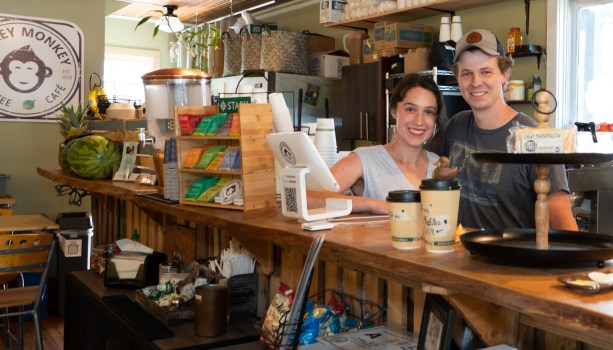 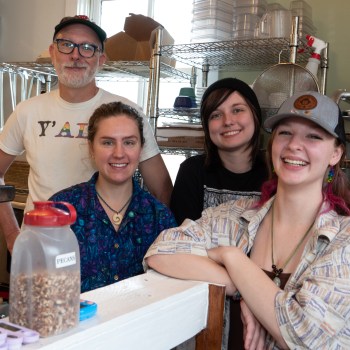 Some of the hardworking Wakey Monkey staff – Chris, Hayden, Maren, and Abigail. 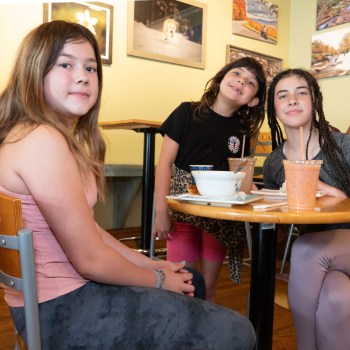 Ben and Haylie Land never intended to get into the restaurant game. Or perhaps it’s the café business. But for sure – Wakey Monkey in downtown Saluda is not just another coffee shop. It’s just different. It has a different feel to it. Relaxed, friendly, tasty. One step inside and you’ll become a regular. In fact, on any given day the shop is packed with regulars. Some of them just don’t know it yet.

Ben and Haylie both love coffee, and they never intended to own a coffee shop. As things sometimes happen, the opportunity came knocking. When Matt Holler, the original owner, announced he was moving to Colorado, Haylie knew that this could be the young couple’s next big adventure. After all, the couple loves adventures. The two met when they were working as professional guides for The Gorge, Saluda’s own zipline company. This led to marriage and then to the start of a young family that includes a daughter and a dog. But owning a coffee shop had still not entered anyone’s mindset until that announcement.

After their stint as zipline guides, Ben started his career as a welding and structural steel inspector. Haylie eventually took a part-time job as a barista at the Wakey Monkey. She thought this could be a good way to get out of the house for a few hours a day and learn more about making that perfect cup of joe. Since Ben was often gone on work trips for weeks at a time, working downtown seemed like a nice chance to get to know more of the folks in Saluda.

Haylie was sad to hear that Matt was leaving the business. It was his baby and he nurtured it into a successful downtown venture. But she wasn’t going to get too sentimental. Haylie texted Ben and said, “Maybe we should buy the shop?” Ben didn’t need a lot of convincing. He enjoyed his job, but the chance to be his own boss was too good to pass up. They discussed it and knew this kind of break might not come their way again anytime soon. They haven’t looked back.

Thankfully, Matt was around to help them get up to speed. Haylie and Matt didn’t miss a step. They were running a well-oiled machine by the date the sale was finalized.

It’s a lively place inside the Wakey Monkey. The place is always hopping with regulars and first-time customers alike. Seats and tables fill quickly. In the summer, it’s not uncommon to have a small line snaking out the door. It’s that good.

They have plenty of specialties including both veggie and meat frittatas that fill a showcase. The frittatas are usually gone well before closing time. Haylie says it’s their top-selling item. Their favorite smoothie is “The Wakey Monkey.” It’s made with peanut butter, a chocolate protein powder, bananas, and blueberries. Some people might think that’s an odd combination of items in a smoothie…but by far, it’s the one people ask for the most. The cinnamon buns are also a favorite, but actually…everything in the shop is someone’s favorite. The author can personally attest that the waffles are incredible!

There’s a lot of restaurant here, fitting into a relatively small space. Ben is quick to point out that there’s some seating out front and more seats around the corner that patrons can use. Artwork from several local artists decorates the walls. Ben and Haylie invite other local artists to fill any remaining space.

The couple immensely enjoys being part of the Saluda vibe. They are looking forward to getting even more involved in the community. They have a commitment to doing what they can to help promote the town. Ben and Haylie are already having an impact on the local scene by just being yet another great place to spend some time. Saluda has another gem in its crown.