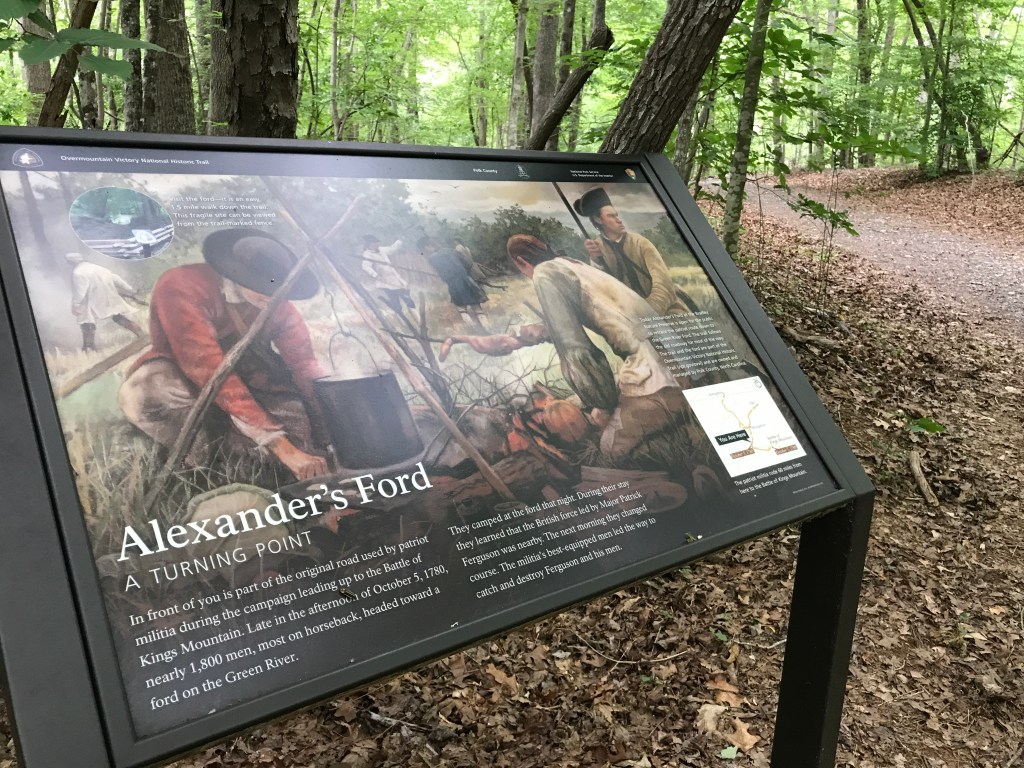 Signage at the trailhead describes the Polk County portion of the Overmountain Victory National Historic Trail at Alexander’s Ford.

Despite all my love for American period dramas like The Patriot —think of the costumes, the sweeping panoramas of idyllic farms, the intrigue of being in the middle of history unfolding! —I wouldn’t have lasted five minutes as a woman in the hardscrabble, somewhat anarchic mountains of Western North Carolina during the Revolutionary War years.

It is worth it, however, some 242 years after the Battle of Kings Mountain which occurred about midway through the Revolution in October 1780, to take a couple hours to walk the trail that the “Overmountain Men” took through Polk County on their way to decisively rout the Loyalist militia led by Major Ferguson. For an afternoon, close to the weekend we celebrate the independence these men so fiercely fought for. I could at least try to experience what they may have seen, heard, and felt.

Named for the fact that they descended the mountains of Virginia, Tennessee and North Carolina, the Overmountain Men weren’t authorized by the Continental Army, and they lacked military structure and supply chains. However, the scrappy backcountry revolutionaries made up for that by carrying necessities on their backs, using their rifles instead of muskets, and driving their own cattle on the trail as a food supply.

I was merely outfitted with my cell phone, small backpack, and a bottle of water as I started the 1.5-mile portion of the Overmountain Victory Trail located at the eastern edge of Polk County in Bradley’s Nature Preserve. Immediately the wilderness enveloped me, trees were jungle-like in their thick canopy. About six to eight feet wide and alternating from gravel to sandy clay to grass, the trail unfolds through woods and meadow to where the men would have crossed the Green River at a narrow point, hence the name Alexander’s Ford.

This part of Polk County feels remote, and probably closely resembles what the Overmountain Men would have encountered on their advance. As you amble down the trail, the sounds of the modern world quickly fade away.

I stopped and glanced around. For a few minutes it was absolutely, eerily silent. Suddenly I heard a rustling of leaves, felt a slight breeze, caught shadows moving out of the corner of my eye. For a moment I wondered if a column of men in 18th century ad hoc militia garb had passed me by in another dimension of time and space. Would they have been talking about their lives back home, or maybe singing Scots-Irish songs to pass the time? Or perhaps they were forging ahead silently to avoid giving away their location to British scouts?

Invisible deer bugling in the woods startled me out of 1780. A hawk screeched overhead, and bugs buzzed about. As I continued, I noticed animal tracks, mostly of horses, but some deer, and a fox. My heart skipped several beats (and probably stopped) when I rounded a tree at the meadow and nearly tripped over a lengthy black snake.

Wild blackberries grew around an Overmountain Victory Trail sign, and orange trumpet vines in full bloom wrapped themselves around trees.

The trail ends at a beautiful meadow by the Green River, with a small path to a picnic bench and the river’s edge. There is a rocky sandbar that reaches halfway across, a perfect place to stop and watch the cool water lazily gurgle by. In the emptiness of the quiet meadow, I wondered what it would have looked like crowded with 1,000 men, their horses, and cattle. 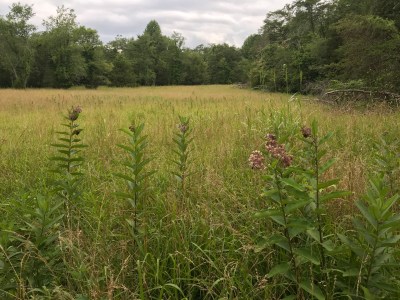 A bucolic meadow would have been a resting spot for the Overmountain Men before they crossed the Green River at a narrow point on their way to King’s Mountain.

It’s an enjoyable, easy hike, and a great way to introduce Revolutionary War history to kids. There’s a map at the start of the trail that shows the entire Overmountain Victory Trail starting in Abingdon, Va. and ending in King’s Mountain. Of the 330 miles the men covered, some 87 miles are now maintained, walkable trails.

If you’re looking for something to do over the July 4th weekend and want to walk in the footsteps of our country’s Patriots, take NC Hwy. 108 from Columbus east for 13 miles towards Rutherfordton. Before you get to the Polk/Rutherford county line, turn right on S. County Line Road. Proceed about 1.6 miles (follow the signs to Gray’s Chapel). In the clearing where Gray’s Chapel and cemetery are located, take the gravel road that bears right behind the church’s auxiliary building, to the entrance to the trail. You will see the National Park Service signage. Drive past that to a picnic shelter, parking area, and trail head.

Incidentally, Gray’s Chapel cemetery is the resting place of one of Polk County’s few known Revolutionaries. The tombstone of Sgt. James Grey (spelled the British way) of the 1st North Carolina regiment is towards the back of the fenced cemetery. That regiment saw quite a bit of action through North Carolina, South Carolina, Pennsylvania, New York, New Jersey and Georgia between 1775 and 1781, but was not involved in the Battle of King’s Mountain.

At the battle’s 150th anniversary, Herbert Hoover said, “Here less than a thousand men, inspired by the urge of freedom, defeated a superior force entrenched in this strategic position. This small band of Patriots turned back a dangerous invasion well designed to separate and dismember the united Colonies. It was a little army and a little battle, but it was of mighty portent. History has done scant justice to its significance, which rightly should place it beside Lexington, Bunker Hill, Trenton and Yorktown.”

I may not have made a good frontierswoman, but I do know I’m incredibly lucky to be able to step out of the Polk County of 2022, if just for a little while, into the wilderness of a woodsy trail that played a pivotal role leading to the independence we celebrate this weekend.