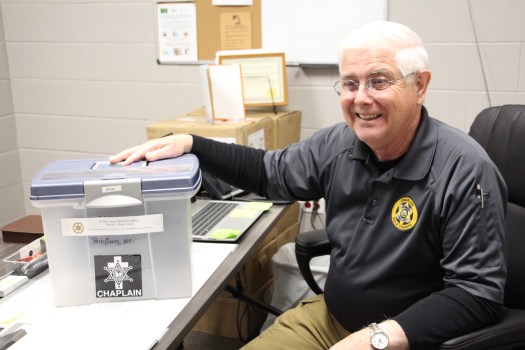 Chaplain Chris Osborn is pictured with his file folder “office,” a portable container that held all he needed in the days before he had a physical office in the new Sherriff’s Department. One of 72 employees of the department, Sheriff Wright describes the soft-spoken chaplain as compassionate, resourceful, easy going, and “an invaluable member of the Polk County Sheriff’s Office.” 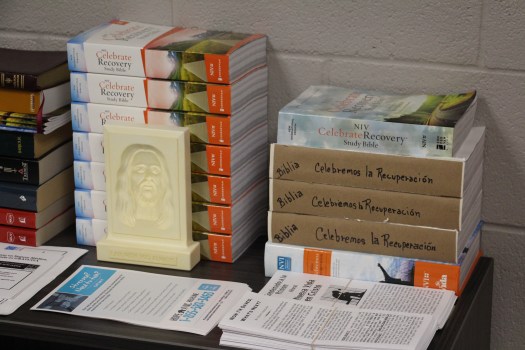 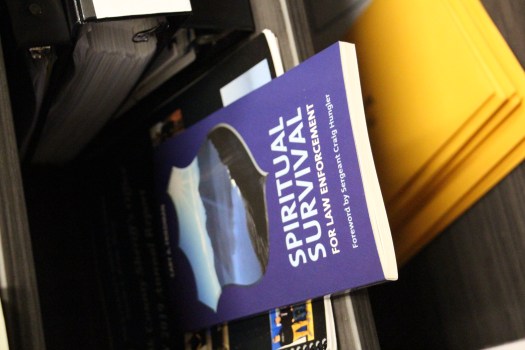 One aspect of Osborn’s work is to minister to officers facing spiritual challenges brought on by the demands of the profession. One way to do that is to rely on advice by and for law enforcement officers specifically. “Law enforcement is a very stressful job. The situations you see and are exposed to while on the job can weigh on a person and can sometimes bring about depression if an individual doesn’t know how to cope or express their emotions,” says Sheriff Wright. 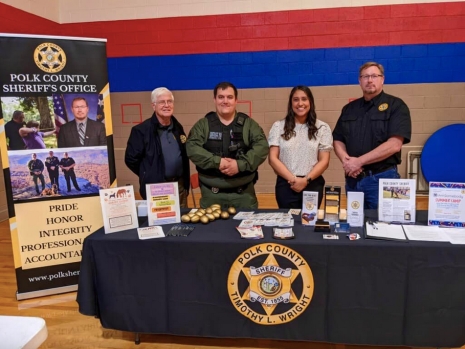 Osborn, left, pictured at Polk Central Elementary’s Kindergarten registration event in April, frequently attends community outreach events like this one on behalf of the Sheriff’s Department. According to Sheriff Wright, at right, “Chris always seems relaxed even at the special events the Sheriff’s Office hosts. He is able to talk to anyone he meets and is well known in the community.” (Photo Polk County Sheriff Instagram) 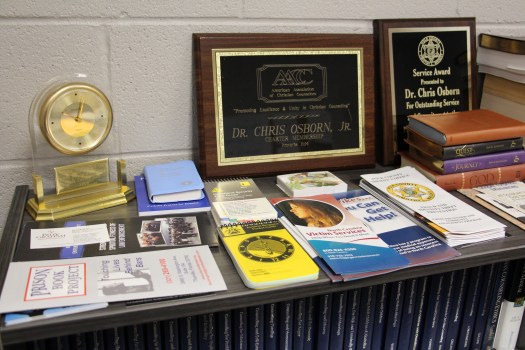 One end of Osborn’s office features bookshelves with pamphlets, booklets, Bibles, and other reading material intended for officers and inmates alike. 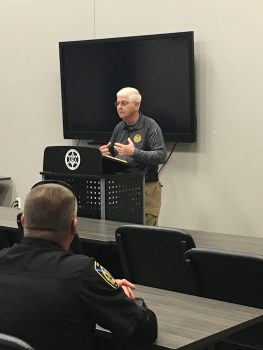 On a recent early Wednesday morning prayer service for officers, Osborn reflects on nuggets of wisdom found in Proverbs 10. When you throw a rock in a pond, the ripples affect the whole pond, he said. “Think about the people you’ll meet today,” he told those gathered. “Everybody you meet you’ll make some kind of impact on their lives. You make more impact than you maybe realize. Will we make a good impact?”

For years, he carried his “office” around with him in a hand-held plastic file box because his job took him all over the county, at any given time of day or night. Nowadays, in the new Polk County Sheriff’s Department, Chaplain Chris Osborn has an actual office, with fresh gray paint, desk, laptop, chairs, bookshelves, phone, and lots of room for boxes of donated Bibles.

For over 20 years and through four sheriff administrations, Osborn, 71, has ministered to and counseled members of Polk County’s law enforcement agencies, fire departments and EMS, as well as their families. Thoughtful and soft-spoken, he also leads a ministry for inmates, assisting them with their spiritual needs while incarcerated, and providing support at their release.

He is, according to his boss Sheriff Tim Wright, compassionate, resourceful, and easy-going in an environment that can be stressful and dangerous.

“The fire department is what got me started,” Osborn recalled about his life of public service which includes 22 years with the Mill Spring Fire Department. After a fire in which two children died, Osborn’s son, who was also a firefighter, was “shook up” emotionally, as the children were cousins of their own foster children. Osborn, who had pastored Faith Temple Baptist and Silver Creek Baptist over his long career, approached the fire department about becoming its chaplain to assist members through tough times.

“They’re human, too, and things affect them,” Osborn says of the county’s public servants who see trauma on a more frequent basis than the general public. “The suicide rates, divorces, and addictions … the state and national statistics are amazing,” he said. “Different things bother people different ways.”

“Law enforcement is a very stressful job,” says Wright. “The situations you see and are exposed to while on the job can weigh on a person and can sometimes bring about depression if an individual doesn’t know how to cope or express their emotions. Chris is here for that very reason. If someone needs to talk, look for advice, or have a general conversation with someone who is a voice of reason, sincere and honest, Chris is the one to go to.”

It isn’t just after an event that law enforcement calls upon him. Sometimes they need prayer before embarking on a dangerous mission. Osborn recalled a moment when he gathered federal marshals and SBI agents together to pray before going out on a raid. Or sometimes, officers need encouragement at the start of a regular work shift, so he’ll offer a 30-minute prayer service in the training room.

Community outreach is another facet of his work. He attends the department’s Back to School Giveaway, holiday activities hosted by the sheriff’s office, drug take-back events, and Shop with a Cop, a nationwide event where members of law enforcement take children shopping for Christmas presents. He also leads devotions at the Senior Center on Tuesday mornings.

“In a typical day, Chris makes contact with individuals and organizations that the sheriff’s office may be able to partner with in ways to benefit our community,” says Wright.

The chaplain job may technically be a part-time county position, but Osborn says it is a “24/7 calling” and he is always available to whoever needs him, including the school system. He has assisted with counseling for students and faculty when students have died, and he has conducted funerals for two students in recent years.

“Those are the hard ones,” he said quietly. Children have been a large part of his life. He has three children with his wife of 53 years, Judy, nine grandchildren, five great grandchildren with one more on the way, and was a foster parent to many over the past 20 years.

He has also performed funeral services for family of law enforcement, and three memorials for K-9s who are considered valuable members of the law enforcement family.

On the other side of a heavy, black, steel door at the end of a hallway in the sheriff’s department is the jail, and another aspect of Osborn’s work.

Before Covid-19, he conducted services on Sundays and Thursdays for the inmates. Covid has changed their ability to gather, but Osborn still visits, cell to cell, distributing Bibles, devotional magazines and self-study booklets provided by Gospel Express Ministries, a prison ministry in Lynn. To those who request it, he delivers the Celebrate Recovery Bible which uses the 12-step process, Biblical principles, and testimonials. He also assists inmates with the process of setting up virtual family visits via video link.

Not every inmate is Christian, he says, and he “deals with a wide variety of belief systems and no belief system.” When he is unfamiliar with a particular religion or belief system, “I Google it,” he says while gesturing to his laptop.

The problems inmates face upon release is often complex and overwhelming. Part of Osborn’s ministry is to assist inmates with getting back on their feet in society and on the right path. He provides a booklet with phone numbers of resources, advice for forming healthy friendships, establishing a support network, and where to go for rehab if needed.

Or, it could be as simple and practical as having a proper set of clothes to wear upon release.

“An inmate could have come in during the summer wearing flip flops and shorts and get released in winter with six inches of snow on the ground,” he said. In those cases, he draws upon a network of church friends, and can secure donations of shoes and clothes for those who need them.

Wright says that Osborn also provides a “voice of reason” to inmates.

“He is available to inmates and their families,” says Wright. “He helps guide people in the right direction spiritually and provides accessible resources within the area.”

The path inmates take upon release varies, Osborn recognizes, with some recidivism and some success.

He has been approached in public by former inmates who thanked him for his counsel while they had been incarcerated. He ran into a former inmate at an event recently who had since married and made strides in life.

“Life’s hard, and reality hits people when they come through [the jail]. You never get used to the sound of that door closing. But it’s good to see a positive outcome, and we have those from time to time,” he said.

“Hope is always available,” he says, “and it’s just up to the individual whether they choose to accept it. You’ve always got a choice, and every choice has consequences, whether good or bad. I don’t really get down. If I can help one person, it’s been worthwhile.”

Despite now having an office, Osborn doesn’t look completely “settled in.” Although two bookcases have been neatly organized with pamphlets and plaques and Bibles, there are still boxes upon boxes of Bibles and booklets and pamphlets stacked by his desk. The walls are somewhat bare, save for a bulletin board.

And there is still the ever-present plastic file tote-box sitting at the ready within easy and convenient reach, a reminder from his earlier days that the office of chaplain is not confined to any one room, but within him, portable, and at-large.