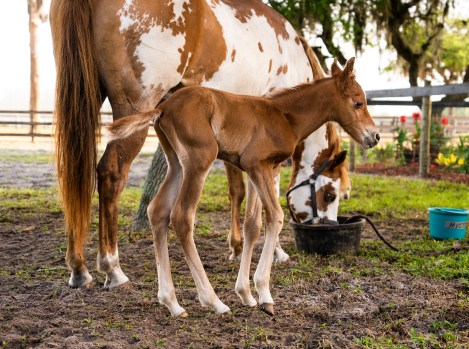 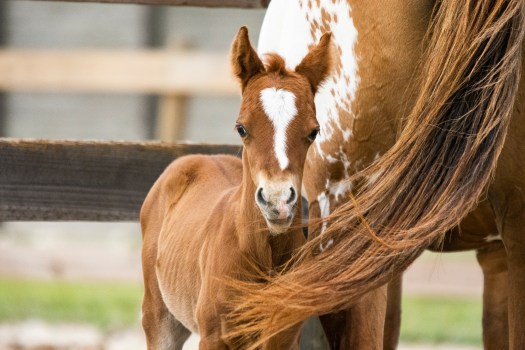 Mystic eating lunch with Avenue by her side 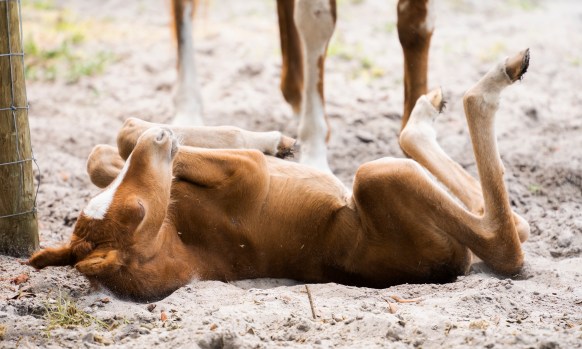 Avenue of the Stars taking a nap, rare to be on his back 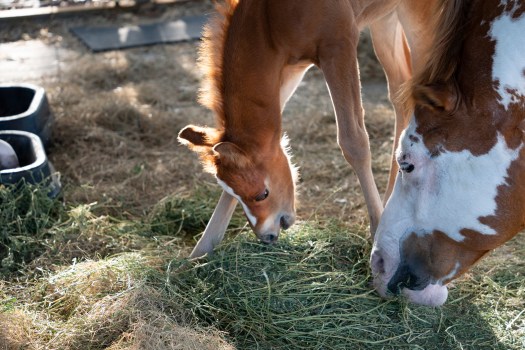 Avenue of the Stars’ first taste of hay 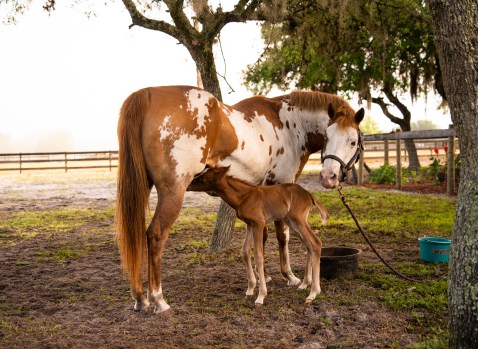 Mystic, with newborn foal Avenue of the Stars nursing on its first day 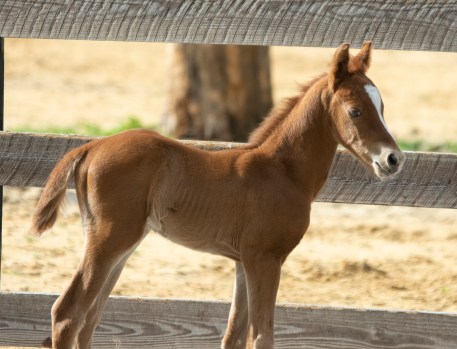 Avenue – a way of approaching a problem or making progress, is one definition of this straightforward noun. A broad road into a town or city, typically having trees at regular intervals along each side, is yet another. Our new arrival, born in HERD as a gift from the mare Mystic, fittingly relates to both.

It is no surprise that volunteer Bill McClelland finds all the newborn arrivals. He is up with the sun for morning chores. He tackles feeding time for nourishing our expansive list of equines. The number of mouths to support has grown by leaps and bounds since our rescue, Helping Equines Regain Dignity (HERD), was founded. With so many young horses here on the ranch, we keep a feed logbook which is regularly updated on who is fed what and how frequently per day. Ten equines here need soaked alfalfa added to their diet, while others need a caloric balancer to keep their weight in check. It is too much for any one person to remember without consulting our feeding guidebook these days. I of course stay on a low sugar and low starch diet plan to maintain my perfect figure for photo shoots.

It is always Bill that alerts us all when there are eight legs in the morning when only four were there at night check the previous evening. Such is the case with the arrival of paint mare Mystic’s new colt, Avenue of the Stars. He came ahead of schedule to surprise us all. The size of this newborn foal was alarming, as he was so tiny for a horse colt. Healthy, with a beautiful build, and bright chestnut coloring, Avenue sports a unique tapered blaze of white on his face. He is a marvel to behold, even during his first moments, standing on his slim, trembling legs.

Avenue, the new HERD member, was discovered within an hour or two of being born. He was wobbly on his four feet and attempting to nurse. Minutes later, while resting under his mother on the ground, we could see his fairy fingers or eponychium, the soft capsule that protects the mare’s uterus from the sharp edges of the foal’s hooves during pregnancy and birth. The rubbery slippers also protect the mare as the foal travels along the birth canal. These fairy fingers begin to dry out and fall/wear away the minute that they have contact with the air.

This perfect protective “hoofwear” design is there for an important reason. Predators are attracted to the smell of the mare’s placenta on the ground, so it is necessary for the foal and its mother to be able to move away from the birthing spot as quickly as possible — so the foal needs to have fully formed hooves at birth. During the foal’s first venture across the ground the soft hoof capsules are worn down to meet the level sole, revealing the hooves we are used to seeing. Since Avenue’s fairy fingers were visible, we knew he had recently made his arrival.

Mystic, his anxious mother, seemed as surprised by the new gift of life as we were. However, she quickly took to motherhood like a duck to water.  There was just one little hiccup. Mother Mystic was not producing much milk and our new Avenue was hungry. As the day progressed, we all grew a bit concerned that Avenue was not receiving enough milk as he attempted nursing nonstop. The vet was called for guidance, and he made an appointment to come out and examine the pair the following afternoon.  Blood was drawn from both equines, and Mystic was checked to be sure she had cleared all the birthing materials. All was correct on both fronts but to increase her milk production, she was given a shot of Oxytocin, with five more to follow over two days. Maiden mares sometimes do not produce an abundance of milk. As the week progressed, Avenue grew rowdier and was gaining weight, so we all breathed a sigh of relief.

People may question how we produced the name, Avenue of The Stars, for this little colt. Well, it is kismet how it came about in a miraculous way. A kind angel donor, who was relocating from California to Tryon,  helped us save Mystic. Her only request was that we name the mare Mystic as a tribute to her deceased horse. Then another kind angel donor, also located on the West Coast, wrote us asking if we would like help supporting Mystic’s foal when we learned she was pregnant. Again, we gladly said yes and offered to let her name the foal in gratitude for the sponsorship. She requested the name Avenue of the Stars, based on her home address.

When the colt was born, we announced his arrival to HERD members with the appointed name. Both donors were thrilled to see his photos. Both donors loved the name. The first donor, who sponsored Mystic, inquired how we came up with the name Avenue, as it happened to be the name associated with her professional company.

The coincidence was not lost on me. I have incredible instincts and intuition. The two women did not know each other. However, they made staying alive and receiving diligent care possible for these two equines. Their generosity presented an avenue for the duo to reside comfortably in HERD. Before moving to our rescue, Mystic was being shipped to slaughter because she was so lame, she could hardly walk. None of us knew at that time Avenue was part of the package. Clearly, the outcome of this intervention was perfectly aligned in the stars.

We anticipate grand accomplishments for this spirited colt as his life unfolds. Possibly a stint in motion pictures based on his name. He might just possess a star on the celebrity sidewalk, the Hollywood Walk of Fame, after a career paved in prestige. Well, at least here in HERD among his adoring fans, our Avenue of The Stars can stroll the tree-lined drive with a confident step to his sweet stride.