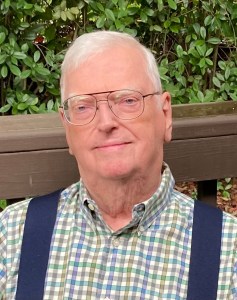 Landrum– Chester Cattell Collins, Jr. departed this world for his heavenly home May 24, 2022.

His strong Christian faith assured him that eternally he would be in the light of our Lord’s love. His faith gave him peace even as he struggled with illness and pain for much of his life, beginning when Addison’s disease nearly ended his life at age 24. His wife, Elaine, did not expect to him to survive until their 2nd anniversary but they were just four days shy of celebrating 62 years of marriage.

Chester completed medical school at Univ. of Maryland School of Medicine, followed by a residency in pediatrics. He is survived by his wife, Elaine, three sons Paul (Michelle), Jeffrey (Coleman) and Andrew (Laurey) and a sister-in-law, Mariana Warner. Beloved grandchildren are Ian, Benjamin, Finley, Shannon and Jonas. Predeceasing him were his parents, Chester Sr. and Elizabeth, and his siblings, Edward, Jean, and Patricia. Other survivors include several nieces, nephews and cousins.

Chester bonded with people of all ages and from all walks of life. He especially loved children and was a magnet for them. One toddler called Dr. Collins every day on her toy telephone. He had a special skill  for making difficult diagnoses and he saved many lives. Dr. Collins never stopped grieving for the patients who were too sick to save.

Chester practiced medicine and raised his family in Salisbury, MD. He loved his job but had to retire in 1986 because of his own medical conditions. In 1987, they moved to Asheville, NC and in 2001 they moved on to Landrum, SC. Chester had a sportsman’s soul, and he loved to explore, read, cook, watch outdoor shows on TV, tinker and he enjoyed feeding food scraps to the crows.

In the end, good medical care and the love and presence of his family allowed Chester a peaceful passing. His family and friends will surely miss him but feel greatly blessed to have had him in their lives.

In lieu of flowers, please consider a donation honoring him to Sandy Plains Church, St. Jude’s Hospital for Children, or a local hospice.