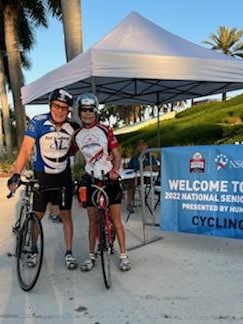 Kip and Carol Jean Vosburgh both qualified for and competed in the National Senior Games (NSGA), held in Ft. Lauderdale, Florida in May. The games are for athletes over fifty. Contenders are divided into 5-year age groups, male and female. To qualify for nationals, one must place in the top 4 age group in local competition, then top 3 in state competition.

NSGA is a non-profit organization dedicated to motivating adults to be active and lead a healthy lifestyle. Beginning in 1985, the Games, a 20-sport, biennial competition for men and women, is the largest multi-sport event in the world for seniors. Venues include activities such as cycling, track and field, swimming, bowling, and even corn hole and pickleball. Competing at the national level brings together the best of the best from all 50 states.

Carol Jean and Kip competed in the 75-79 age group. In the triathlon, Carol won the silver medal with a 2nd place finish. The triathlon was held in Key Biscayne and  included a quarter-mile ocean swim, followed by a 14-mile bike race and then a 5K run. She also competed in the 5K and 10K cycling time trials, placing 1st in both, and winning gold.  Kip also competed, placing 12th in the 5K,  and 10th in the 10K.