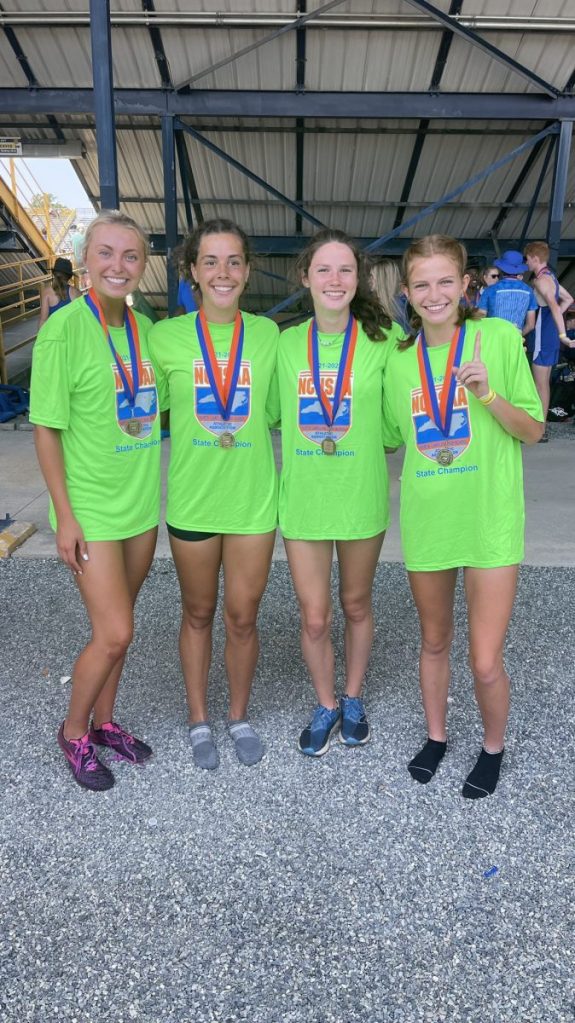 Throw in another title during the meet and the Wolverine program couldn’t have scripted a much better afternoon.

Polk’s girls 4×800-meter relay team, Olivia Overholt in the 800 meters, and the Wolverines’ 4×400-meter boys relay squad all raced to victories during the state 2A meet, held on the campus of North Carolina A&T State University in Greensboro.

It marked the first time since 2008 that Wolverine competitors scored three state outdoor titles in a day, and the triumphs helped the Polk girls finish tied for fifth overall and the Wolverine boys place eighth. The three championship efforts also unfolded in very different manners

Polk’s girls 4×800-meter relay team entered with the fastest qualifying time in the event and wasted no time showing why. Leadoff runner Lindsey Jenkins quickly grabbed the lead and never let go, giving Kinsley Huskey a margin of a few seconds at handoff. Huskey widened the gap before handing off to Tori Thompson, who pulled away even further.

Three years ago in this race, Overholt faced a deficit of almost a full straightaway when she started the anchor leg, nearly rallying from that margin to win. This go-around, she took over with a massive lead and kept it, crossing the finish lead more than 20 seconds before Camden County’s anchor with a time of 9:59.89.

In the 800 meters event Overholt, the top seed in the race, moved to the front of the field in the first 200 meters and never lost the lead, holding off Salisbury’s Sutton Webb to win in a time of 2:18.50. Jenkins placed ninth in 2:31.94.

Not since Elisabeth Elliott in 2005 had a Polk female won multiple state titles in a single meet, and Overholt joined Karen Godlock and Jennifer Dimsdale as the only 800-meter girl’s champions in school history.

It marked the final individual race of her Polk County career, and the normally reserved Overholt raised her arms in celebration as she crossed the finish line. Assistant coach Dewayne Elliott predicted last fall that Overholt would claim the 800-meter title, and the Polk senior made good on that vision.

Edwards briefly lost the lead, but roared back over the final 150 meters and gave anchor Bryce Jergenson a lead at the handoff.

Runners from Monroe and Walkertown pushed Jergenson over the final 200 meters, but the Polk senior kept them at bay, crossing the finish line in 3:27.71.

It marked the first 4×4 boy’s state relay win in school history and just the second title in any relay.

There were a number of other outstanding Polk County efforts on Friday.