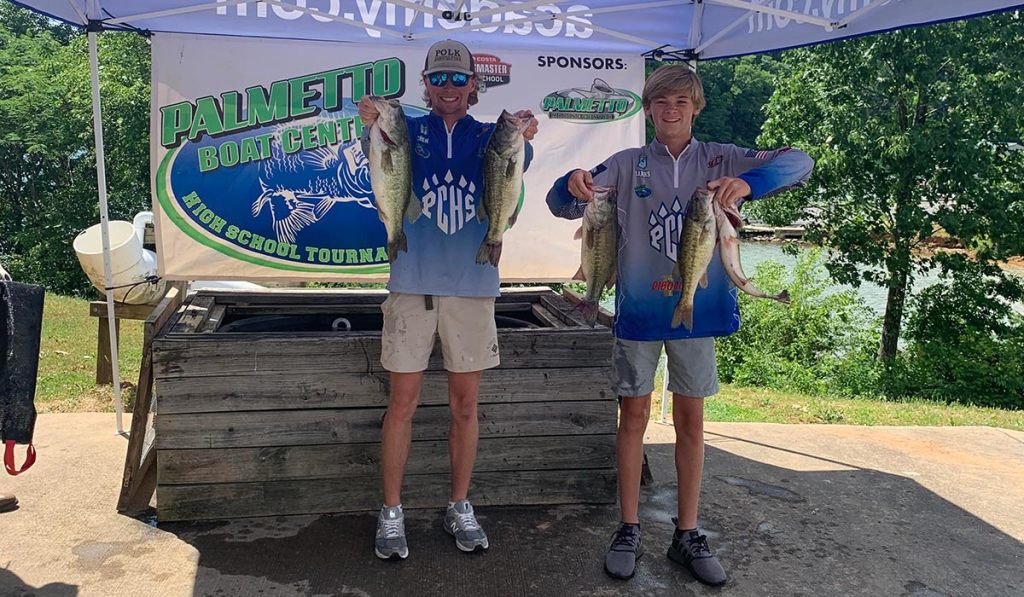 Chan Barber, left, and Banks Barber display some of the fruits of their labor at the PBC Classic (photo courtesy Chauncey Barber)

The Polk Bass Team had a memorable finish to its competition this season on the Palmetto Boat Center High School Fishing Trail.

The Polk County duo of Chan Barber and Banks Barber took part in the PBC Classic on May 13-14 at Lake Lanier in Georgia. The Classic was limited to 80 teams, and Polk County entered seeded 10th among those 80 entries.

The opening day of the Classic proved a near-disaster for the Barbers as wiring and battery issues limited their time on the water. The team did catch three fish for a total of 5.211 pounds, ranking them 57th after the first day.

“The boys were devastated after the first day,” said Polk coach Chauncey Barber. “I told them not often are you given a second chance, but you have another day to fish and you can show them that you are one of the best teams around.”

Make a statement, the Polk team did. With boat issues repaired, the Barbers netted the second-highest total of the second day, catching a total of 16.22 pounds, to place 20th overall in the Classic.

That finish helped Polk Bass complete the PBC Trail as the ninth-ranked group.

“Banks and I fished Lake Lanier several times over spring break preparing for this tournament,” Chan Barber said. “We wanted to win, but things happen, and we are grateful to have gotten the opportunity to make it to the Classic.

“This was our goal and to win a few tournaments, which is what we did.”

The team will conclude its season on June 22-25, competing in the 13th Annual High School Fishing World Finals and National Championship in Florence, Ala. on Lake Picwick.

“It was a great season and I am thankful that I got to be on the same team as my brother,” said Banks Barber. “We are both competitive with each other, but we found out that we make a good team as well. I will definitely miss him next year.”