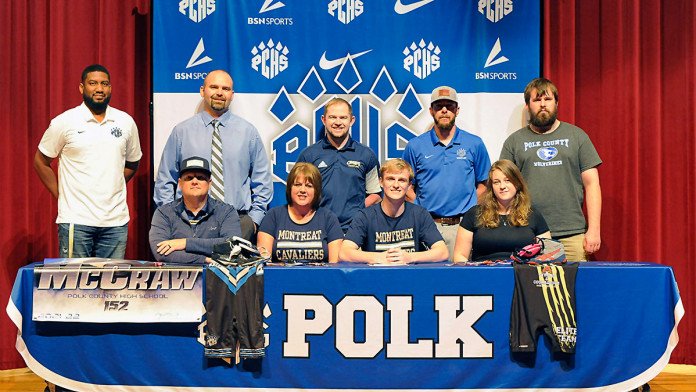 Bryson McCraw hopes he has set an example for future Polk County wrestlers to follow.

“All the youth wrestlers, the ones in middle school, the ones in high school now, you can accomplish this, too,” McCraw said.

This, as in McCraw’s signing to continue his wrestling career at Montreat College. The Polk County senior inked his letter-of-intent Wednesday during a ceremony in the Polk County High School auditorium.

Among those present for McCraw’s big day was PCHS Principal Dr. Brandon Schweitzer, who praised McCraw while also noting that it has been a number of years, more than anyone could remember Wednesday, since a Polk County wrestler garnered a college scholarship opportunity in the sport.

“What I love about Bryson McCraw is that having him around your program makes your entire team better,” Schweitzer said.

Had you asked the freshman McCraw about his chances at a college wrestling career, he likely would have laughed. But four years of hard work led to a career in which McCraw qualified for the state 1A tournament as a junior and likely would have returned as a senior had it not been for an injury that prematurely ended his senior season.

“I wasn’t very good when I was a freshman,” McCraw said. “I didn’t start off amazing, but I kept working at it. I had some coaches say that if you want to wrestle in college, you can do it.

“I don’t want to say look at me, but for those younger wrestlers, this is an example for you. We’re trying to grow wrestling here, and this shows that you can definitely do this, too. It all comes down to hard work.”

For McCraw, the hard work began as a youth wrestler, and youth coaches Cheryl and Randal Baynard, whom McCraw credited along with Norman Osteen of the Strong and Courageous club for playing a key role in his development, were in the crowd for Wednesday’s signing. So was Polk County head coach Scott Taylor, whom McCraw praised “for always being there as a coach and a friend.”

Montreat head coach Jake Britt also attended. The Cavaliers, who compete in the NAIA Appalachian Athletic Conference, finished 5-11 last season, but did place second at the AAC Wrestling Tournament, the best finish in school history. The team includes a number of Western North Carolina wrestlers that McCraw has gotten to know in recent years.

“I really like their program a lot,” McCraw said. “I already have friends there and it feels just like a family. I like that family atmosphere. It’s also a small campus, and that’s one thing I like about going there.”

Freshmen dominated the Cavaliers’ 2021-22 roster, meaning McCraw will have to work hard to earn starting time on the mat. As his Polk County career showed, McCraw will bring a healthy work ethic to his time at Montreat. No better example of that can be found in that McCraw took a job working in the afterschool program at Polk County Middle School so that he would be able to help work with the middle school wrestling program once he finished his daily duties.

“It really means everything to me,” McCraw said of his signing. “Being a college wrestler is something I’ve wanted to do since I started high school. It’s always been a dream of mine.

“I finally accomplished that. Now I have four more years to keep chasing my dreams.”