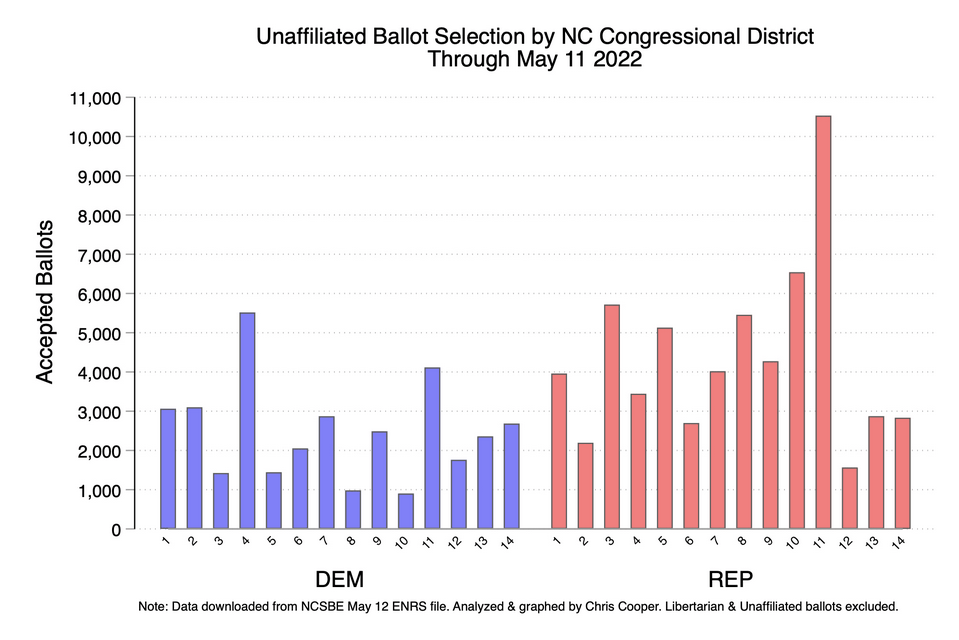 Early Voter Unaffiliated: Interest is high with early voters in the primary races in NC11, where 72 percent of Unaffiliated voters are selecting the Republican ballot.

The early voting period for the 2022 primary ends Saturday, May 14 with primary day right around the corner on Tuesday, May 17.

On Saturday, May 14, early voters can go to the one stop voting location at the Board of Elections office, 40 Courthouse St. in the Womack Administration Building in Columbus. The office will be open from 8 a.m. to 3 p.m. Voters can see a sample ballot online at polknc.gov (search Departments drop-down menu for Board of Elections).

On primary day, May 17, polls are open from 6:30 a.m. to 7:30 p.m. across the seven precincts in Polk County (listed below). The Womack Building is not a polling site.

The race to replace Senator Richard Burr is crowded, with 14 Republican challengers, 11 Democratic (including Tryon’s Chrelle Booker), and 7 Independent, Libertarian and Green Party challengers. The race is also notable for the amounts of money raised. Democrat Cheri Beasley has raked in $9.6 million, followed by Republicans Ted Budd with $4.5 million, former North Carolina governor Pat McCrory with $4.4 million and Mark Walker with $1.7 million. Budd has been endorsed by former President Trump.

The race to unseat incumbent Republican Rep. Madison Cawthorn has grown increasingly contentious from within his own party. Attack ad mailers have dropped daily from Republican aligned PACs such as Results for NC, and salacious videos and photographs were shared by former Cawthorn donors and supporters to the American Muckrakers PAC which published them online. Additionally, a barrage of news of speeding tickets, airport weapons violations, court dates, ethics complaints regarding staff salaries, insider trading allegations by Senator Tillis, an employment-related complaint filed by an ex-staffer, and the reported closings of all district offices except Hendersonville, keep his name in the headlines.