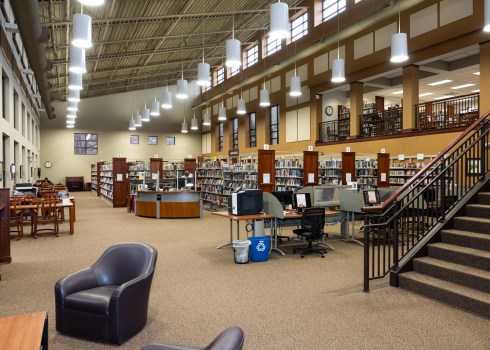 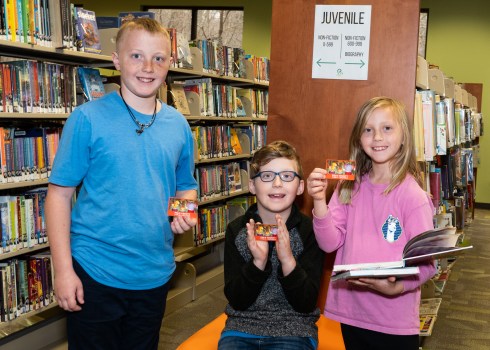 This trio of siblings from Columbus absolutely loves the library. They were thrilled to show off their own library cards! 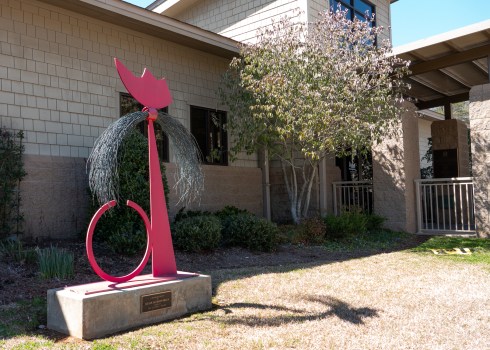 This abstract "cat" statue honors Lillian Jackson Braun, the best-selling author of The Cat Who... mysteries. Braun and her husband, Earl Bettinger, established an ongoing legacy to support the libraries in their memories. 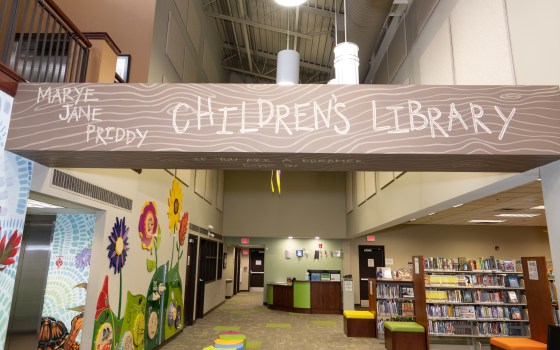 Entrance to the Marye Jane Priddy Children's Library. Ms. Priddy was a retired elementary school teacher from Connecticut who moved to Polk County. She left a major gift to the Polk County Public Libraries in her will. The Children's Library in Columbus has been named in her honor. 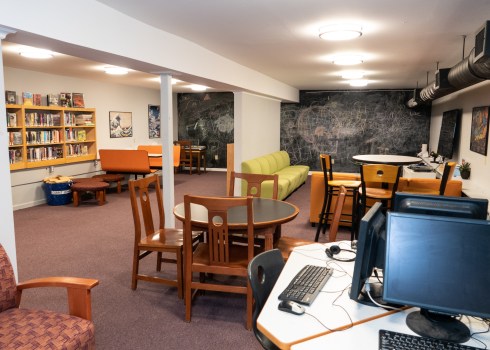 The "Teen Room" at the Saluda Library is a bustling place most every day after school, School buses make a stop there. It's common to have a dozen or more teens enjoying the space. The Library even provides snacks. 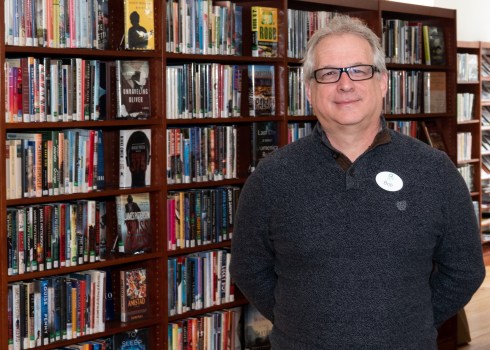 Bob McCall, Saluda Library Manager. Without the library, Saluda wouldn't be the same community at all. Not only did the residents join together to make the library a living reality, but they have also supported its continued existence for over two decades. It is a community center and a meeting place, with the bonus of providing free informational and cultural access to anyone who needs it. Every small town should aspire to have what we already have in Saluda. 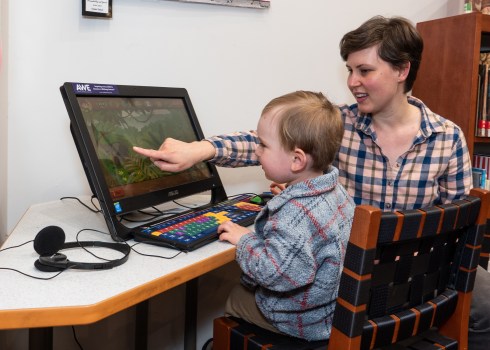 Andrew (Age 2) and mom Chrissie Gach are regular visitors to the Saluda Library. 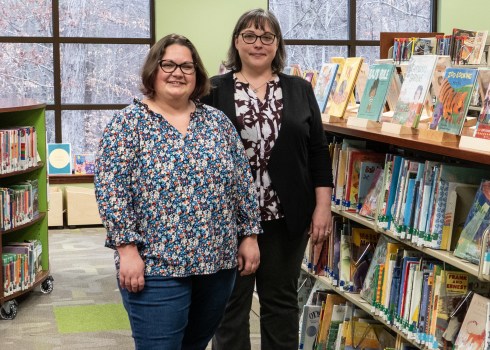 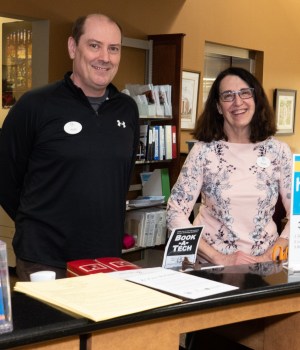 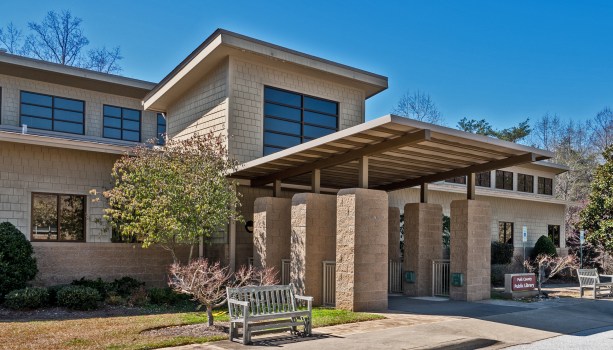 The Columbus Library was opened in 2006. Polk County has had a public library since 1960. 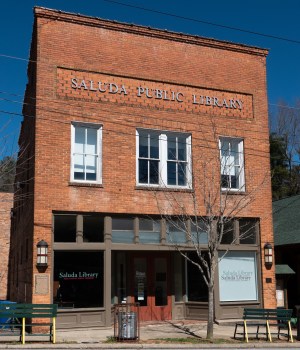 When three kids come barreling down the stairs wildly waving their own library cards, you know there is something special here. These kids were all business, and they were on a mission. They were in the Columbus branch of the Polk County Public Libraries to have fun. A load of it. And while they were at it, they were learning…more than you can imagine. The staff is quick to point out that this is not the kind of library where a staff member tries to keep patrons, of any age, quiet. They expect kids and adults to make a bit of noise while they are in this happy place.

These three siblings know a good thing when they see it. And as frequent visitors, they could be tour guides. They know every inch of the newly redesigned “Children’s Library,” and the rest of the 16,000 square feet sprawling two-story building of the Columbus Library as well.

Marcie Dowling (Library Director) and Jen Pace Dickenson (Youth Services Librarian) were pumped to tell their story. Surrounded by books, they were more than motivated to talk about the magic of the Polk County Public Libraries.

Polk County Public Libraries should be designated a local treasure. The two branches (Columbus and Saluda) average nearly 60,000 foot-traffic visits throughout the year. But that’s only part of the picture. It’s also impressive at the number of people who access library services from their homes. Over 15,000 attended 288 unique programs from their homes in the past year and total circulation was over 155,000 items.

When the pandemic first surfaced, the Polk County Public Libraries were quick to adapt to the challenges. They increased the number of programs available online, and they also offered free wi-fi for families without good Internet connections or with no Internet at all. The library kept their wi-fi on 24/7 so people could access the service from the parking lot. Even with pandemic restrictions easing and more and more users returning to the two branches, the online programming continues to grow.

If you haven’t been in a library lately, or specifically the Polk County Public Libraries…you are in for a pleasant shock. The Columbus and Saluda Libraries offer so much more than just shelves of dusty books. A library card becomes a golden ticket to all the libraries offer. And the library cards are free even if you’re from out of county or out of state. This card opens the world of enlightenment and entertainment. The library has well over 10,000 library cards in use including one for every Polk County student who wants one.

Polk County has two library branches. The main branch in Columbus was opened in 2006. The branch in downtown Saluda opened in 2000. While there isn’t a bookmobile anymore, Rita Owens, who used to drive the Bookmobile, still delivers books to homes for homebound patrons as well as local retirement homes and daycares. Jen Pace Dickenson remembers checking out books from the Bookmobile when it made its appearance in Saluda prior to the opening of their own branch.

There are a couple of “boards” that help oversee the library operations. There is a volunteer Board of Directors made up of community members appointed by the Polk County Commissioners. The Friends of the Polk County Libraries is the fundraising wing of the library. The Friends of the Libraries operate an ongoing book sale at the Columbus branch with items added each week and new deals each month. Most books and DVDs are $1 each and children’s books are only 25 cents.

It’s obvious that in this age of electronics, libraries have learned to adapt. Marcie and Jen feel certain that reading is as popular as ever, but the way people read is ever-changing. Many people want the feel of a “real” book in their hands while others love carrying a whole stack of books on an electronic device. In the end, the result is the same. Jen points out that, “We have something for everyone.” Marcie is quick to agree and adds, “We might surprise you with what we have to offer.”

Being surprised at what the libraries offer is an understatement. Totally amazing would be more fitting. We are fortunate to have such an incredible public resource with truly something for everyone.

Some of What the Polk County Public Libraries Offer

Some of the digital resources include:

The Columbus Library is located at 1289 West Mills Street sharing the same campus as the Polk County location of Isothermal Community College. 828/ 894-8721.

Hours for each branch and information on accessing both on-site and digital resources can be found at: www.polklibrary.org.