Artist rendering of the front of the new market, complete with iconic quilt squares that Landrum has become known for. 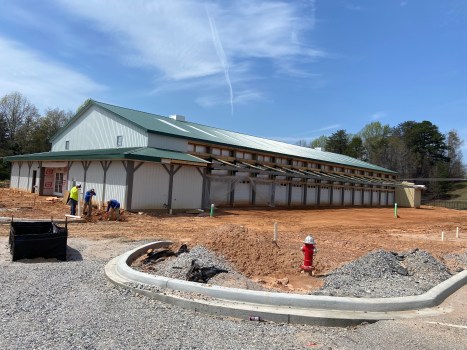 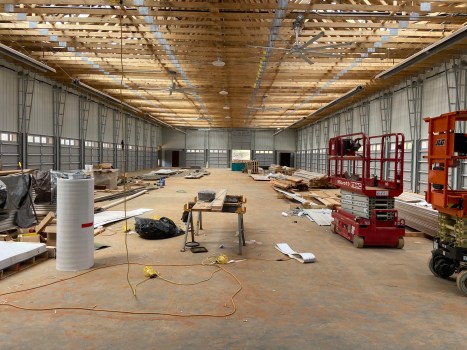 An interior view of the building shows 15 bays along each length of the building. Inside, each farmer will have a 10-foot by 10-foot space to set up tables to display and sell goods. 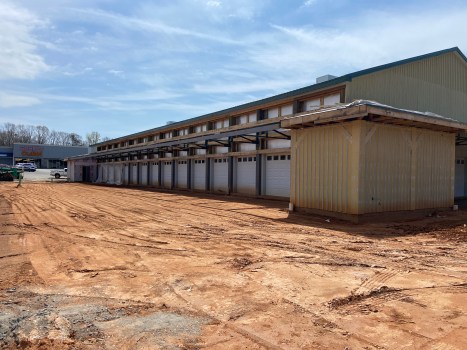 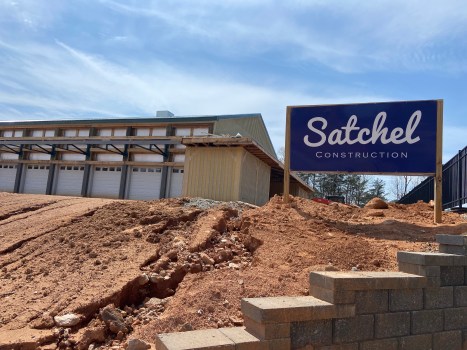 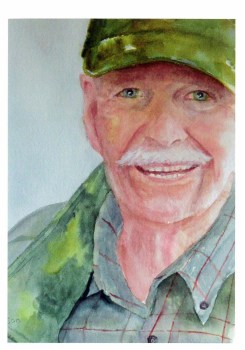 Joe Cunningham will forever be admired as the man who, over the last 20 years, has made the Landrum Farmers Market one of the best in the region for the people of the area to sell their products -- produce, meats, eggs, flowers, plants, etc. 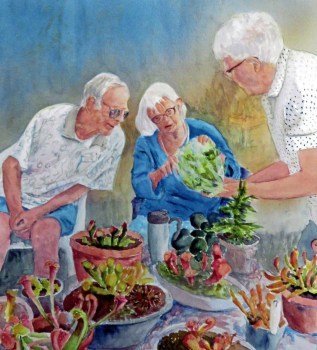 Alice Stroup Jackson started painting watercolors in the spring of 2020 to honor the people of the Landrum Farmers Market. She collected a fee from the vendors each week and this gave her the opportunity to get to know them better. The paintings completed in 2020 depict typical actions of the market vendors and their personalities.

For many years, the Saturday morning hunt for heirloom tomatoes, mountain corn, and canning cucumbers at the Landrum Farmers Market could be a little tricky. If it was raining, you got wet, trying to maneuver along the shady curb on Trade Street. Even on nice days, the lay of the land was narrow, sloping, and filled with above-ground tree roots that made walking from tailgate to tailgate an adventure in staying afoot, especially when toting a watermelon, a peck of peaches, or a tray of seedlings for your own garden.

You can still find some of the best locally grown produce in Landrum on Saturday mornings, but the farmers market is now just around the corner in a big building in the parking lot shared by Dollar Tree, Burke’s Outlet, and Savvy Scavengers. The official name is now “Landrum Pavilion at Market Square,” although for some, it will always just be the “Landrum Farmers Market.”

“It’s big, it’s beautiful, and it will be the place to be on Saturdays starting May 7th,” the market’s volunteer Manager Lisa Gunter said. “Come shop our market, then walk downtown Landrum to the many great shops and restaurants,” she said and added: “#LoveLandrum.” Yes, even farmers markets have Facebook pages and hashtags.

Instead of the tree-lined curb that parallels the railroad tracks, the new market is a 15,000-square-foot enclosure that reminds us of the glory days of peach sheds in Spartanburg. It was designed in 2019 by architect Doug Hurlbert, who many people will identify as the guy who plays the concertina at the farmers market. “I think that I’ve been playing there for five or six years now,” Doug said. “I plan to continue to play there as long as I am able. Those people are all my friends.

“The design is based on the peach sheds that used to dot the rural Upstate landscape but are now fast disappearing,” he continued. “The project has been a positive experience for everyone involved!  We all hated to leave our previous location in the grass along the railroad tracks, but we had outgrown that. Hopefully, the new building will capture the spirit and energy of the previous location and allow even more people to become involved. This project fits in perfectly with the attitude that people associate with Landrum: a small town where quilts, horses, and the train depot are forever respected and admired.” As is expected, the building will bear at least one of the iconic quilt patterns that Landrum has used to visually brand itself.

Now, instead of jockeying for the limited parking along Trade Street, shoppers have plenty of parking spaces in the new location. From the outside, it is easy to gauge how many farmers have set up their wares. They just back up their trucks and cars to one of the 30 garage-like doors. There are 15 bays on each longside of the building. Inside, each farmer has a 10-foot by 10-foot space to set up tables and such for displaying. To participate, the farmers pay $10 per day, which is up $8 from the $2 they paid on Trade Street.

Once inside, the patrons find themselves looking at two rows of tailgates along the sides of the expanse and as many as an additional 24 vendor spaces in the center aisle — with plenty of room to browse, haggle, and buy not only fresh food but canned produce, arts and crafts, plants, and whatever else that fits the environment. Overhead are large ceiling fans, moving the summer’s heat through the building and in the open rafters.

“I am very excited about the new market facility, and it’s going to be a great addition to our community,” Lisa said as late as April 1, when the Pavilion and surrounding grounds were still under construction but with a goal to be ready by May 7.  “The Landrum Farmers Market has a long history and has continued to grow year after year.  It’s good to know that city officials recognize the economic contribution this type of permanent facility can make to our area.”

Giving credit where it is due, Lisa said: “I am trying to fill the shoes of the man who made this market happen — Joe Cunningham.  It was his vision and desire over 20 years ago to give the people in the Landrum area a place to sell their products — produce, meats, eggs, flowers, plants, etc.  It started at the old train depot and then moved to the trees on Trade Street for more space.  I was asked to co-manage in 2021 as Joe needed to cut back some, but he still managed to come almost every Saturday! My background is 38 years in agriculture lending.  I was Chief Financial Officer of AgSouth Farm Credit when I retired in April 2018.  I just want to do something to support ag in our community and this is one way to do it.”

Undoubtedly, Joe will forever be admired as the man who made the Landrum farmers market one of the best in the region. Even though his health made it difficult at times for him to maneuver the rough terrain of the Trade Street location, he was always there on Saturday mornings to support both sellers and buyers. A man of few words, he has given the new market its ultimate endorsement: his blessing.

Construction of the $1.9 million Landrum Pavilion at Market Square started in 2021 by the Charleston-based Satchel Construction company. Now owned by the City of Landrum, it was paid for through the City Hospitality Fund, which traditionally is funded by taxes collected from local restaurants. Joe spearheaded the effort that was overseen by an advisory committee made up of City Administrator Rich Caplan, Shannon Dotson, Doug Hurlbert, Lisa Gunter, Mary-Beth Noble, Joyce Davis, Brandon Higgins, Buddy Williams, Alisa Mosley, Calem Upton, Deb Hoeberling, and Linda List.

“This new structure will be a multi-use facility for city events, concerts, community gatherings, reunions, and more,” said the city’s Public Relations/Marketing Director Tricia Taber. She explained that some of the thinking behind creating such a grand farmers market was to have a large multi-purpose community center that will draw visitors from near and far and boost economic activity in the downtown shopping district. “The new pavilion is expected to draw visitors from across the Carolinas,” she said, and added: “In order to provide better access to the market from downtown, a new pedestrian friendly crossing will be constructed.”

Echoing Tricia’s optimism, Landrum Mayor Bob Briggs said: “The new Farmers Market will be a great asset to Landrum. The idea was born out of a need for more space at Landrum’s Farmers Market as it has become a Mecca for farmers and their produce.  The great thing about the Landrum Pavilion is its ability to meet many needs as a venue for weddings or car shows or craft festivals or music events. It’s truly a multipurpose facility.”

Everyone is invited to the Pavilion’s grand opening on Saturday, May 14, at 6:30 p.m. The celebration will include a ribbon-cutting ceremony, T-shirt giveaways, food, music, and fun for the entire family. A free community concert performed by the bluegrass band Dirty Grass Soul will begin at 7 p.m. If you need a GPS to get there, the address is 221 W. Rutherford Rd.