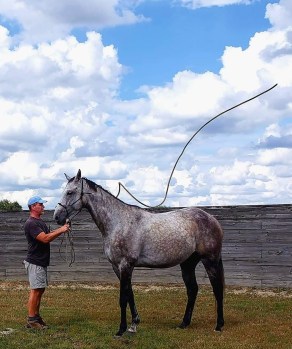 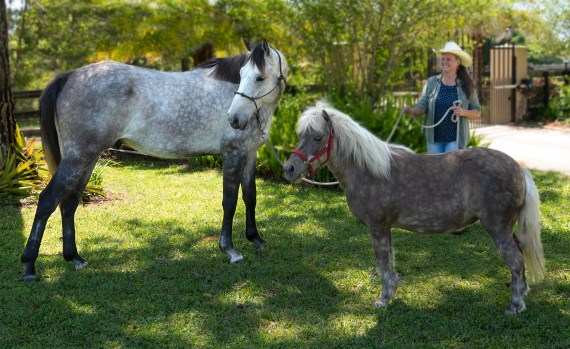 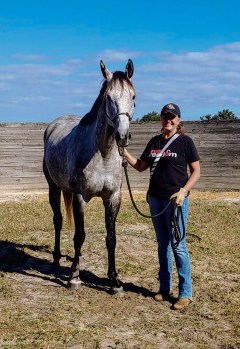 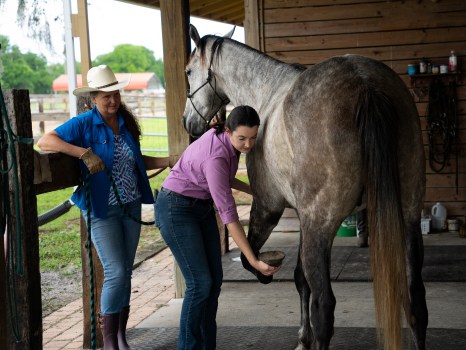 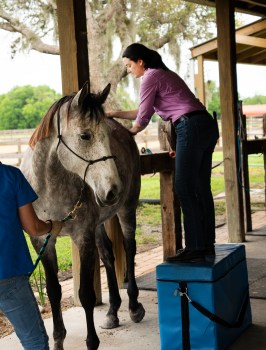 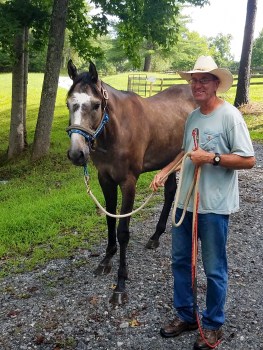 Columbus N.C. horse trainer Rick Millweard, with Priceless, preparing to load for his journey to adoption in Ohio.

Some small words have different meanings. Let us examine the adjective “priceless.” To be priceless is to have a value beyond price (invaluable); to be costly because of the rarity and quality (precious); and to be priceless is also to be delightfully amusing, odd or even absurd. When we picked the name Priceless for the tall, dark and handsome gray gelding we saved from one of the worst places on earth, we truly hit the nail on the head.

Now, I am, of course, priceless and could never be replaced no matter how hard my mistress of HERD, Heather Freeman, tried. Consider me the Hope Diamond of ponies. Yes, that 45.52-carat diamond extracted in the 17th century from a mine in Guntur, India worth over $200 million, with its blue coloring has nothing on me. You can visit it in Washington, D.C. at the National Museum of Natural History. I am in a private collection by appointment only!  This refined head, rare chocolate palomino coloring, and beguiling ways … well, let us just say that everyone who meets me finds me beyond comparison. Enough about me. You get the picture that I set a high benchmark.

The big gray Priceless, he is in a whole different league. In December 2017, we saw a video of him at age two. He was 16.1 hands, and resisted being led around in a shipping pen in Bastrop, Louisiana, to be shipped to go to slaughter. We all agreed to take a chance on him. He was thin, he was young, and he had presence. Our rescue partner friend in Louisiana, Christy Petrus, drove to the lot and picked him up for us. He would stay at her private farm for over a month until he was leading better and could be loaded properly in a horse trailer to make the journey to North Carolina. This would be a pleasant trip for him riding safely in a box stall. She reported he was shy, a tad difficult to catch, and getting a halter on his head was no easy task. Priceless did not enjoy the human touch at this phase of his life.

Once Priceless landed with us in the Tryon area, he stayed on a few farms in Columbus and Campobello that offered to foster him. He was an aloof, well-behaved “horse guest” at both places. A spot finally opened for him at Kim and Christian Oliver’s Edge Brewing Rescue Barn for HERD horses and we gladly moved him closer to us for daily care. His pasture mates were the golden palomino, Oro, and the chestnut colt raised in our rescue, Bob.

Heather and helper, Charlie Petty, made great progress with the towering horse. Equestrian and actress, Pam Stone, came to visit Priceless as she pondered adopting him as a project horse to develop. His movement was lovely trotting freely out in the pasture. His size, which was now a full 17.1 hands, made him impressive to behold. She decided he was just too young for her.

In 2019, a woman who had experience training young warmbloods and thoroughbreds and who followed HERD on Facebook inquired about adopting Priceless. She was in Ohio, with a nice farm which had an indoor ring, pastures and nice stables. It sounded like a great next step for this amusing horse. Training volunteer Rick Millweard came to help load Priceless for his journey to his new home. Priceless was now much more comfortable with leading, loading and being groomed and handled. Off he went to Ohio.

Monthly updates kept us informed that he was in good health and had lots of horse friends and a doting owner. However, two years later the reporting stopped. Heather got word that the owner could not get Priceless started under saddle and she had given up on him and wanted him to come back to HERD.

Upon arrival Priceless looked like a different horse. He had lost weight. He looked so defeated as he unloaded off the trailer in North Carolina. For a few months, Priceless successfully got started again with groundwork and under saddle training. The trainer could ride him, but picking up his feet, and being consistent about being caught, were not in this horse’s wheelhouse now. The decision was made to have him rejoin us at Heather’s ranch to start him all over again.

Priceless is by far the largest investment HERD has undertaken in transforming a rescue horse. This precious cargo is seriously heavy lifting. He is regal in the looks department. His movement is exceptional and when he relaxes and accepts affection, he is stellar. Kathy Milroy has been making steady progress under the tutelage of Scott Homstead, who is a natural horseman. Scott has helped us transform so many of the unhandled and more challenging equines we save since HERD was founded.

Board certified bodywork and massage therapist Wes Maillard has given Priceless two treatments, looking for any troubling spots that might impact his progress. He could not pinpoint any issue. Trainer Rick Millweard recently came to see his towering young friend and was impressed with Priceless’ excellent condition and overall development.

The next gift to help us understand Priceless was a reading by the famous horse trainer, author, and animal communicator, Anna Twinney. She revealed that Priceless has something out of alignment in his right hip area that requires an adjustment by a chiropractor. He twisted his hind end at some point in his young life and although he trots and canters soundly, it is the lifting of his hind legs, above his front fetlock height, which causes him discomfort. A rider aggravates the issue. We are hoping this issue can be resolved so he can find his ideal home.

Priceless has the potential to be a treasured partner for one lucky equestrian. We are optimistic that he will live up to his name and be that one-in-a million exceptional steed, one that is rare, beyond compare and priceless.