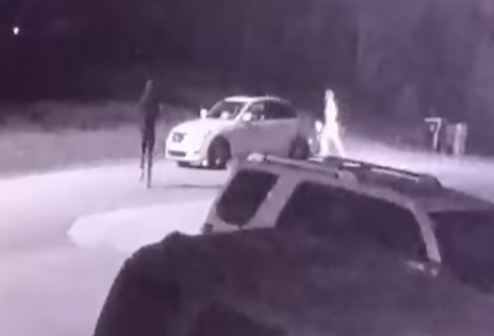 Surveillance shows the suspects at a recent burglary.

LANDRUM––Beginning early in the morning of April 23, Landrum and Campobello police have gotten more than 12 reports of vehicle break-ins.

The larcenies occurred on Redland Road at 5 different addresses, and a vehicle burglary even took place on the property of a Campobello law enforcement officer. More vehicle burglaries occurred in other cities and areas of Spartanburg County.

In some of these incidents, residents have surveillance footage from their homes in the Landrum and Campobello area of the two suspects under investigation.

Police request that residents on those streets check their security cameras, if they have them, for suspicious activity.

Video surveillance shows the suspects might be driving a white car, and that they are rushing in and out during the burglaries. Surveillance also reveals that there is a driver and two males involved in the burglaries.

If you have any information about this vehicle or suspects, please contact Landrum Police Department at 864-457-7281 or Spartanburg County Sheriff’s Office at 864-503-4500.