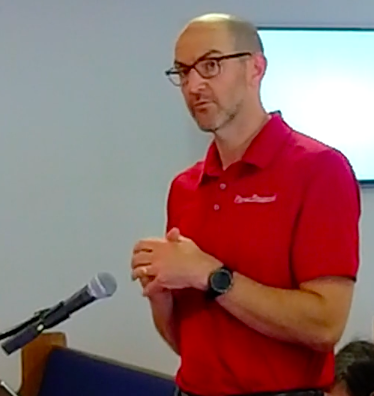 Polk County residents are interested in a proposed new YMCA, and they’re ready with their checkbooks to support it.

This finding was presented to the Polk County Board of Commissioners Monday night by Michael Baughman, YMCA Development Committee chairman, and LaTisha Steele, consultant with Decker Steele and Associates, after the committee reviewed just over 3,000 survey responses received from residents.

The survey was developed to enable the committee to gauge community demographics, residents’ wishes for a facility, and the community’s ability to financially get the facility off the ground and sustain it into the future.

“That 50/50 split is good,” according to Steele, who added that “the more people wanting to join as a family unit, the more sustained the facility will be over time.”

Additionally, Steele says, the number of households with two adults, 67 percent, is “way above average,” and is a positive indicator for a facility being financially sustainable.

Regarding the empty nesters, Steele said, “this facility would be built for the second half of a person’s life, and is still sustainable for that age group.”

Wishes for the facility

An indoor pool tops the facility wish list, with 84 percent in favor. Rounding out the list were fitness classes (Zumba, kickboxing, indoor cycling, yoga), fitness center (with cardio and strength equipment), a gym for basketball, volleyball, and pickleball (for adults and youth), an indoor walking and running track, and a childcare area.

What do respondents want to do in the indoor pool? Water aerobics, lap swimming and family swimming topped the list, followed by swimming lessons for youth and adults.

“The older population wants water aerobics,” Steele said, adding that she was shocked to see how far people drove out of the county to attend water aerobics classes. “Older adults want aquatic therapy in a warmer environment.”

The committee drilled down on the types of group fitness classes respondents wanted to access and found that yoga, strength training (body weight, weightlifting, cross training), aerobics (step, high intensity training, dance cardio), cycling or spin classes, and Zumba were the most popular.

The committee found an overwhelming number of respondents (2,470 out of 3,084) who indicated they would be likely to join the YMCA.

They found 1,184 people would be willing to financially support the building of a YMCA with a donation. The committee has a list of 800 plus names, contacts and emails of those ready to support the project, according to Baughman, who adds that the committee’s fundraising task force is getting organized to figure out how to engage that list.

“From what I’m hearing, for a community this size to have this amount of folks willing to support it with a donation is a big deal,” he said.

Steele echoed his comments. “It’s phenomenal. Some people are responding with the donation amount they’re ready to give.”

“We have no formal recommendation at this point,” said Baughman. “We started this process by trying to answer the question, ‘Can we sustain it in this community?’ We’re hearing from survey data that we’ve got enough interest from people willing to pay ongoing membership that we can sustain a YMCA community center here as long as it’s not burdened with a big debt load.”

“We’re not hearing or seeing anything that tells us we can’t do this here,” he added. “There is a lot of positivity and support. We’ve got outside experts confirming that. We’ve got more support than we thought.”

The committee has not explored construction costs and size yet, but according to Baughman, there is a fundraising task force getting organized, and the committee is working on getting clarity on location and size of the facility.