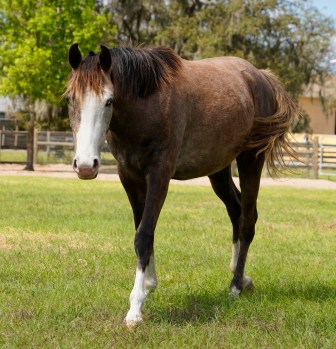 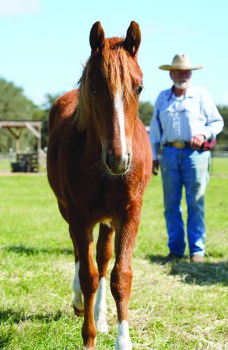 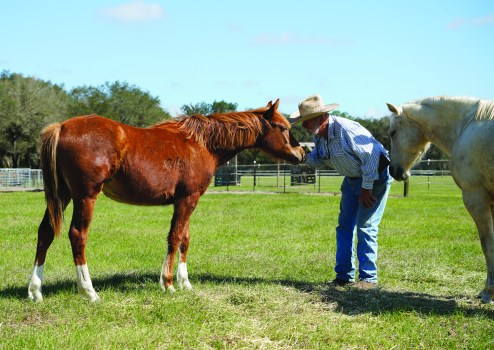 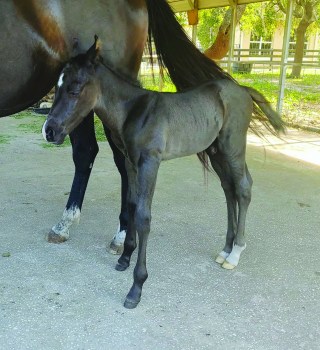 MIng 6 the day he was born in HERD

Weaning, the act of separating a mother from her baby, is a stressful time. Especially for young equines under the protection of their devoted moms. There are two ways to go about this process with horses, gradually or abruptly. This spring we experienced both methods. Each was a tad tearful. I had the assignment of babysitting the first mare, Navajo, over the fence, during her weaning ordeal. It took a week of her pacing our shared property line, until she calmed down, resolved that her foal was not returning to her side. Today, I am currently watching over the pretty buckskin mare, Mist, as she pines the separation from her baby, Bambi.

Two foals, the handsome colt Ming 6, and stunning little filly, Bambi, are so like me – postcard ready in the looks department. Both horses have perfect builds and soulful, soft eyes. Ming was born here in our rescue, Helping Equines Gain Dignity, (HERD). Volunteer Bill McClelland entered mare Navajo’s paddock to deliver her breakfast, and alas there were eight legs visible in the shed, not the typical four. Just like his beautiful mother, Ming is jet black with hind socks and a perfectly formed number 6 in the middle of his delicate head, complementing the white snip on his nose.

Unlike other young mares who have raised their foals with us, Navajo did not welcome us around her newborn. This was her second colt. Her first had been taken from her at age four months and sold separately at the livestock auction. This trauma had been devastating for her. He was pulled from her side by a lasso rope around his neck.

Six months is the commonly recommended age for weaning a horse, as foals can eat on their own at this age and are further along in proper stages of development. At this turning point, mother’s milk must be supplemented with more feed to substance the growing equine.

Now that Navajo had birthed a new companion, she was not about to let any of us near Ming. She pinned her ears in warning and came charging at us when we walked into her pasture to remove the afterbirth. This practice is important to ward off predators from entering their domain. We also had to be sure the birthing sack was intact, so the mare was not harboring anything that could cause an infection. Navajo was so fierce that it was all Bill could do to fend off the anxious mare and collect the placenta to remove it.

With each day, Navajo greeted us with utter contempt for entering her realm and disturbing her motherhood.  Although she softened over time, the mare made the task of imprinting with Ming next to impossible for us. Luckily, he was healthy and curious. Ming took every opportunity he could to come smell Bill’s hands and ask for a back scratch over the fence until his mother intervened. There is no better, more protective mother than Navajo. She endured Ming’s playful antics of jumping on her back. The two galloped around their field in joyous play. Navajo prevailed in the sizzling summer sun for hours as Ming always decided to nap in the unsheltered west corner of his pasture. Of course, she provided the shade to keep him comfortable. No doubt about it, she earned a score of 10 on the motherhood scale of perfection.

When it came time to wean Ming from Navajo, we decided a quick abrupt approach was going to be the best for all parties, including the safety of our volunteer helpers. We gave this mare and foal a full seven months together, but it was time to make the move. After eating breakfast, Navajo was confined to her feeding station. A halter was placed on her head, and we led her out the gate through the front of the feeding pen, leaving Ming behind in the pasture. While Navajo was guided across the farm to the field next to me, young gelding Polaris was taken into Ming’s pasture.

We picked Polaris for his gentle, friendly nature. At age two, he was not too formidable for a confident Ming. He was rescued as a yearling as part of a neglect case. His growth was stunted from poor nutrition, but in HERD, he is blossoming and growing into a handsome young horse. Polaris’ most striking features are his eyes, which are half blue and half brown, and his blaze and tall white stockings, which contrast his dark gray coat. While gentle with Ming, Polaris was quick to establish the rules in the paddock of who gets to take the first feed bucket, and the best spot in the shade of the oak trees. Not as tolerant as Navajo, this is just what Ming needed at this stage of his adolescence.

With Ming in good standing, now it was time for Mist to say goodbye to Bambi, her chestnut-colored baby, with plenty of chrome. In this case, Mist had always been tolerant of us having contact with Bambi. So, we separated them over a matter of days within the same pasture, using a round pen paddock to contain Mist. Next, Mist was haltered and led to a small paddock with a shelter just across from my pasture.

Bambi was alone for only a minute before she received a young palomino mare, Liberty, as her new pasture mate. This was an instant success. The two fillies became friends quickly, galloping around the field and sharing a flake of alfalfa hay. Bambi only demonstrated her concern, with heartfelt cries seeking her mother, during the first hour of the new living arrangement. Mist on the other hand took the separation harder, pacing and only nibbling at her feed for 48 hours.

As an observer, I have to say that it is the mothers that have the harder time letting go, no matter if the separation is abrupt or gradual. In HERD, these are the nail-biting steps we endured for springtime weaning 2022.