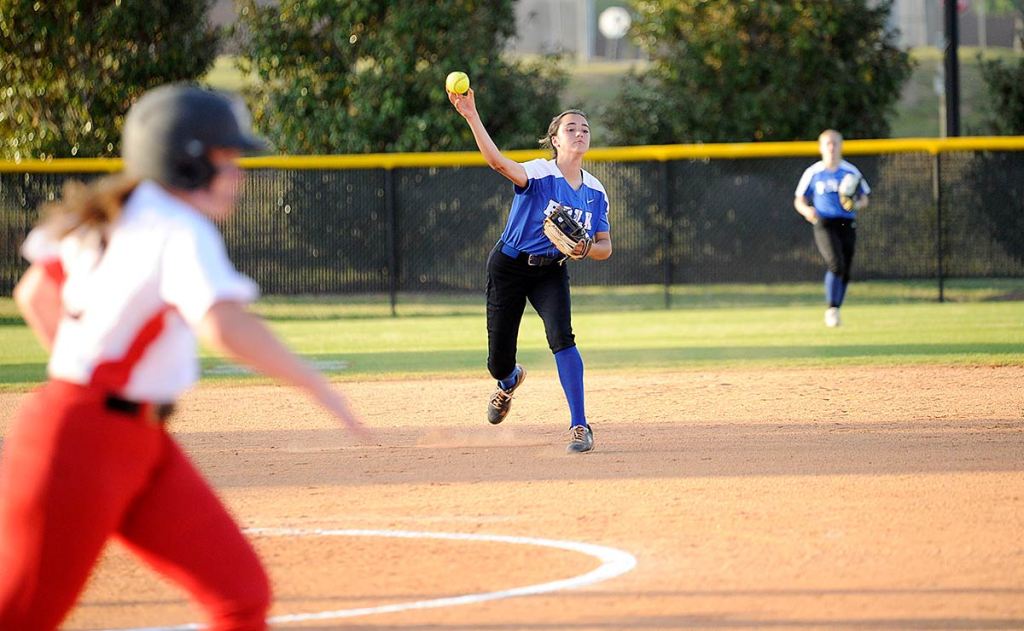 Finally, Polk County fought from behind for a victory.

They obviously ought to keep the series going – the two teams do meet again next Monday at Polk – because Monday’s meeting delivered just a bit of everything imaginable. The best answer to “what happened” was “well, what didn’t?”

Two home runs, one of those bouncing off the top of the fence

Two runners thrown out at home, one of those the potential game-winning run

Drama, this one didn’t lack.

“That’s the first time we’ve come back for a win,” said Polk County (8-8) head coach Phillip Miller. “We showed a lot of life and learned a lot. Hopefully we can carry this over and get a conference win.”

Arrowood delivered her game-winner to cap a frenetic top of the eighth. Chloe Young walked to open the inning, and Sarah Vitale followed with what looked to be a certain base hit, only to see Landrum shortstop Abby Hammer dive to her left, stop the grounder and flip to second to just force out Young.

But Vitale took advantage of two wild pitches to motor around to third, and after Elizabeth Vitale drew a walk, Arrowood ripped a line drive up the middle for the go-ahead run.

Those heroics wouldn’t have been possible, though, without an equally impressive effort in the bottom of the seventh. With the teams tied at 5-5, Hammer opened the seventh with a single, stole second and advanced again on Katelyn Brown’s sacrifice bunt, putting the winning run on third with one out.

Ally Gosnell followed with a hard-hit grounder that Polk freshman shortshop Mia Bradley calmly backhanded and threw a strike home to Elizabeth Vitale, who tagged Hammer just before she slid across the plate.

Sarah Vitale then notched a strikeout to end the inning and set the Cardinals (3-8) down in order in the bottom of the eighth.

“Mia Bradley made a tremendous play in the seventh to keep the game tied,” Miller said. “It was also great to see Sarah Vitale get her first home run. She got that monkey off her back.”

Vitale’s homer in the fourth clanged off the top of the fence and cut Landrum’s lead at the time to 4-1. Polk then grabbed the lead with a four-run rally in the fifth.

Arrowood reached on a bunt single to open the frame, with Kayleigh Wilson lacing a line-drive double into right-center that scored Arrowood. Ada Kelley was hit by a pitch and Laney Littlefield reached on a fielder’s choice, with Wilson out at third, before a Bradley single scored pinch-runner Miya Jackson.

Both runners moved up a base during that play, and both scored on Amberlyn Scruggs’ single to center, giving Polk a 5-4 edge.

Landrum took advantage of two Wolverine errors in the bottom of the fifth to score the tying run and set the stage for the late-inning theatrics.

The game’s chaos began from the outset. Polk’s first two runners reached base before Young lifted a fly ball into shallow left field. The ball was dropped, though, setting off a wild series of events in which all three Wolverine runners were eventually forced or tagged out, giving the Cards the most unusual of triple plays.

Sydney Price then opened the bottom of the first with a home run down the left-field line, and the Cardinals took advantage of two Polk errors to score another run for a quick 2-0 lead.

Landrum added two more runs in the third to up the lead to 4-0.

Scruggs and Arrowood each finished 2-for-3, with Bradley 2-for-4 for Polk. Young, Wilson and Sarah Vitale each added base hits.

Sarah Vitale struck out seven and allowed six hits in the win.

Polk next has a pair of conference games with East Rutherford, hosting the Cavaliers on Tuesday before traveling to Bostic on Friday.