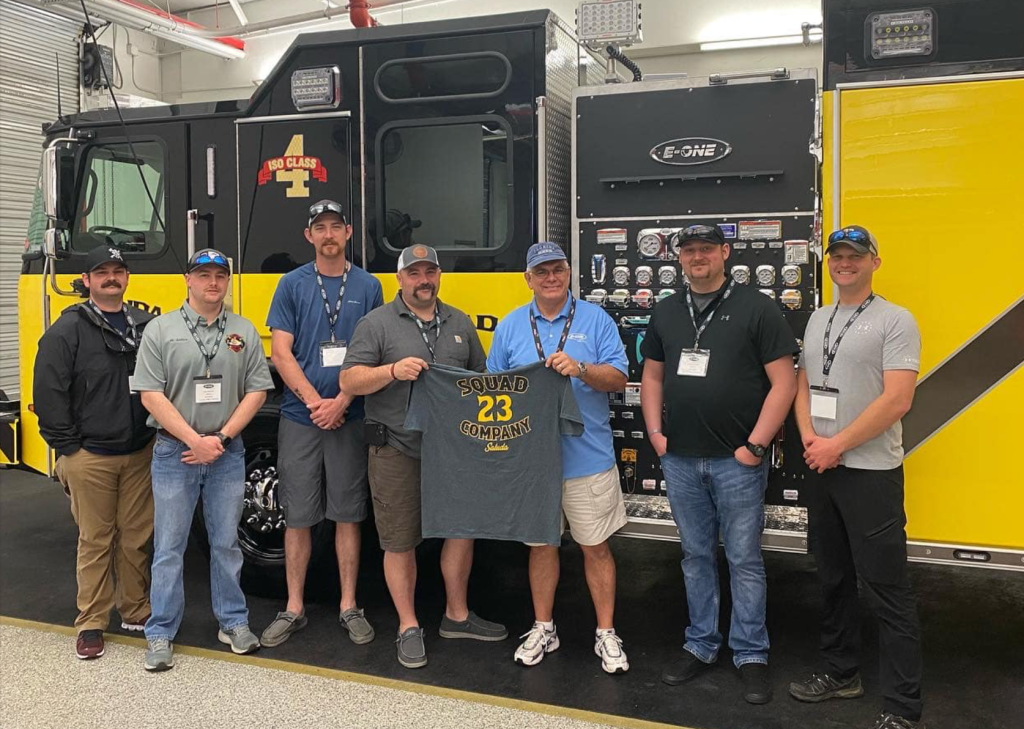 The team standing in front of their new Squad 23 engine in Florida. The engine is expected to arrive in Saluda sometime this week. (Photos courtesy of Saluda Fire and Rescue Facebook page.)

“Squad 23” truck can handle any type of emergency

SALUDA––Saluda Fire and Rescue has a new addition to their engine family. They’re calling it “Squad 23,” their new multi-purpose rescue vehicle.
Chief Robert Dillinger says the process for getting this new engine began about two years ago.
Over two years, the truck was custom designed and built from bottom up, however, the Covid-19 pandemic slowed down some of the process with the supply chain.
Last week, six members of the apparatus committee drove down to Florida, where the engine had been ordered from E-ONE, and they did a final inspection on the truck.
The Squad 23 engine should be in Saluda sometime this week, according to Chief Dillinger, and it should be serviced within a month to get the radios and other essentials installed.
The new engine will serve as a rescue vehicle for medical, fire, and water emergencies.
Chief Dillinger says that with their call volume increasing, overlapping calls became an issue. Now, if Saluda Fire and Rescue is out on a call, they won’t have to run back to the station to switch engines, as the new one will be capable of aiding in most emergencies. The new engine will also take the load off some of Saluda Fire and Rescue’s other trucks.
Last year, Saluda Fire and Rescue was awarded the AFD (Assistance to Fire Fighters) grant through FEMA (Federal Emergency Management Agency), which covered the cost of the hoses, water nozzles, and extraction tools on the new engine.

“Everything on this truck is battery powered and has the best equipment we could attain,” Chief Dillinger says.

Including Squad 23, the station will have nine trucks.
This month, Saluda Fire and Rescue also received another grant from Firehouse Subs for a utility vehicle they will be getting soon.