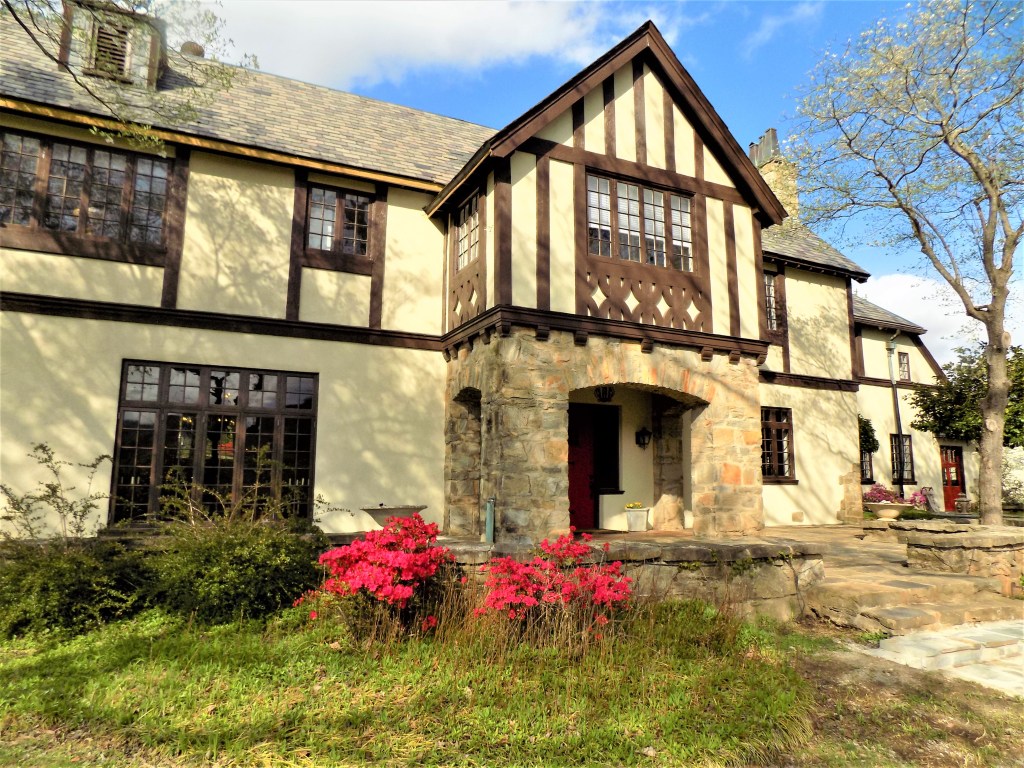 Friendly Hills was for sale.

“I didn’t even know about Tryon,” said Casavant, who lived in Wilmington then. “I was attracted to the 1920s Tudor style and purchased it immediately. Of course, I love Tryon now.”

Friendly Hills was built in 1924 in the then-popular Tudor Revival style. Another fine example is the Dunwyck Estate in Columbus. Friendly Hills is best known locally as the home of author Margaret Culkin Banning, who bought it in 1936 and lived there seasonally until her death in 1982.

Casavant has made it his home, although it has been a work in progress.

“Purchasing it was just the admission ticket,” he said, noting he has spent more money on improvements than he did to acquire it.

Casavant is a developer and a board member of Preservation North Carolina, a private organization that promotes and protects historic properties, saving many from the wrecker’s ball through purchase and rehabilitation. So, he approaches the task of restoration with fidelity to the era of the home’s construction. This means refurnishing with period pieces, repainting in original colors and even installing new appliances disguised in period style.

He’s raised ceilings, lowered floors and moved windows to create more natural light and the appearance of greater interior space. Oak beams, rock fireplaces and a mantel carved by the Tryon Toymakers in the 1920s add a majestic aura to the 4,500-square-foot house. Soft leather armchairs invite visitors to sit in utter comfort while gazing at mountain scenes painted by local artists.

Yet, the real artistry is outside. The hilltop property on Country Club Drive affords spectacular vistas in nearly all directions. The estate is just a mile from the center of town yet in the midst of the mountains. “It’s so accessible, but you have great views,” Casavant said. “I love that about the place.”

A good spot to take in the scenery is by the swimming pool in back of the house – not to be confused with the koi pond elsewhere on the 17-acre property. Nor is the main house the only accommodation. The site also includes the small log cabin where Banning wrote some of her 36 novels and three guest houses.

This is good news for the local hospitality industry. Casavant is preparing the guest houses as short-term rentals. One features a large game room, with billiards, table tennis, foosball and other entertainments, and a one-bedroom apartment upstairs.

He’s also in the process of adding approximately 3,000 plants to the grounds, “to get it looking like the mountains, like it used to look. We’ve planted several hundred already,” he said. New exterior walkways and a circular driveway are planned.

Banning, a native of Minnesota who spent most summers there, was well-liked in Tryon. She hosted notable visitors, from Arctic explorers to statesmen and diplomats, who offered free lectures in town. She raised money for worthy causes. She even served as a judge for the Tryon dog show along with F. Scott Fitzgerald in 1937.

Casavant is hospitable as well. He hosts regular card parties – Hand and Foot is his game – and occasional wine-tastings. He generously offered a tour to this writer and his wife.

“They say Tryon is the friendliest town in the South,” he observed. “There are a lot of nice people here.”  He also appreciates the impressive amenities for such a small town. “Tryon punches above its weight class.”

Part of that is Tryon’s history as a community where art, literature, music, craftsmanship and architecture have always been highly valued. Casavant appreciates that tradition.

“There are a lot of great houses here in Tryon,” he said. “It’s nice to see them restored.”

“Allan has a reputation across our region as being creative and detail-oriented, and it’s always interesting to see what captures his attention and imagination,” Briggs said. “If he selects a community for a project of investment, I think it’s a great form of validation. His work in historic preservation builds on his sense of quality and sustainability and he appreciates the old adage ‘they don’t make them like they used to!’”

This kind of restoration requires long-term commitment and investment. Casavant said he’s received generous offers for Friendly Hills since he purchased the estate, but he’d rather keep the house in his family for generations. His son, A.J. for Allan Jr., who lives in Mount Pleasant, S.C., loves it, Casavant said.

For now, it’s important to Casavant to make sure that Friendly Hills, nearing 100 years old, remains a Tryon treasure as it enters its next century. Margaret Culkin Banning couldn’t write a better ending herself.

Doug Clark is a retired journalist who lives in Tryon.