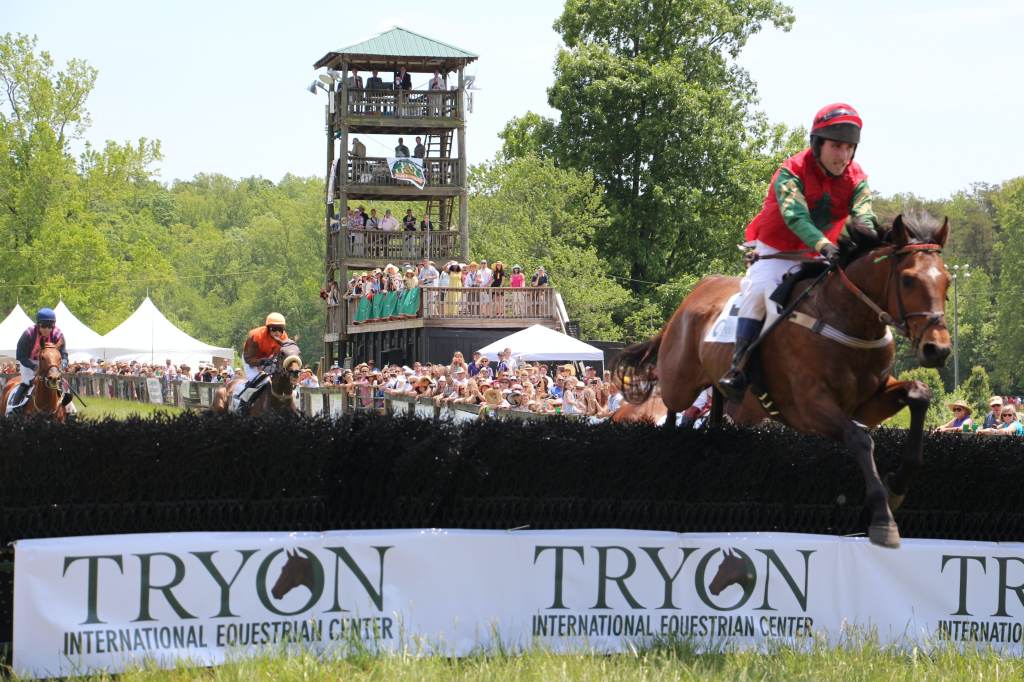 Grab your cooler, put on your crazy pants, don your fancy hat, load up your car with friends and family, and come on out this Saturday, April 16 for a day at the races!

Gates open at 10 a.m. at Tryon International Equestrian Center’s Green Creek race course at 6881 NC Hwy. 9 South for the 74th Tryon Block House Races — the historic steeplechase of the Tryon Riding & Hunt Club. Admission is by the carload. Children 12 and under are free.

Before the races get started there will be an Easter Egg Hunt at 11 a.m., contests for hats and crazy pants at 12 p.m., opening ceremonies at 12:15 p.m., and a magic show at 12:30 p.m. At the Infield Kids Zone from 11 a.m. to 1 p.m. there will be face painting, a balloon artist, carriage rides, a caricature artist, pony rides, corn hole competition, hobby horse jumping, and relay games. There will be food trucks and a beer garden, and as always, visitors are welcome to bring their fancy tailgate spreads.

The first race starts at 1 p.m. and runs on a fully irrigated, recently updated, A-rated, 1.16-mile course for the highest quality experience for the jockeys and horses alike. A total of five races are run on 30-minute intervals.

Tailgate spots are available on the rail (assigned) or in the infield (unassigned), with free admission for children. Tailgate spots will be sold by vehicle including up to six passengers, with additional passenger tickets available. Call the Box Office at 828-278-8088 or visit Tryon.com/steeplechase for more information and tickets.

Steeplechasing began in Ireland when some foxhunters dared each other to race to the nearest church steeple. Since then, “steeplechasing” as it came to be called, has become popular in Great Britain and the United States. Started by Carter P. Brown, the first steeplechase in western North Carolina—a single race with a tin cup as the prize for the winner—was held in 1946 at Harmon Field in Tryon.

Eventually Brown built a racecourse around what had been an old tavern called the Block House, which gives the steeplechase its name. The course went from North Carolina into South Carolina several times and included a daring ride up Heartbreak Hill. Officials used flags to let the jockeys know how many times they had been around the track.