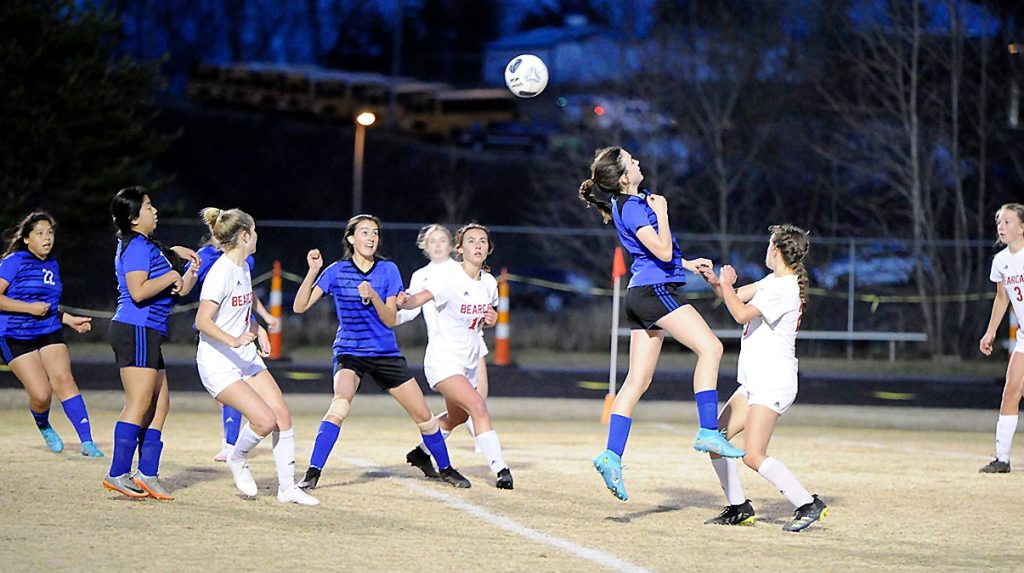 Polk County's Katie Mullet is focused on a corner kick, waiting to head the effort, during the second half of Tuesday's match

A two-goal first half provided all the scoring that Hendersonville needed Tuesday, that flurry powering the Bearcats to a 5-1 victory over Polk County in G.M. Tennant Stadium.

Hendersonville (6-2, 4-0) remained tied with Brevard atop the Mountain Foothills 7 Conference standings with the win. Polk County dropped to 2-6, 2-2.

The Bearcats scored twice in a seven-minute span near the midpoint of the first half, then added two more goals in the opening 10 minutes of the second half to grab a 4-0 advantage.

Hendersonville upped the lead to 5-0 before Polk County finally broke through with just over five minutes left in the match.

Ella Waldman received a long free kick deep in the penalty area and poked a shot past the Bearcat defense that bounced off the left post. Caroline Taylor, racing in from the left side, corralled the rebound and directed it into the right side of the net.

The Wolverines are scheduled to continue conference play on Thursday, traveling to East Rutherford for a 6 p.m. match. The game is scheduled to be shown live on NFHS Network.