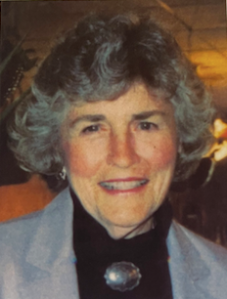 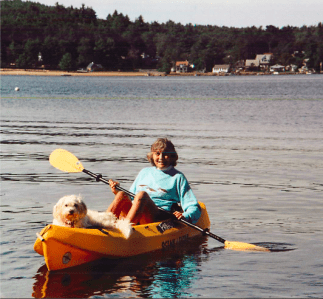 Ellington, CT– Margaret Ellen Sertl, known to many as “Mig”, passed away peacefully on Tuesday, February 22, 2022. She was 98 years old.

An Enfield CT native, she was the daughter of Hattie and Everett King. Mig graduated from Enfield High School in 1941. When WW II created a need for draftsmen, Mig studied engineering Drawing. She was soon employed by American Bosch in Springfield, MA.

Mig started showing an interest in drawing as a child. She became an accomplished artist and painted avidly throughout her life in oils, acrylics, and watercolors. One of her favorite subjects was the Maine coast and its harbors; but she also enjoyed painting nature, animals, and people. She was a member of the Tolland County Art Association and Tryon Painters and Sculptors.

Cartooning, illustrating, and crafting of all kinds were also some of her artistic hobbies. Mig had a great sense of humor, and this was often evident in her work. She loved sharing her creative imagination with others. Mig illustrated several children’s books for a local author. She was often called upon to draw logos and sketches for various associations.

Mig met Frank Sertl, of Schenectady, NY, on a snow skiing trip with mutual friends. They married in 1948. Frank was a chemical engineer and employed by Bigelow Carpet Company. Upon accepting a position as plant manager for Landrum Mills, they moved their young family to Tryon, NC.

In Tryon, Mig volunteered her talents to numerous civic and social organizations. She was a member of the Holy Cross Episcopal Church, Daffy Jills Garden Club, PTA, and St Luke’s Auxiliary. One of her many projects was making decorations for the charity balls held at Oak Hall Hotel.

Frank died in 1970 after a long illness. The family had already moved to Connecticut to be closer to family. Mig soon returned to drafting and was employed by Carlyle Johnson Machine Co. until her retirement. She enjoyed the camaraderie of her co-workers in the engineering department.

Mig lived on Crystal Lake in Ellington, CT for over 42 years. She loved sailing, kayaking, and swimming with her dog Heidi. Mig also hiked with the local chapter of the AMC and climbed Mt. Washington in NH several times with family. She cherished her friendships and had many “get-togethers” at her home with neighbors, friends, and family.

A lover of nature and animals, Mig was passionate about the wellbeing of the natural habitat of the lake. She had a soft spot for salamanders and frogs. Every spring she would put out a salamander crossing sign that she had made in to warn others during their annual migration.

Mig never felt too old to make a snowman, and there were many. She will always be remembered for her generous, fun-loving spirit, warmth, and smile.

In addition to her parents, Mig was predeceased by her husband, Frank C. Sertl, and son, Mark F. Sertl. She is survived by her daughter, Leslie Brooks Correll (Boyd) of Tryon, NC; Sister Harriet “Hat” Markert (Bob) of Westborough, MA; Grandchildren; Troy Brooks of Vilas, NC; Corbin Brooks (Melanie) of Tryon, NC, Kerry Cummings, and Amy Joy of Martha’s Vineyard, MA; two great-grandchildren, and a lifetime’s worth of friends.

Mig will be laid to rest next to her husband in the Hazzardville Cemetery in Enfield CT. A celebration of life will be held in Connecticut Later this year.

In lieu of flowers, a memorial contribution may be made to Paws, Prayers & Promises at 685 Carriage Row in Tryon, NC, Foothills Humane Society, or a charity of your choice.