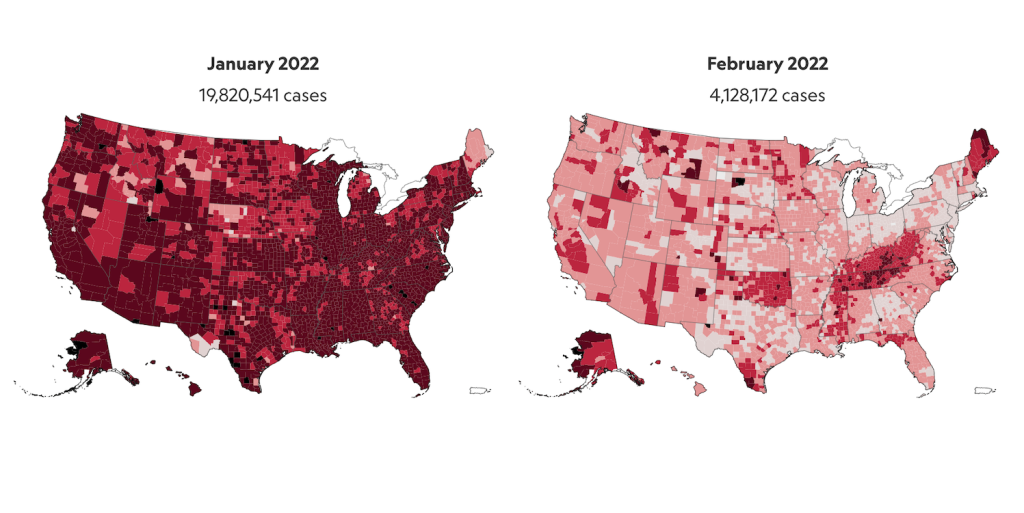 How the virus looks different two years after the pandemic began

POLK COUNTY––Polk County Covid-19 cases have gone down in the past couple months, reports say, after a spike in cases last January.

On January 18 of this year, 190 new cases were reported in Polk County with a new daily average of 46. The daily average dropped significantly every day up to March 21, when the last report was updated. On March 21, there were only 4 reported new cases of Covid-19.

Nationwide, the spike of January 18 followed a record-high for Covid-19 cases that occurred just days prior on January 10, when 1,433,977 new cases were reported. January 18 held the second-highest national record of 1,178,403 new cases.

In January of 2021, there were just over 6 million reported Covid-19 cases nationwide, according to National Geographic. By comparison, last January  there were nearly 20 million cases reported. As a result of the drastic plunge in Covid-19 statistics, the following February claimed just over 4million cases of Covid-19.

However, new cases suddenly dropped over February and into March, as there were only 25,459 new cases recorded on March 22.

Michelle Fortune, Chief Executive Officer at St. Luke’s Hospital, says that the Polk County region has experienced surges with the different variants following events where people were more likely to gather unmasked and not socially distanced.

According to the NYT tracking and case counts, at least 1 in 6 Polk County residents have been infected by the virus since the beginning of the pandemic in March 2020.

Fortune says of the overall trends of severity of symptoms, “We have seen less need for critical care overall as a trend in 2022; we hope this trend continues.”

She says, “Two years into the pandemic, we know more about how to treat the virus. We also have the benefit of vaccination. We are hopeful that as a nation, we are heading toward an endemic state now, versus as pandemic state. Once we can reach this, we will experience seasonal surges but hopefully at a level that is more manageable and less impactful, particularly given the availability of vaccines.”

Fortune says that most hospitalized Covid-19 patients have been unvaccinated, as the majority has been both statewide and nationwide.

According to National Geographic, in the past two weeks there has been one reported Covid-19 case for every 1,461 people in Polk County.

Movie producer to make a documentary on Tryon