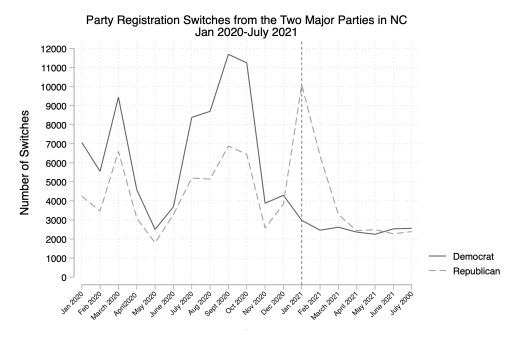 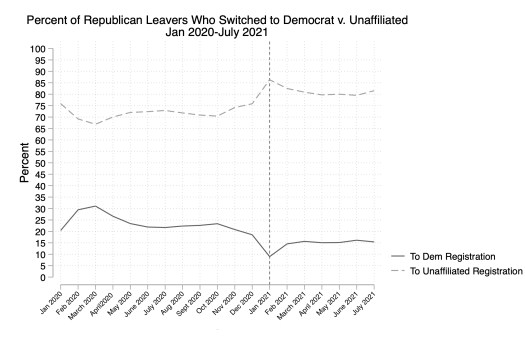 The North Carolina State Board of Elections last Friday released voter registration data that shows Unaffiliated voters have become the largest voting block in the state, edging out registered Democrats, according to Dr. J. Michael Bitzer, professor of politics at Catawba College in Salisbury, N.C.

The Unaffiliated voter numbers across the state have been on a steady rise for the past two decades, according to data released by the NCSBE, outpacing the number of registered Republicans in 2018, and now outpacing registered Democrats in 2022.

Unaffiliated, Democratic and Republican voter pools all experienced notable losses between January and February 2021 at the local and state level.

In Polk County, Unaffiliated numbers dropped by 391, Republican by 353, and Democratic by 339. By March 2021, a reordering of the electorate can be seen and all parties saw their numbers rebound with varying degrees of strength. From January 2021 to March 2022, Unaffiliated voters have a net loss of 1.2 percent, Republicans at 3.3 percent, and Democrats at 7.8 percent.

At the state level, Democratic voter registrations dropped between January and February 2021 by 138,569; Unaffiliated by 110,209; and Republican by 87,901. A rebound can be seen by June for Democrats, May for Republicans, and March for Unaffiliated, however, year to date, Democrats have taken a 4.8 percent net loss, and Republicans a 2.7 percent loss. Unaffiliated voters, however, have seen a 1.3 percent gain.

The data on party switching, according to political science professor Dr. Chris Cooper of Western Carolina University, show that the number of Republican switchers “spiked” while Democratic switchers fell in January 2021.

“It’s interesting to note, though, that the folks who left the Republican Party in January 2021 were even more likely than they normally are to go to Unaffiliated,” he said.

In looking at the big picture, Cooper said, “Party change can happen through generational replacement, migration, or party switching. After January 6, there’s no doubt that the number of people who switched party registration took a big drop in North Carolina — no doubt related to the events of January 6th. While some did switch to the Democratic Party, the lion’s share (about three-quarters) switched to Unaffiliated.”

In the data it is important to note there is a mix between party switchers, new party registrants, and people who were dropped for list cleaning.

The dip in numbers for the Democratic party, he said, could be accounted for as part of a longer-term movement away from the Democratic Party in North Carolina.

“Democrats have been the most populous party in North Carolina politics for the entirety of its history. Until now,” Cooper said.