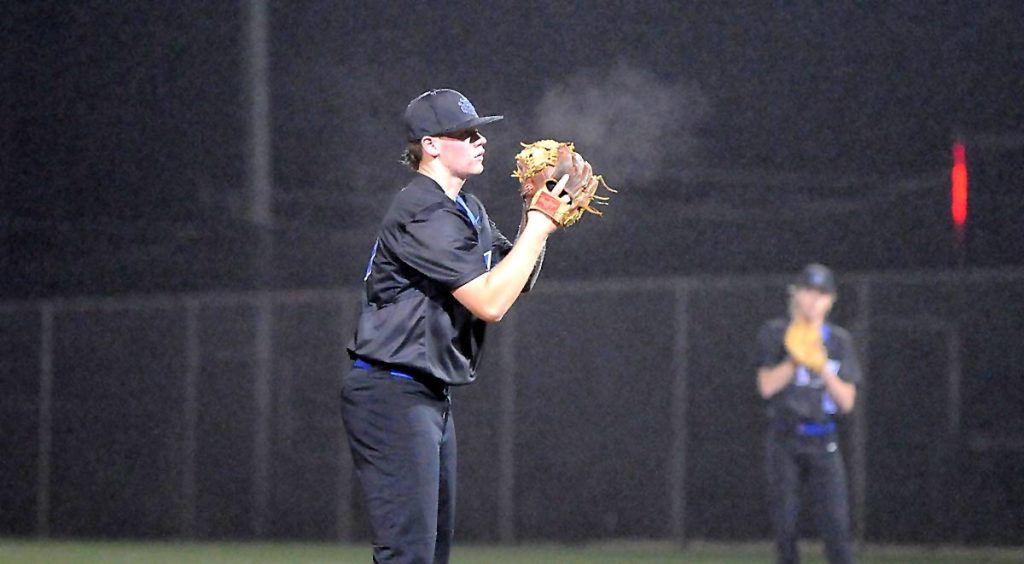 Before the first pitch and before the rains came, Billy Alm gathered Polk County’s baseball squad in a tight huddle.

Just another game, he stressed. Don’t let the moment become too big.

And the Wolverines listened – to an extent.

“I’m so hyper right now,” one player said in the dugout. “I went up to hit and I could barely breathe,” said another.

The emotions soon dropped to more normal levels until game’s end, when Polk County celebrated a 7-5 victory over its Thermal Belt neighbors in the first meeting between the two schools in several seasons.

It wasn’t the prettiest of games, with the rain that began falling in the second inning making for a challenging evening, especially on the mound. The two teams combined for 18 walks and five hit batters, 11 of those walks by Landrum pitchers. Polk County (3-1) scored its seven runs with just two hits.

“We’re super stoked to be back over here playing. It’s fun with the rivalry,” Alm said. “We had some positive at-bats and got some walks. We’ll get back on Monday and get back working on some of the little details.”

Micah Hill struck out 11 in five innings, his glove no doubt seeming on fire at times to Landrum batters

The Wolverines received a solid start from senior Micah Hill, who allowed just two hits and struck out 11 in five innings. After Landrum (4-2) cut a 7-0 Polk lead to 7-5, Casey Beiler entered and pitched a perfect seventh inning, with two strikeouts, for the save.

“Micah dominated on the mound,” Alm said. “Casey did an awesome job of going out there and competing.”

Polk tallied quickly, scoring twice in the opening inning. Coble Cameron reached base on a dropped third strike, Angus Weaver walked and Micah Hill was hit by a pitch to load the bases. Jackson Beiler followed with a screaming line drive to center that scored Cameron and Weaver for the 2-0 lead.

Polk added a run in the third on a bases-loaded walk to Cameron, then racked up four more runs in the sixth on three walks, a hit batter and Landrum error.

The Cardinals answered in similar fashion in the bottom of the inning, as four straight two-out walks, Jesse Bowers’ double into the left-field corner and a throwing error cut Polk’s lead to two runs. Beiler, though, made that advantage hold in the seventh.

Lawson Carter had Polk’s other hit.