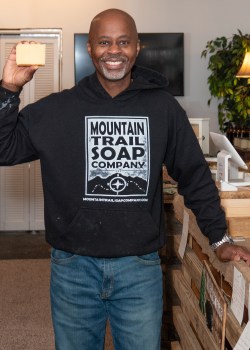 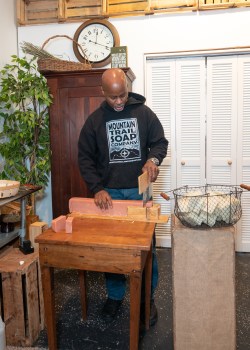 Robert cuts slices of soap out of a newly made loaf. He's even had kids come in to cut their own. Robert also hand makes soy candles in a variety of scents. 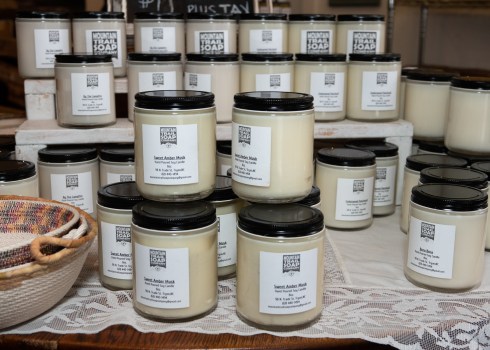 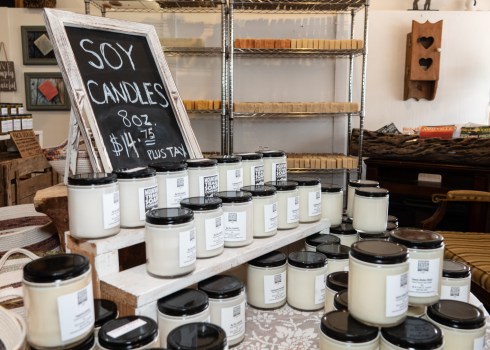 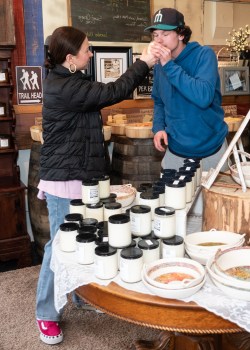 Tanya and Daniel Shelest, sister and brother from Inman, have a hard time picking out their favorite. They settled on a variety. 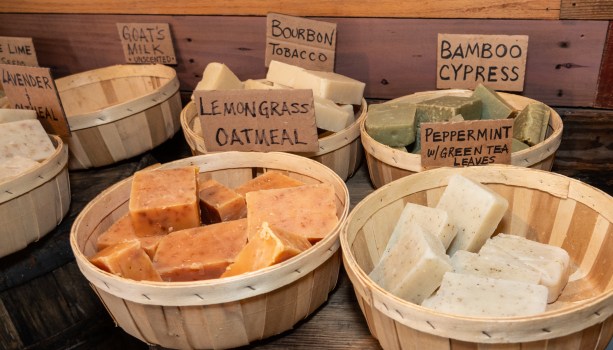 Baskets of soap ready for the sniff test. 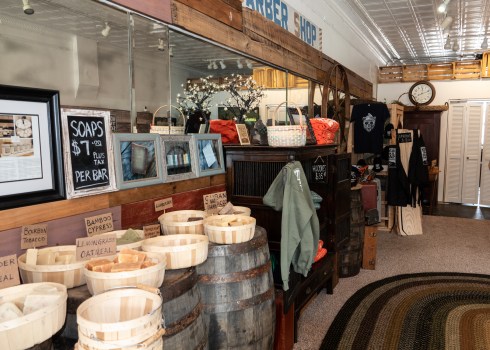 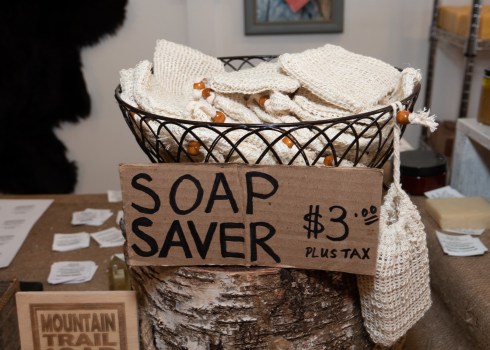 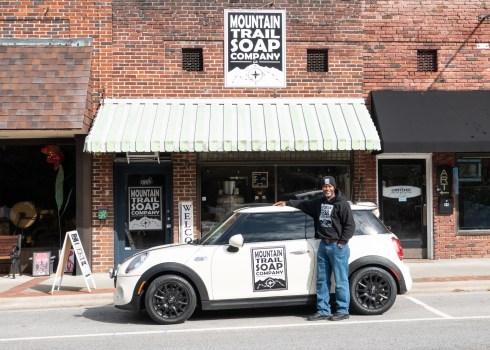 Robert Mangum is proud of his shop in downtown Tryon. It's a dream he made happen.

When you walk into the Mountain Trail Soap Company store on Trade Street in Tryon, you’re going to experience something special. Owner Robert Mangum is the kind of person who will make you feel at home the moment you enter. When you leave 15 or 30 minutes later, you’ll know you’ve made a new friend. Robert is outgoing, friendly, and welcoming…three things everyone should appreciate in a shop owner.

But Robert is not just the owner, he’s also the soap maker…and maker of several other products just waiting to be sniffed. When you walk in…you’ll gravitate to the counters and shelves as your senses are flooded. Instinctively you’ll start sniffing one “flavor” after another. Robert probably calls these “varieties,” but they smell like you need to taste them.  All these soaps are made by hand by Robert. There is nothing mass produced in this shop by some factory hundreds or thousands of miles away.

Robert Mangum is not your typical soap maker. In soap maker’s terms, he doesn’t fit the mold. For over 12 years before moving to Tryon and opening his shop, he was a lieutenant with the Buncombe County Sheriff’s Department in Asheville. A career in law enforcement and a career as a maker of wonderful-smelling body products doesn’t quite seem to go together. Robert loved his job in law enforcement, but he has always wanted to have his own shop. Relocating to Tryon was a dream come true. He says, “It was more of Tryon choosing me.” Robert and his fiancée had been looking at several mountain towns as a place to settle. He had never been to Tryon, but when he visited for the first time, walked the downtown streets, and met people…he knew he was home for good.

Robert has been making soap since before he opened this store in December 2020. He started over 20 years ago out of the necessity of providing some relief for his sons who suffered from eczema and extremely dry skin issues. He says, “Using top brand commercial soaps only made matters worse.” Robert knew there had to be something better for his sons and he figured he was going to be the one to make it.

Through a lot of research and experimenting…he arrived at the right combination of natural ingredients that provided the benefits he was looking for. Then, as now, Robert uses unscented oatmeal, goat’s milk, and honey as some of his primary fixings. The oils he uses are olive oils and coconut oils. There’s a definite science and art to the whole process. Robert precisely measures out each ingredient, so every bar is exactly perfect. When a repeat customer comes in and wants their favorite, he or she will know it will be just as great as the last bar.

Including four weeks for curing, it takes about five weeks to go from mixing to being ready to use. Robert says, “Soap is like a fine wine, the longer it ages the better it is.”

His soap did wonders for his sons and in fact, it’s the only soap they use today as adults. Robert knew others could benefit from his product, but he needed a way to get his soaps on the shelves. Colleagues and friends have always known and supported Robert’s soap “business,” so he had a base of loyal customers from the start. But it was a giant leap of faith to leave a full-time paying job with benefits, move to Tryon, buy a house, and open a soap store. Everything came together, and all the decisions felt right. It has been a fateful move that Robert says has been a blessing.

Mountain Trail Soap Company sells more than homemade soap. He also makes Dead Sea salt scrubs, lip balms, bath balms, and beard oils. Soy candles…yes, he makes those too. There are a few items he doesn’t make but gets sourced locally as far as possible. Shelly Self, a local craftsperson, makes the pottery soap dishes that complement Robert’s soaps. You can also pick up some logo items including t-shirts and sweatshirts. Robert has been told of folks seeing his logo clothing in places like Detroit, Charleston, and others. Favorite soap “flavors” include lemongrass, pinecone lime, cranberry salsa, bamboo cypress, and sweet orange and clove. He also has more “exotic” flavors like morning coffee, Cuban tobacco, and monkey fart. (Yes, monkey fart.)

While items aren’t available for direct purchase online, Robert sends out items daily to consumers across the US and around the world. Wannabe customers can check his website (link below) to see what he has and then email, text, or call.

“I can guarantee an extremely high-quality product. Everything I make, I use. It’s a very well-made, authentic product,” says Robert. His following agrees. I believe in my products, and I believe in myself. He’s learned to turn negatives into positives and won’t let discouraging words keep him from trusting in himself. He knows he has been blessed and is thrilled to be a part of this community. To Robert, even though he’s only lived here a couple of years…it’s a perfect fit. This confidence has led Robert to be successful beyond his imagination in getting a new business started during a pandemic. Robert dreams of one day buying the building he’s in. He’s here to stay.

Hours: Tuesday through Saturday, 11 to 5.

Robert is also a professional photographer. You can see his portfolios at: www.robertmangumphotos.com.